As music educators, we all know the importance of routine. Whether it’s an individual’s routine for practicing alone, a concert band rehearsal starting with scales and warm-ups, or the music and visual routines that start a marching rehearsal; maintaining consistency is important for students to improve by building on a foundation. At every rehearsal, students in a band gain confidence in the fundamentals they practice. Yes, some may get bored, but most students get to the point where these routines are comfortable and relatively easy.

The goal with musical and visual fundamentals is that they transfer to the field, in repetitions at rehearsal as well as performances. However, as we approach the end of the season, there comes a gradual shift in focus from learning the show to cleaning it. Below are some ideas about how to balance the routine with new information as the ensemble shifts toward cleaning.

One thing I’ve learned during my time teaching with the Bluecoats is the importance of specific information delivery. Only toward the beginning of a season is it valuable or worthwhile to make very broad, overarching comments and corrections to the group.

During the learning process, it is harder to apply information given as corrections. This is because students are still processing the overwhelming amount of multitasking they are engaged with learning a marching show. As they approach and surpass the point of having their show memorized (both drill and music), they are able to absorb a higher quantity of information and apply it more quickly.

This, in my opinion, is the primary reason for the end of season boost that many experience. The fundamentals and show itself have become subsumed, and musical and physical muscle memory kicks in more and more.

If you make a comment that isn’t completely true and accurate to the error and/or the people who made the error, you run the risk of creating more issues. Sometimes those issues can be small but develop into larger problems later. To that end, it’s important to think about the type of information you deliver.

Here is one example:

There are a few things to parse from this example:

First, is one of my personal pet peeves – the difference between slow vs. late. There’s a difference between playing an incorrect tempo (which may or may not begin at the right time) versus playing something at the correct tempo, starting behind where it should. Similar problems occur with the words “fast” and “ahead.” Please be conscious of the distinction between them when giving corrections!

As you can see, the positive category addresses the fact that the student made a mistake, but does not make them feel badly about it, and is followed with an encouraging comment to help fix the error. The negative comments often make students feel shamed, and will ultimately be a less effective tool for communication.

This language can be tempting when you’re frustrated and can’t seem to effectively communicate how to fix an error. This is especially true when it keeps happening.

Remember to take the high road and stay positive!

The other consideration is true versus false. Giving a student true information will ALWAYS be more effective than information that is partially or entirely false. Though this may seem obvious, I’ve witnessed (and occasionally perpetrated) examples of giving false information.

The slow/late or fast/early issue is a big one, but another major distinction is that of foot timing. If they didn’t hit their dot, but their feet are in time, it’s likely a step size issue, or possibly a pathway. Giving this false information can seem harmless, but continued reinforcement of incorrect perceptions can make marching and visual achievement very difficult in the long run for those students.

Be careful of the language you choose to use when delivering information and corrections to your students.

Remember that broad comments to the whole music ensemble are generally only effective early on. These include topics such as:

Very quickly (usually mid-season), it becomes time to start moving away from those.

As we approach the end of the marching season, tailoring your information to be more specific will usually yield quicker results. The best corrections are the ones that are true and positive, and delivered to specific people. The recipients of the correction should have actually made the mistake, know they made it, hear the correction, and apply the information the very next rep.

It’s important not to give broad comments such as “trumpets, don’t be late” or “altos, you’re flat” when this is only true for one or two people. Perhaps your more mature students will be able to hear a comment like that and know it might not apply to them, but students can often over-correct given that type of information. Worse yet, if they hear it over and over, they’ll begin to re-calibrate what their perception of that margin of error is (continue to overshoot a dot, or play too soft, etc.).

We want students to understand the depth to which their mistake occurred and how to fix it. At the same time, we’re tasked with delivering this in never-enough-time, and as clearly and simply as possible.  As an instructor, I’m constantly striving to spot individuals first in order to deliver several corrections to each person at the end of a rep. The goal is to help them fix one specific thing and have it stay fixed.

If I realize that a few people are making this mistake, I will often make a general comment to a section or the whole marching ensemble. I might use phrasing along these lines:

“Hey band, make sure that your entrance on beat 3 is exactly in time. Listen to the drums on the first two beats and coordinate your breath with their rhythm. Some of us have a tendency to not take a full breath and might come in early.”

In this scenario, my audience is bigger, so my comments are more flexible. They hear things like “might, tendency, sometimes” and then they have to be a bit more critical in their own evaluations.

Avoid making corrections, then not giving the students a chance to apply the information and fix the error. Of course, sometimes this is inevitable when you have to move on for time. If they are very small corrections and the students are mature enough to be able to process and apply it the next day, then great. However, most learning styles need other types of reinforcement for a correction to stick.

Choose your battles! If it’s big enough to make a comment from up top, it should be big enough to do the rep at least once more to get it right. 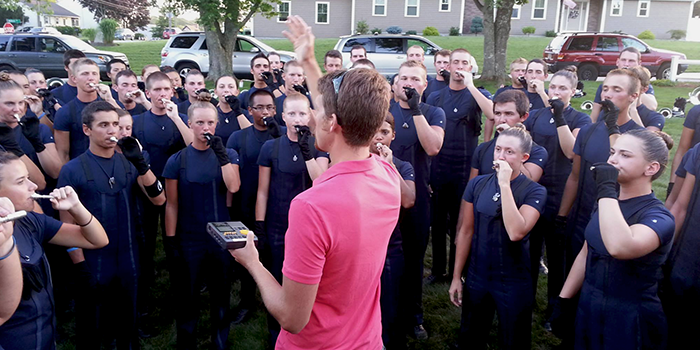 So as we approach the end of the season, ask yourself if you are being consistent with your approach to rehearsal. Of course you still need to do some marching basics and some music warm-ups. But are you so focused on getting to one project or another that you might short the kids some necessary routine time? Be aware of how that change might affect their engagement in rehearsal.

I think it can be useful to slowly reduce the amount of time spent on marching basics as a whole, as long as you’re still addressing the fundamentals of marching. Better yet, tailor your basics time to specific skills that are used throughout the show. It’s the same with music rehearsal. Perhaps you don’t need to play the entire combination of warm-ups/scale patterns/slurs, etc., but make sure to still hit a good cross section of them.

As a brass player, I rely on warm-ups religiously, so be careful with reducing warm-up time too much. Of course, every marching program has different strengths and weaknesses. If you feel that you’re solid on the show musically, then by all means spend more time on basics and cleaning drill. Just make sure that the changes you make to rehearsal are gradual ones.

The confidence that students gain from the musical and visual routines of rehearsal can be undermined by drastically reducing them, changing the order of rehearsal too quickly from day to day, or jumping around too frenetically when cleaning parts of the show. Try to balance the changes in rehearsal focus with the routine that’s established. Use the top-to-bottom progression of the show to your advantage to help schedule a coherent rehearsal.

My last thought is about the importance of repetition and positive reinforcement. These go hand in hand, and become of the utmost importance toward the end of the marching season. Don’t be afraid to compliment the ensemble, or better yet, specific individuals! This typically has the effect of boosting egos and confidence, which can be contagious, creating a positive vibe in  rehearsal.

In our pursuit of perfection, sometimes we can lose sight of the art and pageantry we’re trying to produce. And after a great rep, there’s nothing wrong with just saying “Good! Reset and do it again!” That should ultimately be the goal, where mistakes are small enough that it’s difficult to make any corrections at all. Some programs are lucky enough to experience this at some point in the season. Others will always have major things to work on. Just remember the power of positive reinforcement and praise students with when they’ve worked hard enough to deserve it.

In the words of Bluecoats brass arranger Doug Thrower, “the work doesn’t change.”

No matter what level you achieve, there’s always work to do. Every program I‘m at, I try to instill the work ethic of striving for perfection. This is always tempered with the knowledge that in many ways, it’s unattainable. It’s the pursuit that makes it worthwhile, and the work that makes students better people later in life.

Stay positive, and finish strong to the end of the season! Then, we can all catch up on sleep just a little bit after it’s all over…

Ryan Spencer is a professional trumpet player and freelance educator in Denver, Colorado. He recently finished his 5th season on brass staff with the 2016 DCI World Champion Bluecoats Drum and Bugle Corps.

Ryan maintains a private brass studio, and works with several marching programs in Colorado, teaching both music and visual. He is a composer and arranger and also does design consultation for marching programs. Ryan performs with the Denver Philharmonic, Stratus Chamber, and Cheyenne Symphony Orchestras, as well as playing regularly with Pikes Peak Brass Band and Denver Brass.