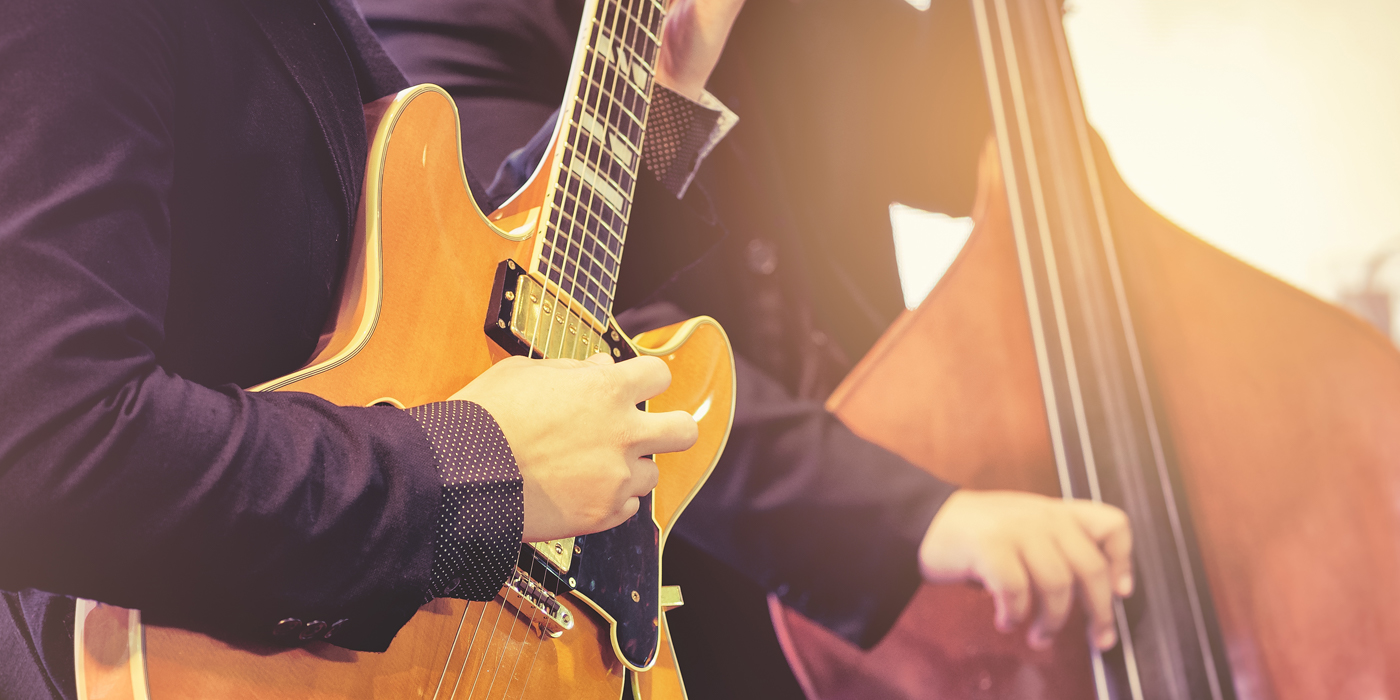 With very little background in playing guitar, and no background in jazz guitar pedagogy, many band directors find themselves at a loss on how to help their jazz band guitarist. The following tips can help you point your student guitarists in the right direction.

Getting the Sound: The Right Guitar

A good place to start is helping the guitarist get a good sound. Many young electric guitarists will come to the jazz band rehearsal with a solid body electric guitar (an electric guitar that is made of a solid piece of wood). These guitars are great for rock and roll, blues, and funk.

The more mellow, fully hollow body guitar has a rich tone, but can feed back if the volume is up. To eliminate the feedback, the trick is to cover the f sound holes. F hole plugs are available or can be made. In a pinch, simply covering the f holes with tape can help to reduce feedback, but be sure to use painters tape or something that won’t damage the finish.

Very often the jazz band guitarist shows up with an instrument that is set up more for playing rock and pop than jazz. To enable those guitarists to get an acceptable sound, it is not necessary for them to go out and buy a new guitar and/or amp. The electric guitar used by young students can be modified by changing the strings to get a jazz tone.

For example, many young electric guitarists have a solid body electric guitar with light gauge strings on it. Changing those strings to a heavier gauge will go a long way in helping achieve a jazz tone. Rock, pop, and blues guitarists often use strings that begin with a .09 to .010 first string (this is the diameter of the string). To achieve a jazz tone, the string set should begin with an .011 or .012 first string. The heavier string gives a richer tone and will stay in tune.

The Pick to Pick

The thickness of the pick used by the guitarist will change the tone. It seems that the longer a student plays guitar, the thicker the pick they will want to use. A thick pick will fatten the tone. Thin picks bend too easily and can often have a thin tone not suited for jazz. Also, a pick that is more rounded may sound better for rhythm playing that the sharp-angled pick.

Knowing how to adjust the settings on the guitar and the amp can be a major factor in achieving a jazz sound. For starters, have the guitarist use the neck position pickup for most traditional jazz sounds. The neck pickup is the more mellow sounding pickup. The bridge pickup can be reserved for a brighter sound with more bite.

Next, roll off the volume a bit on the guitar. By turning down the volume knob on the guitar 10 to 20 percent, some of the high edge will disappear from the sound, leaving a warmer tone. If more volume is needed, turn up the volume on the amplifier.

The first step in doing this is to have the guitarist not worry about playing every chord if there are a lot of chords in one measure. The chords on beats one and three need to be played. Many of the others (if not all) can be omitted.

Next, if some of the chords sound complicated reduce them to major or maj7, m7, and 7 chords. For example, you might reduce G7b5#9 to G7. Some chords, like diminished, augmented, and m7b5, can’t be reduced. They will have to be learned or omitted.

Many young jazz band guitarists will begin their journey in jazz band with a knowledge of barre chords. One of the best cures for having for getting the right sounding chords and making chording simpler is to have your guitarist learn “color-tone” chords. These chords are often referred to as Freddie Green chords, named after the famous guitarist with the Count Basie Orchestra, Freddie Green.

When playing color-tone chords with the root on the 6th string, Freddie Green often played only strings 6, 4, and 3 (muting the 5th string). When the root was on the 5th string he’d commonly play only strings 5, 4, and 3. These chords contain a root, third and a seventh or sixth. The seventh and sixth are the “color-tones.”

Practice the following progression using the sixth-string root chords above.

Have students practice the following progression using the fifth-string root chords above.

Practice the following progression using these Freddie Green style chords from both the sixth- and fifth-string root categories. When changing chords, select the chord (fifth- or sixth-string root) that is closest to the chord just played. Keep the fingerings close to one another. You may have to find both versions of a chord to see which one to play next.

The first accompaniment pattern the jazz guitarist should focus on is playing a four-to-the-bar pattern. This means playing one down-strum on every beat. Occasionally, an up strum can be inserted on beat “four and.” This is much the way in which Freddie Green played. There should be a slight accent on beats two and four, and the strums should be short…but, not too short.

The left-hand fingers can lift up after each strum. The fingers should not lift off the strings, but lift up enough for the strings to stop vibrating. When this strumming technique is combined with the color-tone chords (Freddie Green type), it provides a good, solid rhythm for straight-ahead jazz.

As an alternative to playing four to the bar, the rhythm guitarist can add interest and a strong rhythmic groove by comping. The word comp is short for accompaniment. Some would argue that it comes from compliment. It is a term used to identify playing short rhythmic patterns rather than doing a folk type strum pattern or playing four to the bar. To comp adds interest to the accompaniment and provides a solid foundation for a soloist or ensemble.

Shown below are some of the more popular comp patterns. The patterns take one or two measures to complete and may be combined. Down-strums should be used almost exclusively. Occasionally, an up-strum may be used on the second half of a beat. To learn the patterns, a blues could be played using the same comp pattern in every measure, and then practice combining two or more of the patterns. Notice that pattern 8 is a combination of patterns 6 and 7. Gradually, more patterns can be combined.

Work With (Not Against) the Piano

One of the biggest challenges for the jazz band rhythm section is having the pianist and the guitarist work together, rather than fight each other. To reach this “peace agreement,” it’s important that the pianist and guitarist listen closely to one another. If the piano is playing complex comp patterns, the guitar should lay back and play sparingly. If the guitar is playing busy, then the piano should play thin. Either instrument may also lay out completely for a chorus, to allow the other to play.

Have your students listen to Count Basie and Freddie Green. Freddie always provided the foundation and Basie played only occasionally, but in just the right place. The way they worked together was like magic. Also, if the guitar is playing chords that are voiced low, the piano can play chords voiced high, and vice-versa.

To have your students absorb the concept of great rhythm guitar playing and playing correctly with a pianist, it’s important that they listen to the pros. Listed below are some of the great artists who play impeccable rhythm guitar and work amicably with the piano player:

In this blog, I have focused on rhythm guitar playing for a basic jazz style. There are many techniques in playing many other styles including Latin, funk, rock, and others. With each one of these styles, there are tricks to getting the right sound and playing accompaniment patterns that are stylistically correct. But, that’s a topic for another blog. 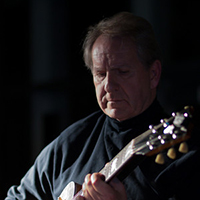 Mike Christiansen is professor emeritus in the music department at Utah State University where he founded, then directed the guitar program for 39 years. In 1994, he was selected as Professor of the Year. In 2012, Mike was selected as a U.S. Carnegie Professor of the Year. In 2013, he was invited to be a TED speaker. He has authored/co-authored over 40 guitar instruction books and appears on hundreds of instructional videos. Mike has backed up many artists and is an active performer as a soloist and with various groups. He is currently director of curriculum for Consonus Music. For a free 60-day classroom trial for Consonus Music Institute’s blended learning guitar and ukulele curriculum, click here.