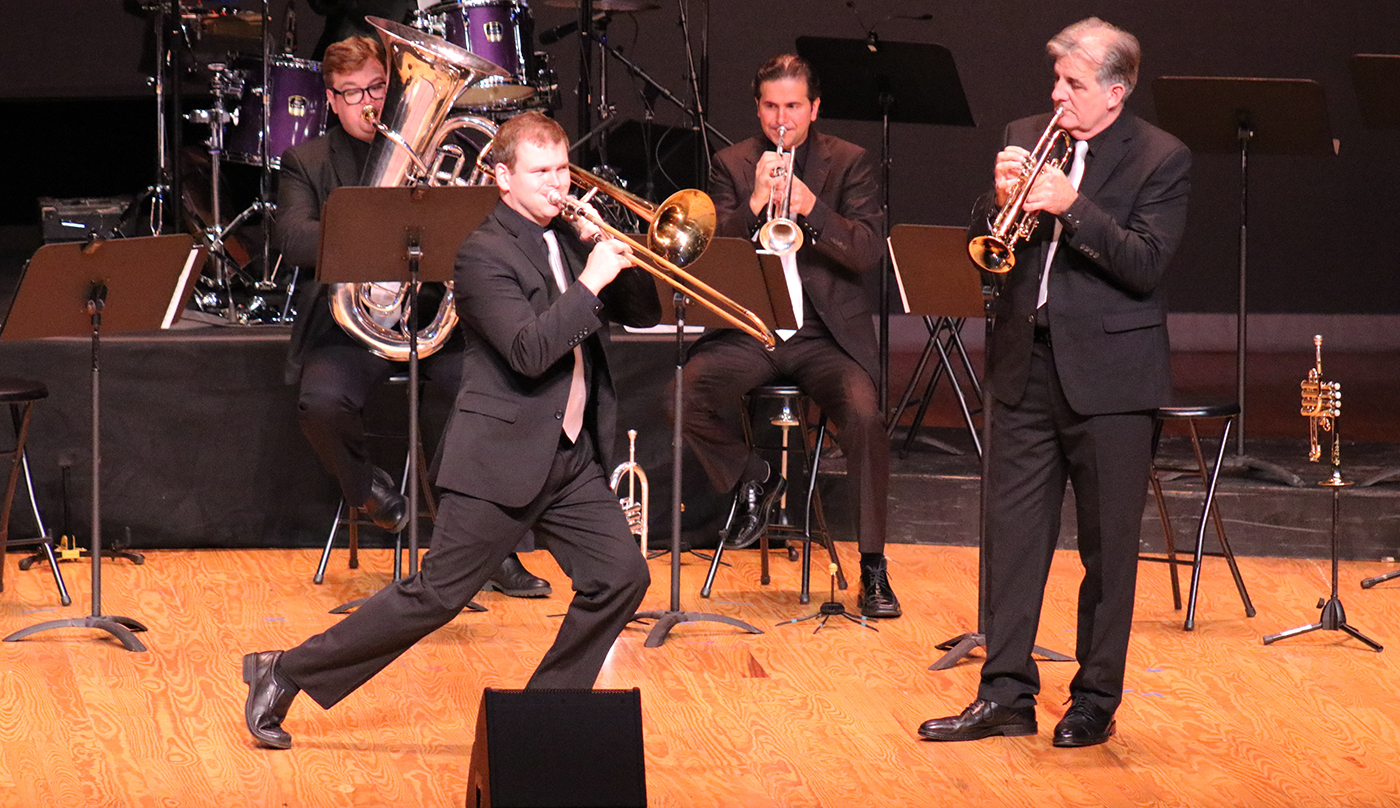 Upon first seeing a trombone, anyone can recognize that controlling the slide is going to be important.What few people realize is that the effects of slide technique extend well past the slide itself. In fact, developing good slide technique can help fix many issues. Today I’d like to share a quick crash course on slide technique, discuss some less obvious consequences of poor slide technique, and give you some exercises to help your students excel.

Before we begin, however, I feel compelled to offer a disclaimer. This is not “slide gospel.” There are a lot of different ways to have success with the slide. My goal is to simply describe what has helped me develop into a more efficient trombonist. 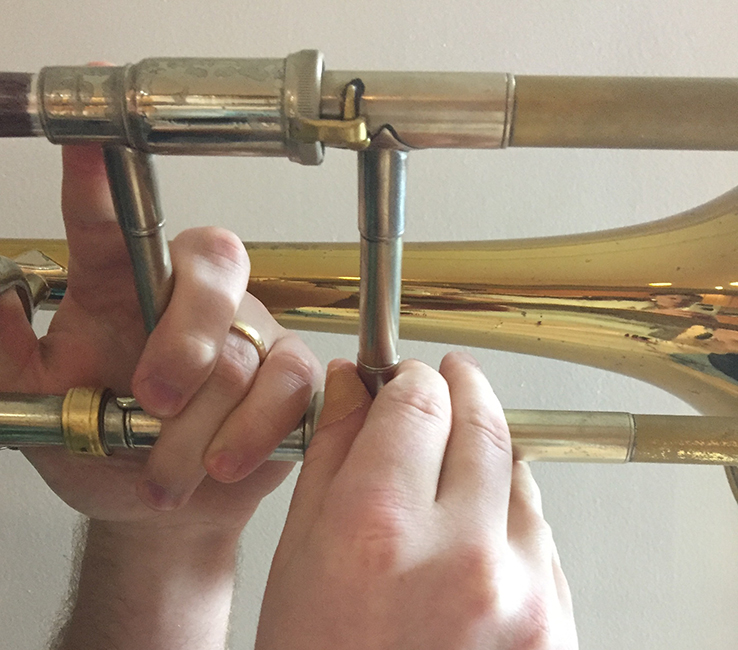 Also, I have the slide rest at about the top knuckle on my fingers. Doing this (as opposed to draping the fingers over the slide) allows me a greater range of motion with the hand and wrist. 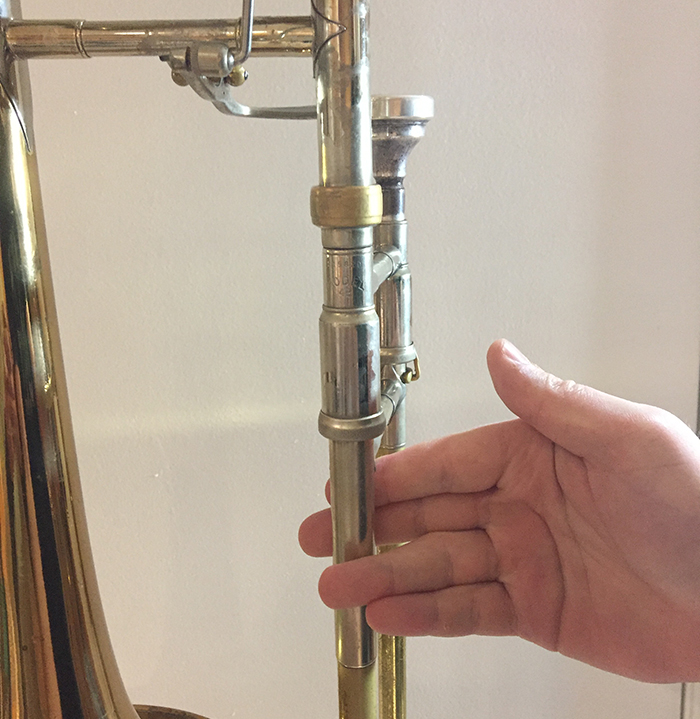 These techniques serve the overarching purpose of giving me a comfortable sense of a control and flexibility with the slide.

A common point of contention is whether or not to allow beginning students to let go of the slide in third or fourth position to “check” the position against the bell. I would advise against this for two main reasons. First, letting go of the slide gives up some control of the slide, which makes it more difficult to be precise and make quick adjustments for tuning.

Second, touching the bell in no way guarantees students that they will play in tune. We all know there are many different factors that affect tuning: instruments can be cold or warm, groups might not play perfectly to A440 on a given day, even the positions themselves “live” in different spaces from instrument to instrument.

Ultimately tuning is an issue for the ear. When teaching students to play in third and fourth position, I tell them that the positions are “about where their hand is under the bell” and “about where the end of the slide is under the bell” respectively and put my focus into teaching them what it sounds and feels like to play Eb’s, D’s, etc. in tune.

When moving the slide, I try to keep my hand so my thumb is pointed towards me (as opposed to the palm). This allows for more natural motion and less tension, as I’m not twisting my forearm in the process of holding the slide.

In terms of the motion itself, what I’ve found works best for me is to think of the motion as coming primarily from the elbow, but with the fingers and wrist flexible. This should produce a controlled, but agile motion. When moving the slide, I also focus on keeping the motion on an even plane, not bouncing up and down or moving side to side, and being fast enough to arrive at each new note in time for a clean and stylistic articulation.

I formed these opinions on slide technique simply by recognizing difficulties in my or my students’ playing and coming up with the simplest solutions possible. I realize though that some of the difficulties which inform these techniques might not be readily apparent to the non-trombonist.

Next, I’d like to discuss three specific issues that stem from poor slide technique and how each can be addressed with a simple exercise.

Cause: Student is pulling slide down or to the right in an attempt to reach 6th or 7th position.

This occurs when students can’t (or at least decide they can’t) reach sixth or seventh position, and they start to pull the trombone down to the right. This produces a pinched tone as this motion affects the embouchure. Even if the embouchure isn’t directly affected (if a student moves his or her head with the instrument) it will cause some disruption in airflow as the student changes posture. While I could see this being allowed for a brief time to accommodate students who are simply too small to stretch out to seventh position, most students really actually can make this reach and are simply unaware that they are moving the slide in this way.

Solution: Have students glissando from first to seventh, F to B for example. Stand about two feet beyond their slide and face your hand toward their slide. Ask the students to touch your hand with their slide when they reach the bottom of their glissando. This will force them to move out straight and evenly, and will give them a better chance at an even and consistent sound.

Cause: Slide motion is jerky and disrupts the embouchure

First, let me say that technical passages are obviously always an issue on the trombone. Just the sheer geography of the instrument means we have to travel much farther than our colleagues — in the same amount of time — to produce the same results. In the pursuit of speed, it’s very easy to lose control and start shifting the instrument all over the place. My diagnostic for this pretty simple: watch the bell as you or your student plays. If it’s bouncing up and down, the player is at the very least not being as efficient as possible, but could even be moving the instrument enough to affect note accuracy and tone consistency.

Solution: When you notice this in a student, have them play slow staccato quarter notes, first Bb, then C, all while paying attention to the bell of the instrument. Have them attempt to move smoothly enough that the bell doesn’t bounce up and down. As they improve, increase the tempo. Then, start having them do the same thing with five-note scales (Do-Re-Mi-Fa-Sol in a given key). It can really do a lot to improve their accuracy and consistency.

The dreaded “football-shaped” note starts weak and with poor tone, crescendos into better tone, and ends weakly with poor tone. It too can be related to slide technique. Oftentimes when this occurs, the student is moving the slide too slowly and compensating by either “lipping” the note into tune (which affects tone quality) or shying away from the beginning and end of a note because he or she begins to move the slide too early and too slowly.

I often ask students whether they think they need to move the slide faster on staccato passages or on legato passages. Almost inevitably, the students say they need to move faster on staccato passages because they associate “short” with “fast.” This is simply not true, however. By its very definition, legato insists that we leave the least amount of time between notes possible, so as to connect them. In trombone-land, this can only be accomplished by moving the slide incredibly quickly and efficiently.

Solution: Have students perform legato passages using no tongue, but with the goal of making it sound just as clean as when they play it using their tongue. This should force them to start moving their slides faster, so when they add the tongue back into the passage, they can produce a more even legato tone.

In closing, slide technique is a major part of being a trombonist, but its full effect on a student’s playing goes even deeper than most would expect. I hope this gives you some deeper insight into how to approach the slide and helps you develop good slide technique in your trombone sections!