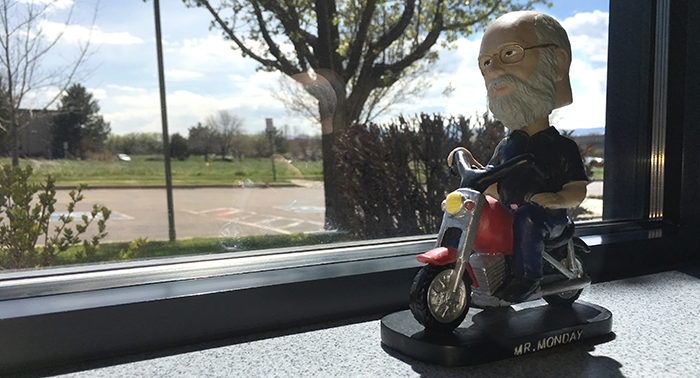 In honor of National Teacher Appreciation Day, we’re celebrating teachers who made a difference.

Show your appreciation by entering your special teacher in a drawing to win $500 in gift cards. Details and an entry form can be found at the bottom of this post.

In further observance of the day, we asked our co-workers for stories of outstanding teachers, and today we’ll share two. While many of us cited music educators, it’s clear that all kinds of teachers made us who we are today. Our first story is about one of those “other” teachers.

“Here’s the deal, kid; this is just another show in just another barn. Work hard, do your best, and be proud. The rest is out of your hands.”

So said my high school technical theater teacher, Terry Monday, to me, as I was freaking out over boxes of broken props, a mere hour before we were to open The Secret Garden on the main stage at the Florida State Thespian Competition in 1998.

Mr. Monday, who presided over my technical theater education at Douglas Anderson School of the Arts in Jacksonville, FL, recognized my love of theater and the performing arts early on. From stage manager, to sound designer, to set designer and costume master, I worked in every aspect of theater, dance, and band/orchestra recital under Mr. Monday’s guidance. His technique for teaching me how to focus a stage light illuminates how he’d put education – and humor – ahead of pretension every time: he took off his ever-present baseball cap and instructed me to shine the brightest part of the light on his bald spot.

The letter of recommendation he wrote for my college applications was similarly unique. Mr. Monday was never too verbose, nor was he effusive with his praise, but I remember his closing remarks. “I have nothing more to say except that she is a damned good kid and you’d be lucky to have her.” At a time in my life when I needed praise and validation for my unorthodox career path, his support made a big difference: that letter traveled with me for years. I come from a family of educators, and for their youngest daughter to announce that she was going to a conservatory to learn Stage Management and then move to New York to work on Broadway, well, it took some convincing. Mr. Monday always reminded me that I was doing what I was meant to do.

Mr. Monday and I have stayed in touch over the years. He always had his favorites, his “kids,” though I’m sure he wasn’t supposed to show any favoritism. A few years ago, while living in New York City and working as a Production Manager at The Public Theater, I arrived home to find a package outside my apartment door. I opened it and pulled out a bobble head figurine that Mr. Monday had made of himself sitting on his motorcycle. No note, no explanation. But I didn’t need one. It was just Monday, letting me know he was still there and still telling to strive for the best. That bobble head now sits on my desk at work, and has since I received it in 2007. It’s a great ice breaker when I start a new job – yet another gift he gave this once shy theater kid.

Good words to live by.

Ashley Trupp is the Event & Partnership Manager at MakeMusic, Inc. She spent a decade working as a stage manager and production manager in and around New York City, most notably at The Public Theater/New York Shakespeare Festival. As an event manager Ashley worked on countless athletic events including the USA Pro Challenge and the New York City Marathon.

She is thrilled to be able to come back to her roots and advocate for arts in education through her position at MakeMusic. Ashley currently lives in Longmont, CO with her husband, three year old son, and their dog, Oliver.

As a high school senior I knew I wanted to go on to music school. I was a very serious student of the jazz saxophone, and fairly knowledgeable about the swing era and historical jazz, but was pretty much in the dark about music made after 1950. Then, through my high school band director, I got to know some music students at the University of Wisconsin La Crosse.

Tom, an undergraduate saxophone student, invited my friend Scott and me to hang out at his campus apartment and listen to music; he would play the records he thought we needed to experience. It was there I heard several saxophone giants for the first time; everything from Charlie Parker to Phil Woods. Tom broadened my musical world by introducing me to a wider range of music. This interaction played a big role in preparing me to become a college music student and a lifelong jazz musician.

Tom Myer went on to do postgraduate work at North Texas and eventually became the saxophone professor at the University of Colorado Boulder. Oddly enough, today Tom and I again live in the same county (although we’re nearly 1,000 miles from La Crosse) and I’m fortunate to work with one of his very capable CU-Boulder graduates, saxophonist Stephanie Doctor, who has high praise for his professorial skills.

But I know from experience that Tom’s dedication to teaching began long he earned his first degree. Thanks to Tom, and every musician who takes the time to share their experience with younger players, and play them the music they need to hear.

MakeMusic QA Tester Doug Rasmussen received his B.M. in saxophone performance from the University of Wisconsin Eau Claire. He spent the 80’s in Seattle where he was a member of the Fred Radke Orchestra. He also played with Gladys Knight and the Pips, the Four Tops, the Temptations and many of the swing era greats including Steve Allen, Helen Forrest, Frankie Lane and Frank Sinatra Jr. Doug was also a founding member of the Jazz Police Big Band and wrote many of the charts played on their two CDs.

After moving to Minneapolis he joined up with MakeMusic and in 2008 formed the ACME Jazz Company, a big band committed to playing original tunes. Several of Doug’s big band and concert band pieces have been published by (and are available from) Really Good Music.

Enter Your Mentor to Win