The January 2015 issue of School, Band and Orchestra features an article by MakeMusic education services specialist Giovanna Cruz. View the article in context here by navigating to pages 26-28, or read the text below.

When I was a student, my teachers always stressed the importance of listening to myself in order to improve. I will admit that the thought of it wasn’t always pleasant, but once I got over the initial shock of listening to myself, I realized that recording oneself (or one’s group) is one of the best tools available for learning. Now, how do we do the same with our students? How do we teach them the critical thinking skills that go along with listening to themselves and making adjustments? As an orchestra teacher for 6 years in Austin, TX and to more than 120 students, I used a variety of approaches to prepare our pieces for concerts. My approach ranged from sectionals, string and full orchestra rehearsals, master classes, professional recordings, and lots of repetition with the graduated use the metronome, to incorporating recording technology during rehearsal and computer-based practice aids for home practice.

We all know that having students collaborate and use critical thinking skills is an important part of the learning process. Students in the music classroom already collaborate when they play together and have to fit their part into the whole. But do they know what they are doing? Do they think about their learning and their performance? Do they know how to fix their mistakes and can they verbally identify the issues? Can they provide each other with meaningful, constructive criticism? Students are already surrounded by technology. How can we best leverage that environment which is now native to them? Trying to find an answer to all those questions I started recording my students, using SmartMusic, Googledocs and padlet.com.

First I started using SmartMusic to help me select the pieces of repertoire that I would include in my concerts. The software’s vast library of titles was a starting point for my programming needs. Why SmartMusic? Because its assessment technology and the ability to provide immediate feedback in visual (green and red notes) and aural form (recording), coupled with the ability of the teacher to give individualized comments to the students, allowed me to reach more students in less time and also to truly track their learning and progress. No longer could a student hide in the back of the second violin section. All of a sudden, I could hear ALL students and address issues at the next rehearsal. Students started to come to rehearsal more prepared and I could truly guide their practice at home by setting the parameters of the assignments that I sent them. Also, every “take” the students did while practicing, was recorded. They could go back and listen to every take and make their own adjustments.

Then, I started recording rehearsals and concerts. I did this two different ways: I had bought a Roland R-05 digital recorder to capture my students’ performances. That device, coupled with a cube speaker right at the front of my classroom and an 8th inch cable, were all I needed to play back the recording. I also started using the computer to record them. SmartMusic has a built in digital recorder. I could just place the computer at the front of the room and record every rehearsal.

After every concert, my students were always eager to listen to their performance. I would play back the recording and then ask them to give verbal feedback. Typically, the most verbal students would talk and the quiet ones would remain to themselves. So I decided to turn the tables and make the activity much more interactive by incorporating technology the next time we had a concert.

Our next concert took place about two weeks before going to the state contest (for those readers in TX, that was UIL Concert and Sight Reading). It was a sort of pre-contest run, to see how we were doing, what we still needed to work on, and also to give the parents of the students an opportunity to listen to their kids’ work. The activity I developed required that all students participate in a public online forum that would be displayed on a screen at the front of the classroom while listening to the recording of their concert. The tools used for this activity were 1) the SmartMusic digital recorder and 2) the browser available on the students’ smartphones to access the online sharing wall found at www.padlet.com. Those students who did not have a smartphone could use the teacher’s computer.

I recorded the concert using the SmartMusic digital recorder and then played it back for the students to listen to the next day. While they were listening, students were asked to follow their individual parts and take notes about what they heard. Then students were to post their comments on www.padlet.com, an online wall that was displayed on the screen at the front of the room. The   activity would engage the students in listening to their pre-contest performance while providing insight into the work that remained ahead. The requirements were:

The first thing that happened when I announced that was the activity of the day, was that the students got excited to be able to use their cellphones in class! Everyone pulled their device, went to their browser and pulled the pre-defined wall I had created at www.padlet.com

With this format, even those students who didn’t feel like speaking up, had their opinions heard, as they could still participate by typing their impressions, thoughts and analysis of the performance. Each student could see the comments that their peers had made not only on their own device as they were typing, but also on the big screen, where I was projecting the padlet wall.

Once everyone was done listening to the recording and posting their comments, we read them aloud and solicited additional information from students when their comments needed clarification. At the very end, I exported all the comments as a PDF and emailed them to my students and their parents, asking the students to use the comments as guidance for practicing for the contest. All their pieces were in the SmartMusic library and now they not only had my feedback and their own comments, but also those of their peers. That was great collaboration! 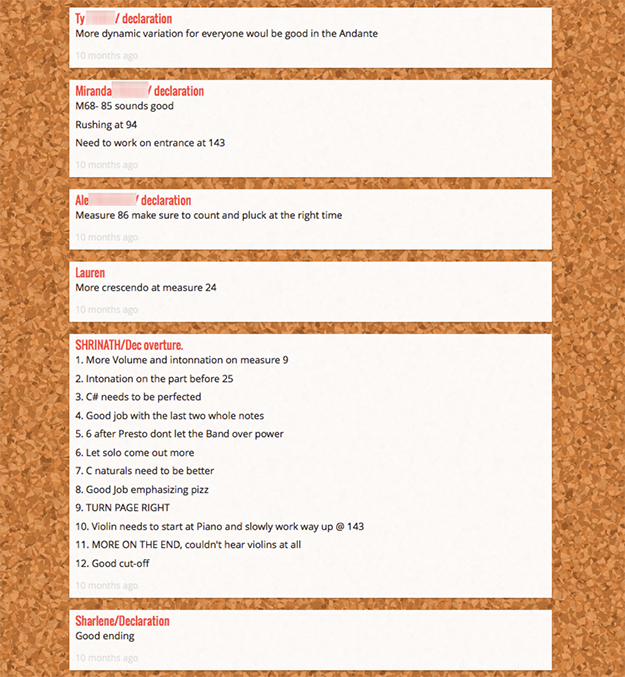 After listening to a performance, students can post their comments via the Padlet app.

This activity could be taken one step further by using Response Assignments within the SmartMusic gradebook. The teacher could attach the PDF that was created with everyone’s comments and ask the students via a Response Assignment to 1) synthesize the information and create a document that contained the top three issues in each piece 2) develop a plan for addressing those issues as a group and 3) develop a plan to address the issues individually. The students would then attach a document with the answers to the response assignment. Though a little time intensive, this activity would deepen the knowledge and critical thinking skills of the students as well as give ownership of the process of improvement.

With this activity, not only did the students work on their critical listening and thinking skills, but also on collaboration, a very coveted skill for 21st century learners. The activity also addresses the Creating, Responding and Connecting strands of the National Core Art Music Standards as well as state-specific standards, not only in music, but also in the use of technology in education.

I hope this article inspires you to use technology in new and creative ways in your orchestra classroom. 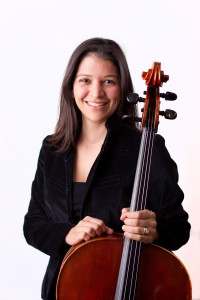 Giovanna Cruz is a cellist and educator with extensive experience as an orchestral and chamber musician, college and private studio teacher, and public school teacher. Giovanna spent the last six years as Orchestra Director at James Bowie High School, in the Austin Independent School District, where she taught more than 120 annually in four orchestras. Her varsity group earned sweepstakes at UIL Concert and Sight-Reading contest in 2009, 2010, 2011, 2012 and 2014 and performed in festivals across the country, namely in Corpus Christi and Richmond, VA. Her other groups earned excellent ratings at the same competitions. Giovanna holds the degrees of Bachelor of Education from the Universidad Metropolitana in Caracas, Venezuela, and Master and Doctor of Musical Arts in cello performance from the University of Iowa. She currently works as education services specialist at MakeMusic Inc., the manufacturer of Finale, and SmartMusic software.