In the past few months, we’ve started up an informal singing club here at MakeMusic. As I’ve led rehearsals, I’ve been reminded that few pronunciation issues give choral directors more headaches than the dreaded diphthong. Trying to get an entire ensemble of unique voices to perform complex vowel sounds uniformly can test the mettle of even the most seasoned director.

Why is vowel uniformity so important? Besides the fact that intonation and overall intelligibility rely on matching vowel sounds, uniformity is crucial to producing the kind of blend that results in a truly beautiful choral tone. In short, singing the same vowels together makes the difference between an okay choir and a stunning choir!

For many speakers of North American English, this perennial problem is simply one of awareness: we tend to think of most diphthongs as single sounds. A diphthong is a vowel sound that is perceived as a single sound, but is actually composed of two different sounds. If you say the word now out loud, the vowel sound represented by ow sounds like a single vowel. But stretch it out by saying the word very slowly, and you’ll see that there are actually two sounds, “ah” followed by “oo”.

Fortunately, the International Phonetic Alphabet (IPA) gives us a clue toward the true nature of these vowel combinations. Take, for example, the word light, a not-uncommonly encountered word in choral music. At first glance, there’s a single vowel, i. Say the word out loud, and it certainly seems that way.

But when it comes to singing the word on a sustained note, it becomes evident that there is more than one shape made by the mouth when pronouncing the i. In IPA, the i vowel sound is written [aɪ], or roughly “ah-ih”. In fact, there are six commonly encountered diphthong combinations:

*Probably the least obvious of these is [oʊ], but if you slow things down enough, you’ll notice that Americans tend to pronounce o by slightly closing the lips at the very end of the vowel sound. For an easy-to-use chart with audio samples, visit http://www.yorku.ca/earmstro/ipa/diphthongs.html.

In almost every case, the accepted choral practice is to sustain the primary vowel in the diphthong and tack on the secondary vowel at the very end. So in our light example, the vowel sound on the sustained note is [a], with [ɪ] coming immediately before the final t. An inexperienced singer might let the diphthong smoothly glide from one vowel sound to the other, but this should be avoided in favor of a quick switch at the end. The only diphthong where this isn’t the case is [ju]: here, the initial [j] vowel should come just before the beat, not unlike beginning consonants (think the gl of gloria), and the [u] should be sustained as the primary vowel. The same is true for syllables beginning with a w.

Things get even more fun when you introduce rhotic vowels, giving us the formidable triphthongs [aʊɚ] “ah-oo-er” (our) and [aɪɚ] “ah-ih-er” (fire). With these two combinations, it’s particularly important to stress with your choir not to split the vowels between pitches if the syllable happens on a melismatic passage.

To me, the question is: How do you get your whole choir to actually perform these sounds uniformly?

[Side note: ironically, choir is a rare case of a quadthong, where a single syllable has four consecutive vowel sounds! Just imagine how many choir directors have been driven to madness trying to get everyone to sing the same sound on the final note of The Holly and the Ivy.]

Try the following exercise as a warm-up. Have the choir sing a phrase that has words containing the same diphthong (such as the old chestnut “How now, brown cow”). As you conduct, signal that the choir should hold one of these syllables on a sustained pitch, and make sure everyone is singing the primary vowel for the entire length of the pitch.

You can even make it a game by only holding particular syllables unexpectedly: the choir will enjoy the challenge of watching your conducting while also remembering which vowel sound to sustain. Of course, be sure to prepare the end of the syllable in your gesture so they know when to pronounce the secondary vowel. Try this exercise with different diphthongs until this kind of pronunciation becomes second-nature.

Do you have another method that works in your choir? Please share it with us in the comments below. 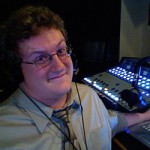 Jon Tschiggfrie writes, designs, and maintains MakeMusic’s documentation and help resources. A MakeMusician since 2011, a large portion of his time is spent improving the Finale User Manual so that users can find the answers they need quickly and easily. Outside the office, Jon lends his tenor voice where needed and writes primarily sacred and secular choral music (with a piano rag from time to time). His main area of musical interest is in documenting and preserving the American steam calliope tradition.