The ii-V7-I progression is the foundation of tonal Western music, and famous jazz musicians agree that learning harmony is crucial for developing improvisation skills. How do we teach students about this important harmonic pattern? Most of the time, we let students pick it up through osmosis, showing them that the seventh scale degree naturally resolves up to the tonic, how to tune thirds to better create triads, and why key signatures matter.

This approach works! Getting into the weeds of music theory is tough for high schoolers, let alone middle schoolers, so it’s easy to see why teachers at all levels get nervous about teaching it. Eventually, students who want to focus on jazz – or even enter jazz competitions – spend the extra time necessary to make the jump from these basic musical relationships to the progression that defines jazz standards.

How we deal with this jump can help get more students off to a good start with improvisation. The good news: there are ways to tweak the things we already teach students in order to help them understand ii-V7-I progressions.

We all teach scales. They build technique, rhythmic precision, intonation skills, range, and much more. In fact, these are usually how we get students over the hump and playing “with the changes.” We correlate a dorian scale to a minor chord, a mixolydian scale to a dominant chord, and a major (ionian) scale to the major seventh chord. Students scratch their head at our sudden use of Greek, but ultimately memorize some scalar formulas.

What we don’t do is explain why the progression works. Western tonal harmony is built around a single pitch (the key center). Subdominant and dominant chords sound the way they do because of the way they interact with a tonic pitch. When we reduce those relationships to “just keep playing the same scale” we discourage students from drawing three important conclusions with their ears:

The chords of even this simple progression are connected! There are guide-tone lines that we should illustrate for students, rather than insisting that “You can play scale X over all of that.”

Here are some examples: 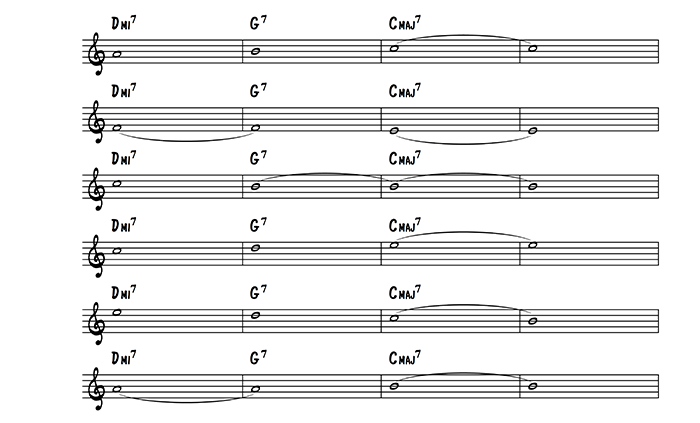 Each note of the tonic scale has different functions based on the progression. For example, the second scale degree moves from being the root (strong, boring) to the 5th (still strong and boring) to the 9th (not as strong, very interesting!).

The seventh scale degree moves from being the 13th (not strong at all, but hugely colorful and mode-defining) to the 3rd (very strong, still interesting) to the 7th (strong, still interesting). Students can practice these over a drone in order to better hear the ways that intervals relate to each other and practice hearing and identifying which chord member a given pitch is.

Not all harmonies fit nicely into our ii-V7-I world. For example, George Gershwin routinely started compositions on II7 to generate excitement and fit his melodies. Both “But Not For Me” and “Our Love Is Here To Stay” start with a G7 chord even though they are in F major. I’ve had student after student say “This song is in C!” and get excited, only to slam on a B natural over the G minor chord in the very next measure – obviously not the sound either of us wanted.

The Circle of 5ths

How do we get kids away from reducing their ii-V7-I progressions to a single scale where all pitches are created equal? Use the Circle of 5ths. Alongside scales, this might be the most-used tool for teaching theory. Treating it as an ear training exercise is even more productive. You can use call and response exercises and be sure to use intervallic exercises that help internalize the sound of the Circle of 5ths.

Better yet, use play-along recordings that have Circle of 5ths exercises included. You can make your own using Band-in-a-Box, or use prerecorded ones from Jamey Aebersold recordings or from the exercises in SmartMusic. Including harmony behind the soloist means that students will more quickly grasp all three of the important conclusions I discussed earlier.

Let’s take a look at a typical Circle of 5ths exercise:

The exercises both tonicizes the original key and forces the student to move in time to a new key center a fourth (or fifth) away. Students hear (over and over) what the ii-V7-I progression sounds like while also getting to practice playing over it. However, they also have to be prepared to move to a new key center, helping solidify the way progressions work together in a piece. This exercise mimics the movement that sometimes occurs in jazz standards – in this case the bridge of rhythm changes.

I’m not suggesting that we abandon the technique of teaching students to recognize key centers and play the tonic scale over a ii-V progression. That approach has worked for a long time and gets students started using things they’ve already learned. But we can help them develop a larger jazz vocabulary and strengthen their ears at the same time by working not only on scales, but on the Circle of 5ths as well. 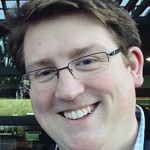 As MakeMusic’s social media manager, Ryan Sargent practices improvising 140 characters at a time. He has nearly 20 years of experience playing over ii-Vs, but prefers modal progressions because of their simple chord-scale correlations.

In addition to his role at MakeMusic, Ryan is an active jazz and funk trombone player in the Denver area and a member of the music faculty at the Metropolitan State University of Denver.