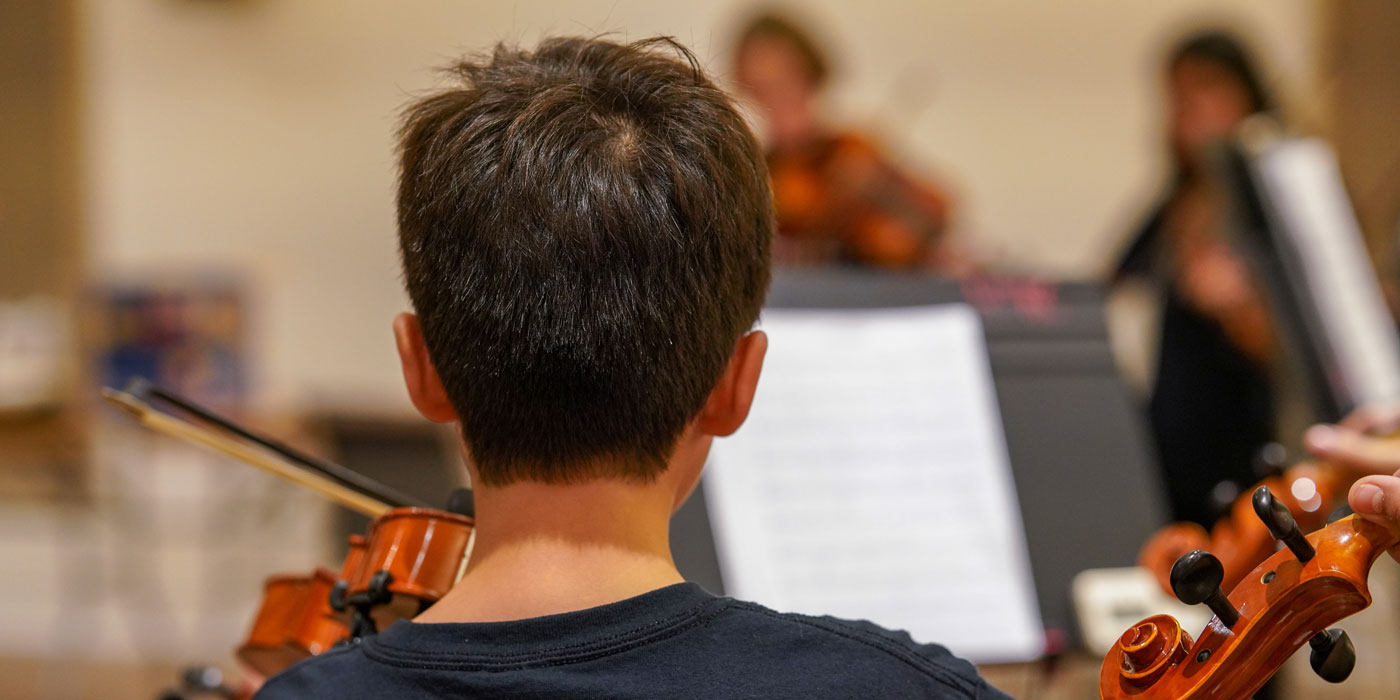 True music literacy extends beyond symbol recognition to actually being able to internally conceptualize the sounds that the symbols represent. This “sound before sight before symbol” concept is far from unique to music learning theory. Pestalozzi, Mason, and Kodaly all recommended and utilized this approach to training the ear before the eye.

While elementary general music teachers tend to be more faithful to this sequence in their pedagogy, many secondary ensemble directors often abandon it for an increased focus on repertoire preparation, hoping that the literacy groundwork laid in the elementary years is sufficient. Many times this is not the case, and directors become frustrated with the limitations of their ensemble members’ literacy skills.

Audiation, a term coined by Dr. Edwin Gordon (2012), is central to musical literacy. It helps us to process, recognize, reproduce, and apply music content both as we listen to music, as well as after the performance is over. This concept is not new – Kodaly’s term was “inner hearing” – and it describes our internal concept of music. The more music we hear, the more our music vocabulary of tonal and rhythmic content (as well as aesthetic elements like tempo, dynamics, instrumentation, and style) expands. The more expansive our vocabulary, the more musically literate we are.

Notational audiation/literacy (Gordon 2012) is only possible when one has an established aural/oral vocabulary from which to draw. This established vocabulary also allows students access to more advanced music skills such as improvisation and composition as a natural extension of the literacy process.

The extensive body of research of Dr. Gordon and his students (known as “Music Learning Theory”) asserts that we learn music according to the same sequence that we become literate in any other language or mode of understanding.

We acquire an aural/oral vocabulary that is demonstrated through speaking/singing. First, we are only imitating others, but by the “think/audiation” stage, we have assimilated enough content to begin to formulate – and use – our own thoughts and ideas based on that vocabulary. This is improvisation, the language equivalent of conversation. Once the material is familiar, it is easy to associate it with its symbols (reading), as well as writing (composition).

It is generally held in education that the teaching and learning process is most effective and engaging when it is sequential and aligns with students’ most natural modes of understanding. If this is true, we are currently teaching music literacy backwards by starting with the reading stage of the process. To expect a musician to decode the melodic and rhythmic content of musical notation without having a foundational aural/oral musical vocabulary is just as unreasonable as expecting a child to read if they haven’t yet acquired any language skills. No wonder our sight-reading efforts are so painful!

However, if we approach teaching literacy in such a way that we follow this universal, natural learning sequence, our instruction would become more efficient and effective, the content would be more memorable, and the skills our musicians would acquire would be transferable to the next sight-reading example, the next audition, the next concert. Can you imagine the time you could save in rehearsal by having more musically independent ensemble members?

Getting There: Strategies & Sequence

Note that in the first three steps of this process, one experiences music aurally and orally by rote before any visual associations (notation) are introduced. As learners are hearing, singing, and assimilating musical examples from various tonalities, meters, and styles, they begin to build a musical vocabulary. As the different elements of the music are given their names, verbal associations are made that are specific to the musical qualities themselves – major tonality, minor tonality, melody, harmony, duple meter, triple meter, etc. This gives the director the ability to introduce music theory terms early and make them a part of the regular rehearsal conversation. By engaging in daily warm-ups that give the students repeated experience with these elements,  the aural/oral vocabulary is solidified and there is a strong association with the concepts.

NOTE: While my applications are choral, they are equally applicable – as prescribed –  to instrumentalists. Singing is one of the best things your instrumentalists can do to enhance their musicianship, intonation, balance, blend, and overall literacy skills. While you may experience some pushback at first, you and your students will find it’s worth the effort to normalize singing in your rehearsals when you experience the results!

Pattern instruction is very effective as it reveals relationships between pitches, not just individual pitches in isolation. Especially in western music, certain patterns are the building blocks of melody and harmony, so if students have a vocabulary that centers around those elements, it is very efficient and transferable. This saves a lot of time when learning new music!

I teach my choirs major and minor scales with solfege syllables (movable do, la-based minor) and a set of eight patterns that center around the major and minor tonic triads, because these form the most recurring tonal material in the music we learn. It is truly helpful to have students equally proficient in both major and minor – and it doesn’t take much extra time! – so I always juxtapose the two tonalities.

Each day, the students echo these patterns until they have the order memorized. When they can recite the sequence of all eight patterns in both tonalities, I know they have fully assimilated the tonal content. This is the “listen” and “sing” stage.

At the “think/audiate” stage, students have fully assimilated this content enough to devise musical responses of their own based on those patterns. You’ll assess this with a simple improvisation exercise: If they can “answer” your tonal pattern back with one of their own, or use solfeggio to decode the patterns when heard out of context / familiar order, they are successfully drawing from their aural/oral vocabulary. If they are unable to do this, continue echo patterns until they are fully assimilated both in familiar and unfamiliar order. The same process holds true for rhythmic patterns.

NOTE: The first three stages take the longest to establish (based on how often your class meets), but taking the time to lay the foundation is well worth it! Once it is there, students move very quickly through improvising, reading, writing, and even composition.

The first attempts at reading should center around the content that your students have already assimilated. Remember, “sound before sight before theory.” (Bluestine 2000) Prepare their ears first for what the eyes will eventually see.

Begin with the familiar echo patterns notated and numbered. Have students read the patterns in the familiar order in which they were learned, then out of order to assess whether or not they are reading or merely reciting:

When students are successful at reading these patterns both in familiar and unfamiliar order (in both major and minor tonalities), it is time to move on to melodic material. This can be taken from warm-up books, octavos you’re working on, or your own compositions – the key is that the content center around the tonal vocabulary they have acquired.

Prepare the students’ ability to recognize pitches and patterns by having them echo short melodies that are similar to what they will read, in the same key. When they are ready to read a melody from notation, analyze the score by asking them questions that help to orient them in the music and recall their aural/oral vocabulary:

Once the students realize how much of the material is familiar to them, their reading attempts are far more confident and successful.

There is so much depth to this material and the applications are endless! When students have mastered each step of the learning sequence with tonic triad patterns, we move to tonic and dominant patterns (taken from the Jump Right In instrumental series). These patterns give me a lot of material to work with as we isolate certain elements to master: melodies in unison, part-singing, harmonic elements/chord building, and more!

These applications should not take much rehearsal time, especially after students have assimilated the rhythmic and tonal patterns. Plan to spend about 5-10 minutes on vocabulary building and application, so you have plenty of time left for repertoire preparation. When engaged in the process of preparing repertoire, take every opportunity to reinforce students’ music vocabulary by highlighting these familiar patterns wherever they appear in the music.

A holistic rehearsal plan that includes body and breath warm ups, ear-training via pattern instruction, sight-reading, and repertoire preparation is well worth the time spent as it yields significant growth in individual and ensemble skills and performance. As the adage goes, “It takes time to save time,” and this is certainly true when investing in literacy skills and students’ music vocabulary. Trust that it will pay off time and again, both for you and your students. 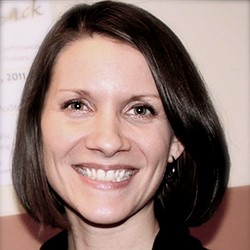 Amy Beresik (M.M.) is the choral director at Dorseyville Middle School in the Fox Chapel Area School District, where she has three grade-level ensembles and two award-winning honor choirs. She also serves as adjunct professor of music education at Duquesne University where she teaches the Vocal/Choral Methods I course. Mrs. Beresik has served as a guest conductor and clinician for music education methods classes and professional development sessions, as well as PMEA, ACDA-PA, ACDA Eastern Division, ACDA Voices United, NAfME Eastern Division conferences, and the GIML 5th International Conference on Music Learning Theory. She is a member of ACDA, PMEA, NAfME, and GIML.