It’s your worst nightmare come to life: a big truck races toward your marching band. It’s all part of the job for Brian Timmons, director of bands at Bergenfield High School in Bergenfield, NJ.

Last March I blogged about the Bergenfield band’s appearance on the Today Show, and at that time Brian mentioned that that they’d also recently participated in some scenes for “Tower Heist,” an upcoming film starring Ben Stiller and Eddie Murphy. On the heels of its November 4th release, I thought I’d share the YouTube video featuring a few different angles of the band’s action scene, just to raise the blood pressure of marching band directors everywhere.

These scenes were shot on two chilly days in December 2010, with the Bergenfield High School Marching Band performing as the Macy’s Great American Marching Band. You can also catch some even more exciting (albeit shorter) glimpses of the band in action in the official trailers.

Brian was kind enough to offer some details of the experience:

“We received the uniforms from Macy’s the day after their Thanksgiving Parade. Beginning Monday, we had two professional costumers and a seamstress at the school for a week, fitting all of the students in uniforms during their band rehearsal period. We also had a casting associate on site to process all of the film permit paperwork. By Friday afternoon the uniforms were tailored and on their way to Manhattan. Miraculously, it all fell into place in time for a 5:00 A.M. call time on Saturday morning.

The students met at the school early in the morning on both Saturday and Sunday and were brought into NYC on buses. The band’s holding area was at a private school near Lincoln Center, a few blocks from the set. There, they relaxed and worked on schoolwork while waiting to be called to the set. They also were fed very well from craft services.

When we arrived on the set, the director explained the scene to me. He explained that it was an action/chase scene, which I already knew. I wrongly assumed, however, that it would be Ben Stiller or Eddie Murphy running through the band on foot, chased by an FBI agent. Instead, it was a vehicle chase, with a box truck being pursued by an unmarked FBI car! Fortunately, just as I panicked for the safety of our students, a crew of stunt people came on the set dressed in the same uniforms and carrying rag-tag instruments. Throughout the shooting, it was always the stunt actors near the vehicles—our students were safely out of harm’s way.

Just this week, our Friends of Music organization rented out our local theater so that the students could see themselves on the big screen.

This was a once-in-a-lifetime experience for our kids (actually twice for me and a few older kids, since we also appeared in “Bounty Hunter” with Gerard Butler and Jennifer Aniston). The opportunity to experience the inner workings of a major motion picture film set was priceless. Now we just have to wait for the casting director to call for our next film!” 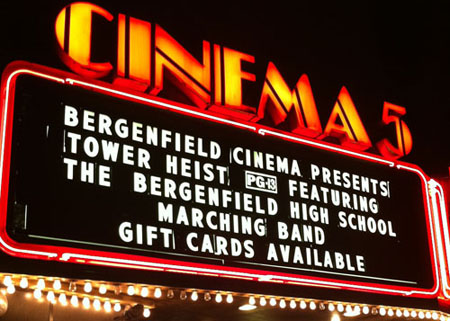 Had any near misses with your marching band, or care to discuss something more closely related to SmartMusic? Let us know by clicking on “Comments” below.