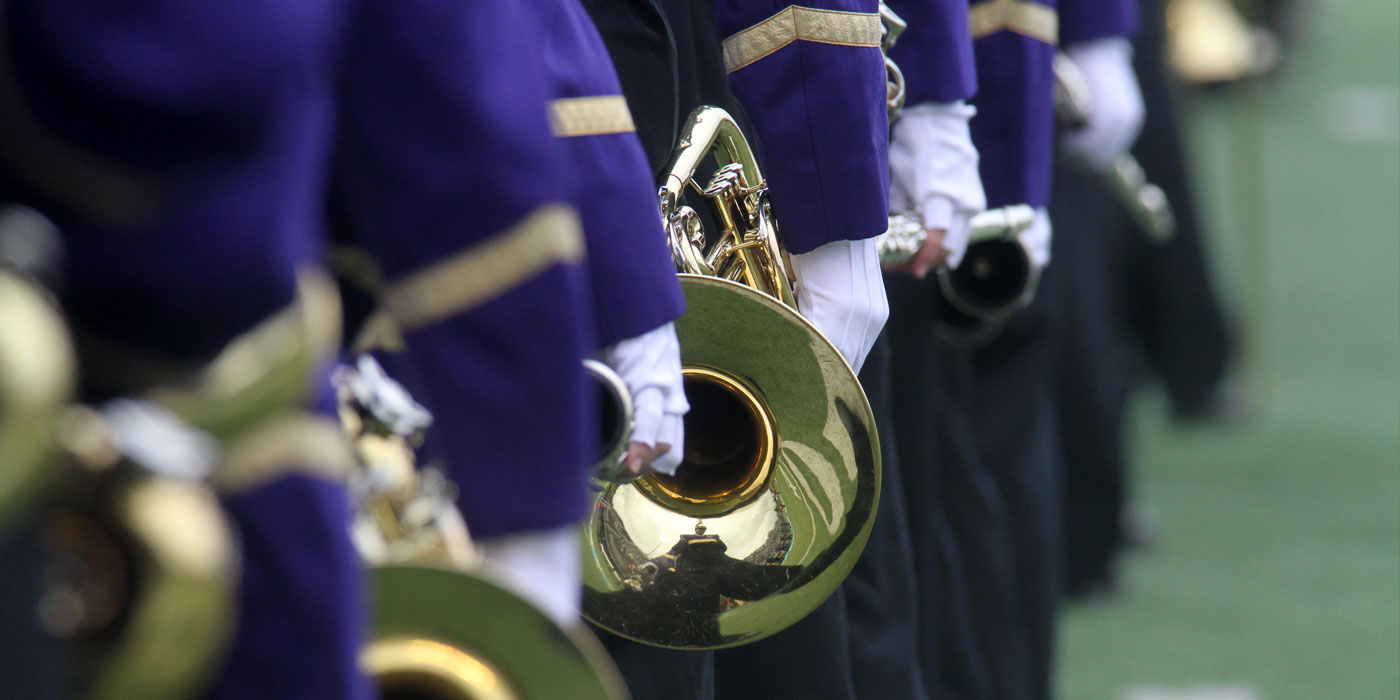 As the final preparations for the 2021 marching season are coming together, I’ve quickly remembered that the process of developing a show can be as frustrating as it is rewarding as we sift through and consider various show themes and music. For twenty years I’ve been fortunate to teach in both public schools with competitive marching programs as well as at the university level, and these are some of the ideas I bring into the design process each year.

The first is that we have to know our audience. We need to keep in mind for whom we are designing a halftime show, whether a football crowd, our individual communities, or a panel of adjudicators. Our reality is that it’s a mix of audiences that we have to consider. For instance, at the University of Michigan, we perform a different halftime show for each home game, which typically means seven or eight different shows each season. As we debate which show themes to include in our slate for each season, one of my first thoughts is, “Will something about this theme appeal to a majority of the 110,000 people in the audience?” That doesn’t mean that everyone will love every show (though we hope they do!) but it means that every show should have something that appeals broadly to the folks watching. I’ve included an example of that thought process and how it played out for our first show at the end of this article.

If you are programming for a competitive ensemble, then setting your band up for the best possible competitive success has to be one of your priorities. The panel of adjudicators assessing your show are a primary audience, so it’s important to read and understand the process by which your band’s performance will be evaluated. In Colorado, the Colorado Bandmasters Association sanctions a series of shows throughout the fall and their judges coordinator, W L Whaley, hosts judge training sessions each year. Many of the directors that attend those sessions aren’t hoping to become adjudicators so much as they are trying to understand the judge’s perspective so they can bring that knowledge to their design process. Similarly, when I directed the marching band at Colorado State University, W L worked with our music education students on how to design for effect. Understanding how to pace the various elements of a competitive show, along with the three components of general effect (intellectual, aesthetic, and emotional), is an essential aspect of selecting repertoire for a competitive ensemble.

If you don’t have access to those kinds of resources in your state, immerse yourself in great shows from the past, whether drum corps, marching band, or other pageantry programs. Great composers learn their craft by studying the music of other great composers and we can similarly dive into and understand how to design for our medium by critically engaging with great shows. Try creating a timeline and notice the frequency of musical or visual effects. Note that impactful shows ebb and flow, with effect moments occurring every 45 seconds or so. Try watching only the color guard and see how their staging and choreography can highlight soloists, reflect the melody, or elevate the overall feel of each musical piece. Listen without watching the visual program and notice who is playing – how often do the winds play tutti, in individual sections, or as soloists? How do the front ensemble and drumline compliment each other and the winds? Notice that in the great shows, there are a wide variety of timbres, sounds, and combinations of instruments. From these sorts of observations I’ve learned to ask myself the following questions:

Finally, our most important audience as music educators is our students. Our marching band programs are part of the music curriculum, so the music we select should nurture our students as musicians. After all, in many programs this six or eight minutes of music will be rehearsed for months and will see more performances than anything else we play, so this music should engage our students technically and musically. A student’s tone, articulation, rhythm, and facility can all be refined through well-chosen repertoire. The greater challenge is to find music that continues to also develop their skills of musical expression. This is, perhaps, an unpopular idea, but too much of the music we perform on the field relies on sound effects and disjunct, repetitive musical fragments that don’t offer our students the opportunity to understand the pacing of a musical phrase or how to effective lead a crescendo to its apex. I remember seeing many great marching performances at various venues to this point in my career and the common element in each is that the musical program stirred some emotion in me, whether through the tenderness of a delicate phrase ending or the thrill of a fff tutti statement.

Beyond our audience, I also keep in mind visual considerations. For our show type at the University of Michigan, I’m always thinking about what kind of iconography is present for that theme or musical selection. Our fans will only see the show live once in most cases, so making that musical-visual connection obvious and entertaining is critical. When designing for a competitive group I find that developing the musical and visual elements in tandem creates a more cohesive, unified program, as each of the elements influences the other through the design process. For instance, when the Michigan Marching Band performed a show based on “Mary Poppins,” in 2019, we referenced the dancing penguins, a memorable image from the original movie, in the sequence pictured below: 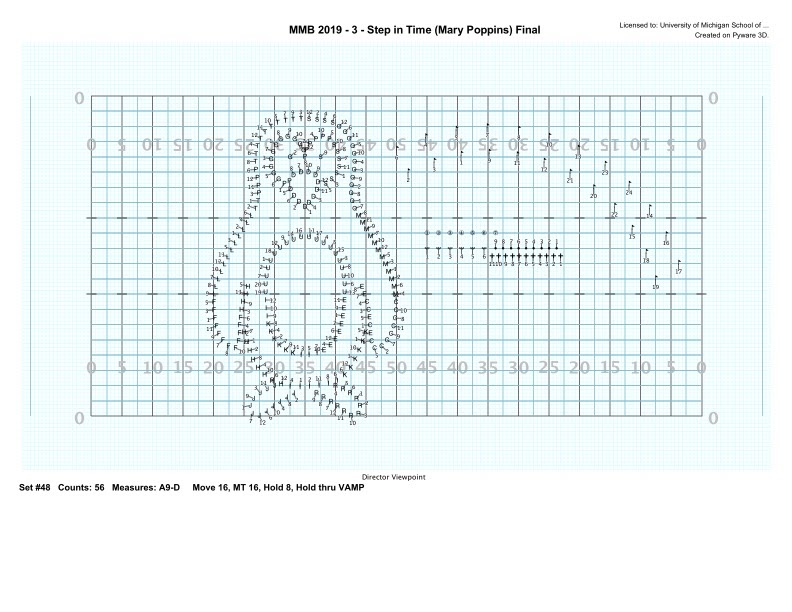 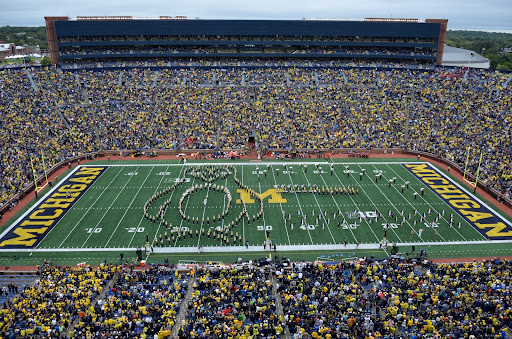 The tempo of each musical selection affects both the visual and musical success of the program. For the vast majority of groups, there is a sweet spot between 120 and 172 that is conducive to excellent technique, strong visual velocity, without impeding the musical performance. For less technically proficient marchers, I cap the top tempo at 156-160. Tempi that are too fast for the students’ technical level will create visual demand that takes away from the quality of both the visual and musical performance. On the other end of the spectrum, music with metronome markings in the quarter note = 80-96 range are too fast to double-time throughout, but are slow enough that they require a well-developed visual technique to perform with visual and musical excellence.

There are two final elements that are critical factors in our design process at the university. First, we are careful to ensure that we have permission to arrange and the right to stream performances of the music we select. This can be a tedious and expensive process, but it’s the law and the original artists and composers deserve our respect in that way. We also have an obligation to program music that is both musically diverse, in terms of styles and genres, and reflects the diversity of our communities more broadly. We believe that the representation of various demographic identities matters, so our design team works to reflect those diversities within the framework of each seven or eight game season. As an example, here are some of the selections from our first show for the 2021 season:

Balancing these many priorities can be challenging, but it is worth investing our time and creative energy. Our students’ experience, along with that of our band fans, parents, and communities are all served well by our efforts. By considering all of our audiences, nurturing the musician in our student musicians, and envisioning the visual program throughout the process, we can create an exciting, educational, and engaging program for our band. Best wishes to each of you for the upcoming season!

SmartMusic offers a wide variety of titles well suited for marching bands and pep bands. The SmartMusic Search app allows you to filter down to the marching band category, as well as filtering by genres such as folk, rock, and pop.

To explore available marching band titles, visit our Search app or visit SmartMusic.com to learn more about what tools we offer.

Dr. Richard Frey is a member of the conducting faculty at the University of Michigan, and the assistant director of bands. He is the associate director of the Michigan Marching and Athletic Bands, director of the Men’s Basketball Band, conductor of the Campus Bands, and guest conductor of the Symphony Band Chamber Winds. Frey was previously the associate director of Bands at Colorado State University in Fort Collins, Colorado. While he was there the CSU Marching Band expanded its national and international reputation, performing at the St. Patrick’s Festival Parade in Dublin, for Denver Broncos halftimes, and at bowl games around the country. In 2015, CSU hosted the College Band Directors National Association’s Athletic Band Symposium, the first non-Power Five conference school to do so.