John Cage’s 4’33” is now available in SmartMusic! This SmartMusic edition of Cage’s piece serves as an excellent introduction to this 20th century American icon and makes an excellent conversation starter on the topic of modern music.

4’33” is famously known as John Cage’s silent composition. All three movements are entirely comprised of blank measures. The composer, however, never saw the composition as silent. Writing in 1954, Cage stated, “The piece is not actually silent (there will never be silence until death comes which never comes); it is full of sound, but sounds which I did not think of beforehand, which I hear for the first time the same time others hear.”

Here is a performance of John Cage’s 4’33” from outside the MakeMusic headquarters in Eden Prairie, MN on 3/26:

At first glance, this may seem like an odd inclusion in SmartMusic’s repertoire catalogue. However, the focus of the piece is on listening to one’s surroundings and being aware of unintentional sounds occurring during a performance. Since a musical instrument can take years to master, students are often focused on issues involving technique and playing the right notes. In the process of learning to control an instrument, ideas about larger musical statements and musical aesthetics are sometimes lost. 4’33” is a piece that forces listeners and performers to confront these issues of musical aesthetics.

This piece can be part of a much larger conversation about music. What is music? What is the role of the performer in the music making process? Does the audience have a role in a musical statement? While the answers to these questions can widely vary, getting students to begin thinking about these issues is an important step in a musician’s journey.

To further the conversation about Cage and his views on music, the John Cage Trust website (http://johncage.org/) has many valuable resources, including a 4’33” app for iPhone and iPad. The 4’33” app features the ability to post and share versions of 4’33”. The app also includes a recording of 4’33” made in Cage’s last New York apartment.

We hope you enjoy the SmartMusic edition of 4’33”. To find the piece, simply search for John Cage in SmartMusic’s Find Music quick search. We have provided concert band, string orchestra and full orchestra versions of the work. The pre-authored assignment consists of the first movement of 4’33”.

And while it is not 4’33”, the following is a video clip of John Cage performing his Water Walk (1959) composition. The performance was taken from the 1960s television show. Seeing Cage perform one of his own works can provide a wealth of conversation topics and can be fun for students to watch.

Feel free to send us your recordings of John Cage’s 4’33”. If we receive enough submissions,  we will create a mash-up of the submissions. 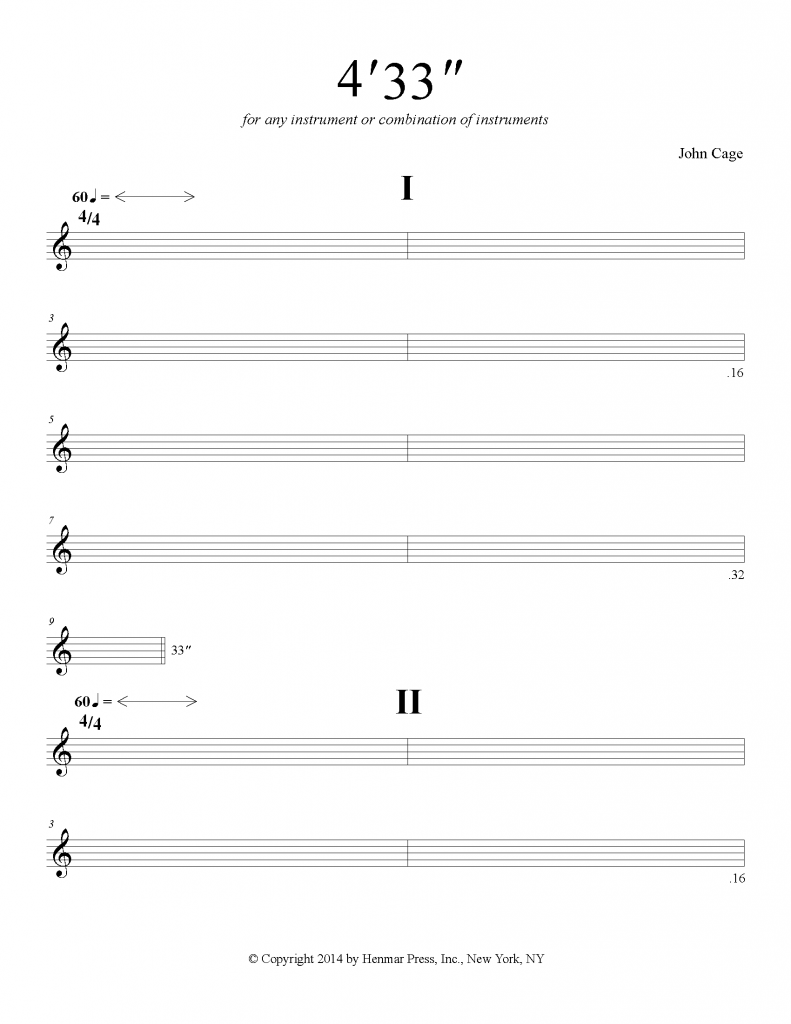