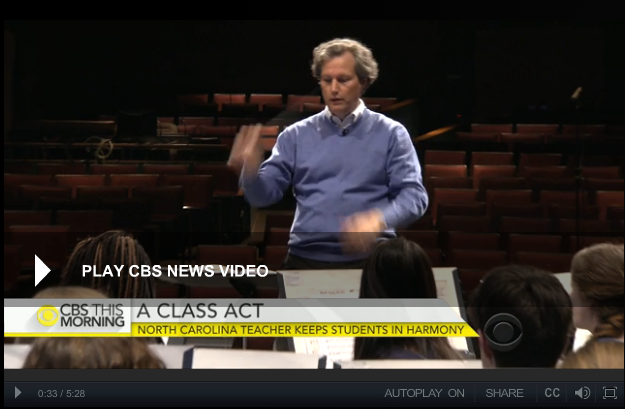 This week marks the third year that the Recording Academy and the GRAMMY Foundation have presented a GRAMMY Music Educator Award. The 2016 winner is Phillip Riggs, of the North Carolina School of Science and Mathematics in Durham. Check out the CBS feature for a glimpse of both Mr. Riggs as well as his school, a two-year, public residential high school.

Far from a GRAMMY “overnight sensation,” Riggs has taught band and choir in North Carolina for 27 years. Prior to joining NCSSM, he served as the first fine arts coordinator at Reagan High School, and was the first faculty member inducted in that school’s Hall of Fame. He has received the Exceptional Contribution in Outreach Award from the University of North Carolina Board of Governors for his work with music education. Riggs has served as chair and president of the North Carolina Band Directors Association, as chair of the North Carolina High School All-State Band for eight years, and as technology chair on the NCMEA board. He also remains an active clinician and adjudicator throughout the United States and China.

We’d like to congratulate Phillip, the other top ten finalists, as well as every nominated educator.

While at the GRAMMY celebration, Riggs indicated that for him, the “coolest thing about the whole story” was that he was nominated by a former student, Sarah Bean Stafford, herself now a middle school band director. In the CBS piece above, Ms. Stafford said; “He’s not just an inspiration, he taught us to be inspirations.”

Did a music educator inspire your career as well? Today is a great time to recognize them, too: nominations for the 2017 award are now open at GRAMMYMusicTeacher.com.