Perhaps no other instrument strikes fear into the hearts of music teachers everywhere than the bassoon. Just look at it! The left thumb has to play nine keys! How on earth do you put this thing together? I have to sit on a strap to play it? What on earth does my right pinky have to play?

Gentle readers, I am here to say that each and every one of you has the ability to successfully nurture beginning bassoon students in your ensembles. Starting bassoonists is fun, and it doesn’t have to be scary! Let’s begin!

The basic bassoon embouchure is actually very easy to form. A good way to have a new student experience it is to ask them to whistle. Even if they cannot make a sound, all of the elements will be there. When one whistles, the corners of the mouth are pulled towards the center of the face, and the shape of the mouth is either round or slightly oval. This is important, as the goal of the bassoon embouchure is to hold the reed with equal pressure from all sides of the mouth, as well as allow the reed to be at its maximum opening which is ideal for the majority of bassoon playing.

To prepare a bassoon reed, immerse the entire reed (not just the blades) in water, remove, and place on a surface for 1-2 minutes. After that, you are ready to go! This method is more effective than soaking the entire reed in water for several minutes, and actually prepares the reed for performance in a shorter period of time.

Once the reed is soaked, take the reed in your mouth so that the red part of the lips almost touch the top wire. Place the tongue on the tip of the reed, then, release the tongue letting air into the reed. If the reed is properly soaked and adjusted, a mix of three frequencies will occur producing a single pitch. Most of these single pitches range from an Eb to an F. These frequencies can be isolated by first blowing a slow air stream and then slowly increasing it. The longer that these three frequencies last with a fast air stream, the more balanced the reed is. When you produce a sound on the reed and get all three frequencies this is known as “crowing” the reed and is a very useful tool to having beginning bassoon students experience making sounds on the instrument.

Almost all embouchure issues are due to reeds that are poorly made/adjusted, which means that the facial muscles must compensate for any deficiencies in the reed. In most cases, this happens where bassoon reeds are too thick and/or the aperture is too open. If the student can only produce a high pitch on the bassoon reed, then either bassoon reed is too thick, or the embouchure is too linear in design.

Once the student can “crow” the reed have them sustain that sound for several seconds. After they can sustain the “crow,” have them move the reed back and forth in the mouth while still sustaining the crow. This requires a relaxed embouchure; when they succeed at this they will have a good sense of how relaxed they need to be.

Exercises on the Reed and Bocal

Insert the reed on the bocal and have the student make a sound. It will be some type of a “B” or “C” on top of the bass clef. Once they can perform that skill, have them move the reed and bocal back and forth as they did with the reed alone.

This is a wonderful opportunity to introduce articulation concepts on the bassoon without actually holding the instrument. For the vast majority of tonguing on the bassoon, articulation is done on the tip of the reed just behind the tip of the tongue. Having the student imagine that they are using “one taste bud on the reed” will enable them to develop a wide variety of articulation styles as well as being able to properly develop single tongue facility.

As the student grows comfortable articulating on the bassoon, be attentive to how they perform staccato/separated pitches. There will be a temptation to stop the reed with the tongue when playing short. The bassoon is capable of playing the shortest notes of any of the woodwind instruments, and composers have taken great advantage of that (think Sorcerer’s Apprentice). However, if the tongue is used to stop the air, the sound will be harsh, bright, and absent of any core to the pitch. Stopping the air with proper abdominal support produces a staccato that is full of resonance, but is still separated from its neighbors.

We are almost ready for the bassoon! When bassoonists perform in an ensemble, they perform seated which requires some type of accessory to assist them in holding the instrument. The two most popular choices are a seat strap and a neck strap. In order to hold the instrument properly, and allow their fingers to reach all of the keys, the seat strap should always be the first choice. When used properly, a seat strap takes almost all of the weight of the instrument off of the hands, allowing them to develop facility on the instrument as well as avoiding injury later on. A neck strap not only places the substantial weight of the bassoon in the left hand (where the left thumb must utilize nine keys), it also places stress on the neck and alters the angle by which the reed and bocal enters the embouchure.

There are many different type of seat straps on the market; some have hooks, some have cups, and some have a metal ring that goes around the bottom of the bassoon. My personal favorite is the cup design, as most are adjustable and prevent the instrument from moving. However, any seat strap design will work for all bassoonists.

To attach the bassoon to the seat strap, place the seat strap on the front quarter of the chair, and then sit with your hips as far back into the chair as possible. Your back should feel supported by the back of your chair, and it should feel as if the chair is supporting your entire weight. Attach the bassoon to the seat strap and bring it across your body, making half of an “X”. Carefully insert the bocal and then the reed. To find the proper height for the bassoon, look straight ahead and find the point where the bassoon reed touches the divot between your lower lip and chin. After you find that spot, slightly dip your head to meet the reed. You will be looking slightly downward at the instrument.

And now the fun begins! For a beginning sound on the bassoon, I suggest second space C in the bass clef. If this first pitch is flat, have the firm up their embouchure just a bit. Gradually introduce the pitches D, E, and open F. Slurring one note at a time, and then slowly expanding these intervals allows the students to gradually learn the spacing between each tone hole as well as get used to sealing an open tone hole with their fingers. Using the “fleshiest” part of the fingers is best to seal the tone holes as opposed to coming at the tone hole from a perpendicular angle or drifting towards the top joint of the fingers.

Your students now know a one octave major scale and are ready to embark on a great journey! 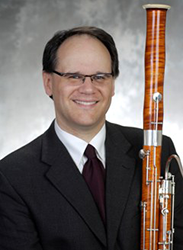 Dr. Jason Worzbyt is professor of bassoon and associate director of bands at Indiana University of Pennsylvania. He received an M. A. in wind conducting and a D.M.A. in bassoon performance from the University of North Texas.

Dr. Worzbyt has performed, recorded, and been featured as a soloist with wind ensembles and orchestras all across the country. As a guest conductor, Dr. Worzbyt has worked with elementary, junior high, senior high, and professional ensembles in Pennsylvania, New York, New Jersey, Maryland, Virginia, Indiana, and Kentucky.

He has also authored several study guides for the Teaching Music through Performance in Band, Middle School Band, and Beginning Band series published by GIA.