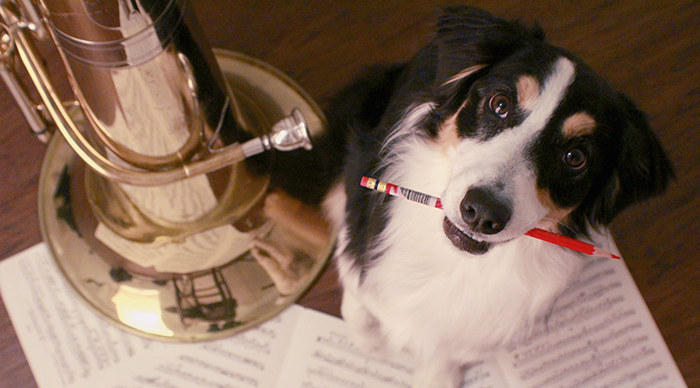 Sometimes it takes looking at something in a different way to truly understand it. More than a decade of private tuba lessons, symphony concerts, brass quintet rehearsals, and a music degree taught me a lot about music. But, surprisingly, it taught me less about learning than training two hyperactive Australian Shepherds did.

The Dog and Pony Show

When Cooper the Aussie joined our family in January of 2015, he knew “sit” and “shake.” Now he knows more than 50 different commands, can clean up his toys, and ride a skateboard. He also has a little brother, Pip, who’s not far behind.

In my never-ending effort to keep both dogs happy, entertained, and (most importantly) out of the trash, I work with them daily on everything from basic manners to ridiculous comedy routines.

Despite using positive reinforcement techniques (read: lots of treats) in all of our training, sometimes lessons just don’t go the way they’re planned.  Something as simple as “roll over” can go south fast when a dog isn’t comfortable on his back or just thinks you’re trying to play.

It’s easy to ask for the same thing over and over hoping for sudden comprehension, but that usually results in an exasperated trainer and a very confused and frustrated dog. Learner frustration is something most dog trainers deal with on occasion, but we try to avoid it wherever possible.

Once I started looking for solutions to learner frustration in my dogs, I started noticing something I wish I had practiced more in my own musical study: errorless learning. It’s an extraordinarily effective method of training in such tiny increments that the student simply can’t fail.

B.F. Skinner, American behaviorist and psychologist wrote, “Errors are not necessary for learning to occur. . . Errors are a function of poor analysis of behavior, a poorly designed shaping program, moving too fast from step to step in the program, and the lack of the prerequisite behavior necessary for success.”

Errorless learning changed the way I approached training. Instead of teaching Cooper to skateboard, I taught him commands like “paws” (front paws on the object), “perch” (all four paws on the object), and “back up.” He practiced different positions on mats, stools, and couch cushions before he ever saw wheels. Then, when the skateboard finally showed up, he hopped on like an old pro.

By focusing on small steps initially, we built the confidence and understanding necessary to succeed. But how can we make the same principle work in a music classroom?

You’ve probably seen a scenario like this before. A seventh grade french horn player repeatedly misses one rhythm during rehearsal. In an effort to fix that tricky measure once and for all, the director asks the horn section to play it on a loop. After a few rocky repeats, they’ve got it; the whole section plays the rhythm in perfect unison and the director continues forward with the band.

Here’s the problem, though: even though that student can now play along, he likely doesn’t understand that tricky rhythm any better than he did before. He simply imitated his peers. What happens the next time he encounters a similar phrase? The exact same thing: repeated failure until he can copy someone else. He lacks the confidence and/or the ability to learn new music on his own.

Insanity is doing the same thing over and over again and expecting different results. By that definition, this kind of practice isn’t just a waste of time; it’s insane. In attempting to eliminate symptoms of a problem through repetition, you cause small repeated failures and actively build bad musical habits.

There’s a better way to learn.

Identify the Root to Fix the Symptoms

Let’s consider what caused the problem to start. Likely, the horn player doesn’t understand the rhythm on the page or simply lacks the confidence to play it correctly. But maybe he doesn’t know how his triplets should sound against the trumpet section’s eighth notes. Perhaps he slowed down for an awkward interval or took too long a breath between quarter notes. What if he’s just cutting off air supply to hit the high notes and isn’t driving to the end of the phrase?

By identifying the root cause, we can work to fix isolated symptoms and improve musicianship as a whole. Instead of all that painstaking repetition, lead students in breathing exercises and show them how to clap polyrhythms with their neighbors. Practice slurs at varying intervals to keep them on their toes. Most importantly: don’t rush.

In the interest of time, educators often try to work students backwards to solve problem areas. They’ll rehearse the same two measure phrase on a loop. The student doesn’t get it. The educator slows it down. If that doesn’t work, they rehearse just the three most troublesome beats at an even slower tempo. Eventually the student will succeed. However, the student will have practiced failure 15 times before he succeeds even once.

We can set students up to succeed instead by isolating problem areas to identify what exactly needs work. Rather than working backwards, start with the very basics when students struggle. Turn on a metronome and lead them in clapping small pieces of the rhythm on the page slowly, focusing on the tiniest increments. When they are clapping correctly, gradually add more notes, then have them sing the phrase slowly. Then play slowly.

Though it may seem tedious at first, this allows students to actively practice success. And when problems do present themselves in the process, it’s infinitely easier to identify, isolate, and move forward, building the student’s fundamental skills along the way.

By practicing with purpose, you make it easy to succeed one piece at a time. It’s worth every effort when you’re leading confident students (or dogs) who truly love to learn.

MakeMusic’s conversion marketing manager, Kait Creamer works to share SmartMusic and Finale with musicians around the world.  She received her B.M. in music industry with a concentration in tuba from Middle Tennessee State University and currently plays in the Gunbarrel Brass Quintet.

After learning to work with herding dogs in New Zealand, she returned stateside to train two Australian Shepherds, Cooper and Pip, who can often be found doing tricks for popcorn at the MakeMusic office in Boulder, CO.