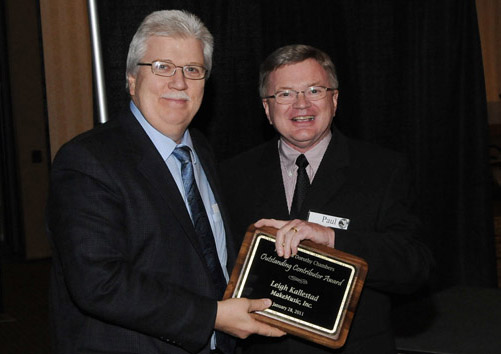 As a senior account manager at MakeMusic, Leigh Kallestad helps educators implement SmartMusic and Finale into their music programs. With 29 years of music education experience, Leigh’s expertise does not end with MakeMusic products, and countless teachers and students have benefitted from the resources and solutions Leigh has brought to their attention.

My first introduction to Leigh was though an email, which I noticed he signed as “Mr. Leigh Kallestad.” I assumed the “Mr.” was a holdover from his teacher days, or that he was the sort of guy who demanded respect and formality. I couldn’t have been more wrong: To save others from the embarrassment of mistakenly assuming “Leigh” was a woman’s name, Leigh simply used his signature as an opportunity to provide a proactive solution. As I began to know Leigh better I discovered he was always thinking about quiet ways he could help others.

Last month Leigh was in central Missouri for the Missouri MEA convention, where he gave SmartMusic clinics and answered questions in the MakeMusic booth. At this event his wife, Mavis, was also working on behalf of MakeMusic as a Finale clinician. Anyone who’s ever worked at any kind of convention knows that it can be rewarding, yet tiring work, and there’s always more to be done. On Friday night, after closing the show, Leigh and Mavis attended a dinner with friends and colleagues from Nottelmann Music, a big supporter of SmartMusic.

The same evening there was also an all-collegiate choir concert. Frankly, Leigh was considering not attending the performance after his busy day, but Mavis surprised him with news that their friend, music educator Janice Ragland (also a SmartMusic clinician) was going to be recognized at the concert. As Leigh would gladly climb tall buildings for any of his friends, he agreed to cut their dinner plans short to attend the concert and support their friend. So Leigh and Mavis raced to the venue and rushed in to get seats in the second row where they could get some good photos of Janice.

The presenter then began to describe an award that was to be given to recognize an individual, organization, or corporation that has contributed in an extraordinary manner to the support of music education in the State of Missouri. He went on to explain that this award is not automatically awarded each year, but only as extraordinary circumstances warranted it. As Leigh listened to the introduction he was first struck that it appeared a male educator was going to be recognized first (the presenter was saying “he” this and “he” that) and that this educator had a lot in common with Leigh, having gone to school in both North Dakota and Michigan.

Then it dawned on him that something was up!

On Saturday, Jan 29, 2011, Leigh Kallestad was presented with the Missouri Music Educator Association’s “Russell and Dorothy Chambers” Outstanding Contributor Award. He was the sole recipient. Presenter Paul Copenhaver said that four current and past presidents were part of the nomination process and Leigh was their unanimous choice.

In his thank you comments to the MMEA audience, Leigh said that “Missouri music educators exhibit the highest music standards, compassion for their music students, and respect for their colleagues,” and that working with them “has been a wonderful experience.”

Please join me in congratulating Leigh for his tireless efforts to support music educators in Missouri and beyond, and feel free to send him your best wishes by clicking on “Comments” below. I’d also like to congratulate Mavis and everyone who successfully conspired to make the award a complete surprise to Leigh!