When I taught high school, one of my formulas for success was to schedule our spring concert as late in the year as I could, often the Monday after Memorial Day. I would also program student favorites (pop and lighter music versus the classical music we studied the rest of the year). As a result, my choir students stayed focused to the very end of the year.

My strategy had to change when our high school adopted final exams on the last days of school. This required students to study for exams during the last week of school, leaving little time for concert preparation. Of course, the exam change was adopted over the summer, long after concert dates had been set in a performance space that was rented out a year in advance.

I still remember a phone call from a parent that year, asking why we didn’t hold our concert in early to mid-May like other schools in our area. This parent didn’t want to hear about how it was too late to change the schedule; they simply wanted a different date that didn’t impact their child’s studying time. When I defended the pedagogical value of late concerts, the parent replied: “Surely those other schools do something of value over the last month of school that you could do, too!”

After a little research, I discovered that most schools had one choir that performed a song at graduation, so at least that choir would keep singing through the end of the year. Some schools held auditions for next year’s choir, something our scheduling timeline did not allow (our schedules were always set by March). But it was very common to hear that many programs either offered study halls or a plethora of videos at the end of the year.

So, if you place your final concert in the beginning of May, how can you keep kids engaged and involved with no more performances to look forward to?

I would not suggest a series of lessons in music theory or sight singing. Your final concert is a check-out semaphore for your students. They know that there is nothing on the calendar until next year, and they are unlikely to desire to re-engage to a new level with paperwork after their final concert.

With that in mind, here are a few ideas to keep music students engaged through spring:

Spring is a great time to do summative individual assessment with students; make them prove – individually – that they can sing or play what they performed in the last concert.  It is best if you can remove yourself from the testing room, using software like SmartMusic or simply having students record themselves as part of the larger group with individual devices.

One app that works well for this is Showbie. Showbie records audio on any iOS device, so even if you don’t have iPads, students might have iPhones or iPod Touches they could use. In an assessment, target a specific area of a specific length, and then let students have several “takes” to submit their best work.

If you have a major concert in the fall, you could always try to start music for that concert over the last weeks of school. My district holds an annual masterworks concert featuring the combined choirs from all three high schools. A predecessor of mine would start learning notes for that concert in May. Of course, this requires extreme planning, knowing what you will perform months in advance of the next school year.

If your school has a computer lab, you could teach a short unit on composition and music notation software, using free resources such as Finale Notepad or MuseScore.

As a side project, you might want to contact the PDF Band Music Library, and ask them for an out-of-copyright work that needs to be re-scored. You could distribute parts to students and have them recreate those parts, eventually combining them into a full score. In this way, they could have a project-based-learning experience in music, doing something of service to the music world while learning the basics of music notation programs.

If you have iPads, you might want to examine composition projects using free apps such as NotateMe Now or Touch Notation Free which allow you to literally draw music notation.

If you have just about any device, Noteflight could always be used for composition projects. If you have a Mac lab or iPads, you could do a unit on GarageBand, teaching students the basics of digital audio workstations.

You could use the time to have students prepare solos or ensembles with pop music, using resources from SmartMusic or Chromatik. SmartMusic, of course, will help students learn the piece, and Chromatik will give students a wide variety of free music (including pop music) to study for many types of instruments and voices, with some rehearsal resources as well.

If you choose to have students prepare pop music, you could hold a “talent show” performance during class near the end of school to showcase those songs.

Video and Other Art Forms

You might want to have students use iMovie or another movie making app to create a promo video for your program, or to make an “intro to band/choir/orchestra”‘ video where they demonstrate the behavior expectations for your program. You might find that seniors are interested in leaving a legacy, either via a video or other means.

We had a place in my last school where seniors could literally leave their mark on the school. In my case, they painted blocks in a back storage room. This could be done any number of ways, including them to make a photo collage from their graduating class (featuring music events). This could also be done digitally.

Try to avoid a month of movies or study halls at the end of the year. Playing one movie (even over a few days) can be a reward, as can a party. With some very basic technology at your school (or in the pockets of your students), you can pursue some interesting projects at the end of the year that can make a difference long-term for your program and for music education.

What are some of your ideas for using technology to fill instructional time at the end of the year? 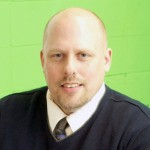 Christopher J. Russell, Ph.D, is a middle school choir teacher at Oltman Middle School in St. Paul Park, Minnesota, which is part of the South Washington County School District. He speaks across the country on the topic of technology in music education, is the author of a blog called techinmusiced.com, and has two books on the subject available on the iBookstore.