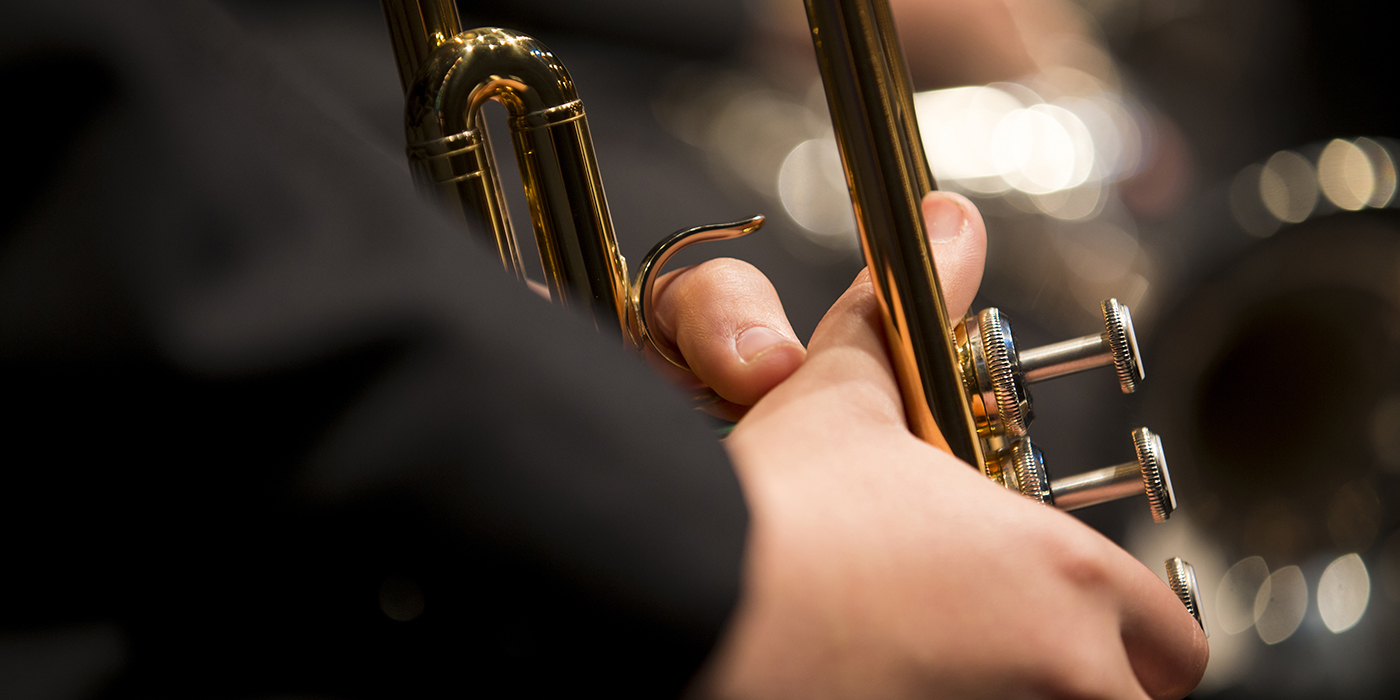 Tight rhythm and phrasing are hallmarks of any successful jazz ensemble. Singing is a great way to develop a collective sense of articulation and playing “in the pocket.” Singing through parts allows students to develop an aural sense of the music without the struggle of making it sound on their instrument. It is also a great way to drill passages without killing the chops.

Once students have an internal sense of how the music is supposed to sound, realizing it on the instruments becomes much easier.

But Ella Fitzgerald Isn’t In My Class

It is important to remember that this kind of rehearsal technique is focused on rhythm and articulation. While singing to match pitch has wonderful benefits, pitch matching is not the purpose of this kind of singing.

Students should not attempt to sing their parts at pitch (an extremely difficult task especially for inner parts) but should instead develop an inner sense of the sound, feel, and direction of the music.

Every note has a beginning, a middle, and an end. The attack is the beginning of the note. The middle is the sustain and the end is the release. Rhythm and phrasing is most defined by the attack and release of the note. Tight rhythm and phrasing are products of the ensemble playing attacks and releases consistently together. Full sounds and good intonation are the products of consistent sustain.

Reproducing instrumental phrasing with the voice requires the use of syllables. Syllable choices should mimic the articulation and phrasing desired, and should take into account the attack, sustain, and release of the notes. I like to use syllables that also encourage good use of the tongue and airstream so when players return to their instruments the transition is a little bit more seamless.

Syllables that begin with a “D” sound provide the most accurate representation for most attacks. Even though the “T” sound is often taught to beginners and may be more familiar to young players, I have found that this produces a very choppy and over-articulated feel – especially on passages with moving notes. A good firm “D” allows for both a solid attack as well as smooth connectivity between notes.

Sustain should be an open vowel sound. Just like at the doctor’s office, “AH” keeps the throat open but still relaxed and encourages the free movement of air. Combined with a “D” attack, the “DAH” syllable provides a clean start to the note with a full sustain.

The release of a note is just as important to the rhythmic feel as the attack. Jazz releases are often abrupt and tongued to fully realize the rhythmic intensity. While this kind of articulation is rarely used in the concert band (I can still recall my director telling me “Don’t stop the tone with the tongue!”), it is very much a part of jazz vernacular. For this kind of sound, the “D” is usually a little too soft. Stopping the air with at “T” sound provides the cleanest possible release.

Even if we understand how to play the beginning, middle, and end of notes, there is more to consider for a satisfying musical performance. Musical elements can be studied and dissected to extreme degrees. Think about the difference between p, pp, and ppp. That’s three degrees of soft! Sometimes, trying reach that level of detail can be overwhelming.

I prefer to keep things much simpler. Either a note is long or short, and accented or not accented. Using this rubric, we can create a series of syllables that can be used in most situations. 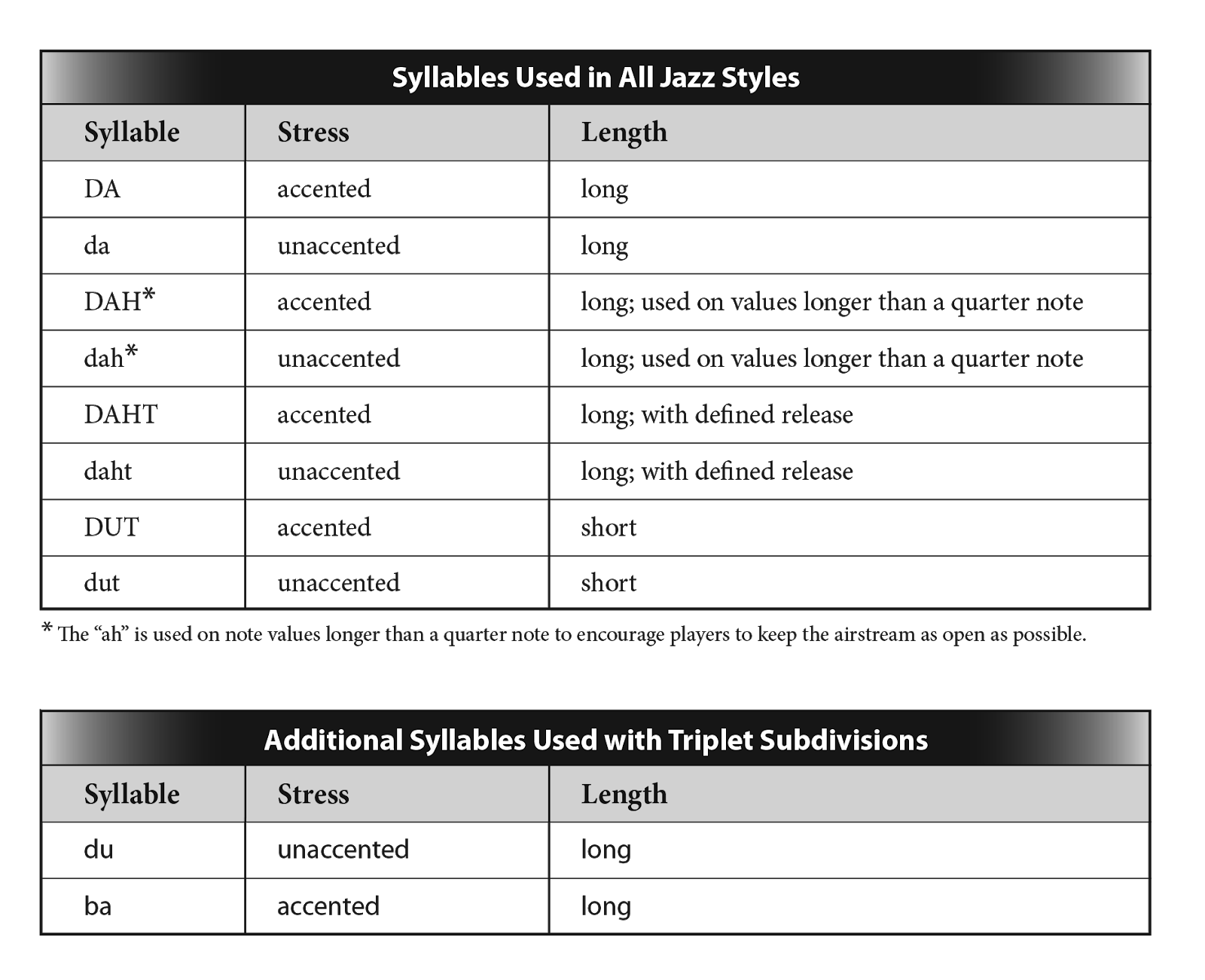 Most of these syllables speak for themselves (pardon the pun). I use ALL CAPS to indicate accent or emphasis. The “T” is used at the end of notes with a defined release. It is important to remember that all vowel sounds should be the open “AH” regardless of the vowels used to spell the syllables.

Short notes (dut and DUT) should still be considered shorter versions of “daht” and “DAHT.” I chose this spelling over “dat” as I did not want to encourage the more spread vowel sound that would rhyme with “cat.”

The other syllables in the table are used when playing triplet subdivisions—which most of the time means swing! Phrasing 4 eighth notes as “da-da-da-da” with a triplet subdivision creates a swing feel that is solely based on rhythm placement.

Swing is somewhat about that, but true swing feel comes more from the slightly different emphasis of each eighth note. Just sing “da-ba-du-da” and then “da-da-da-da” and you will hear precisely what I am talking about.

Try these out in your rehearsals. Encourage students to sing how they want to play. They may feel a little awkward at first, but that will pass the more that this becomes a part of the rehearsal fabric. Give it a try, and let me know how it goes! 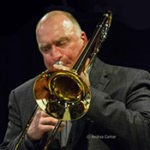 Dean Sorenson is associate professor and director of jazz studies at the University of Minnesota as well as a prolific and highly sought-after composer, arranger, trombonist, educator, and clinician. Dean’s latest project is Colors of the Soul, a CD of original music for sexet. His most recent book is First Place for Jazz, a new and innovative method for beginning jazz players published by the Neil A. Kjos Music Company. He is frequently featured at festivals and conventions around the country and abroad, and maintains a full schedule of concert and recording dates as a Yamaha performing artist. For more information please visit www.deansorensonmusic.com.