It is our experience that having students play in chamber ensembles regularly will give you stronger results for your entire program even though it may mean less large ensemble rehearsal time.

Think of it this way: imagine your band program as a corporation. Instead of micromanaging everything as the CEO, you need to delegate some, or even most of the work. Imagine your chamber ensembles as successful departments within your organization. Like all departments, their ultimate goal is to help the corporation meet its top-level objectives of increased student skills and more active musicians.

Developing a Sense of Ownership

Many educators wish that their students would take more ownership in their section and ensemble. When playing in chamber ensembles, students are forced to play with more confidence because they are all playing one-on-a-part. This means they make it happen, or it doesn’t happen at all. While this can be intimidating for some students at first, they will adapt to this new musical setting and grow from it. Back to the corporate analogy, instead of students just being worker bees at entry-level positions, you are promoting them to management. You are giving your students the keys to their own department, their own group. This is an empowering tool for any level of student as it puts them in the spotlight and gives them more potential for learning.

Did you ever think, “If I wasn’t here, this band would fall apart?” Well, the answer is yes…

Students are used to getting tempo and time from your conducting. Since they no longer have this luxury in a small ensemble, they will have to count for themselves. After experiencing music making without a conductor, they will probably appreciate your conducting more when they come back to the large ensemble! For better or worse, small ensembles can fall apart easily if every member does not count diligently. It will only take them a couple failed attempts at playing a piece before they realize the need to focus on counting in order to stay together.

Students will also be able to hear their rhythmic deficiencies easier in small ensembles because of the inherent thinner texture. Students often hide in section playing and it is very easy to “play along” with the band instead of counting independently. This new listening environment will be very beneficial to other skills as well.

Chamber ensembles require more rhythmic responsibility from all players but especially tubists, bassoons, and other “bass” instruments. These instruments are often not challenged daily in rehearsal and as a result often aren’t pushing themselves as much as they can. In chamber ensembles, they will experience how important their role is, even if it is not more difficult than their large ensemble parts. This increased responsibility will result in more engaged music making from your lower voices. In turn this will give your ensemble a boost that you might not have even realized you were missing.

Encourage students to record themselves and to listen. Do they slow down? Speed up? While this is a great rehearsal technique for any ensemble, it is especially important for chamber ensembles. Because there will only be one player on a part, students will actually hear their own rhythm deficiencies and hear where they are slowing and what rhythms or musical setting cause them to do so. Reviewing a recording of their ensemble is also a great way for students to become aware of other musical problems, including intonation, balance, articulations, phrasing, etc.

Chamber music is one of the best settings for students to learn to succeed as soloists.

Chamber ensemble playing has been described as 1/3 soloist, 1/3 accompanist, and 1/3 conductor. To many students, the soloist role might be most intimidating. While few students are natural soloists, chamber music is a wonderful way to introduce them to solo playing and get them more comfortable in the role.

In many chamber pieces, they may have the melody for 2-16 measures before the melody is passed to other players. This is manageable as they do not have to carry the whole piece, but are exposed for a short time. As they get comfortable, students will begin to look forward to their solos instead of dreading them. Also, there is usually a fair amount of call and response or simply repeating material between instruments, so they may have already heard how their solo goes or at least the style of it before it even gets to them. This is an opportunity for students to copy each other instead of worrying about coming up with a unique interpretation.

Chamber music also creates a great setting for developing soloists because students are listening to each other play melodies. They are all simultaneously figuring out this skill. The fact that all of them are dealing with the same issues will lead to improved teamwork and a more supportive environment. As they gain chamber music experience, students will be more likely to participate in solo and ensemble and will not be as intimidated by exposed parts in their large ensemble playing. Additionally, it is much easier to perform additional repetitions of solo material in a chamber rehearsal than it is to give a student a second pass at a solo in a full band rehearsal.

Every Student Becomes a Conductor

Since there is no one conducting a chamber group, the students will need to communicate with each other musically and non-musically. Since they will be trading melodies they will have to make musical lines seamless. They will have to become responsible for the musical product. Someone will have to cue or count in the rest of the players so they can start together. They will have to play non-melodic parts together by using eye contact.

All of these things will train them to start thinking beyond the notes on the page and focusing on creating a great musical product. The development of these newfound skills will unquestionably benefit your large ensemble as well.

The thinner, one-on-a-part texture of chamber ensembles also allow for more efficient blend and intonation exercises. With chorales or similar compositions, student chamber ensembles can practice building chords and get acquainted with the concept of lowering major thirds and raising minor thirds. Ideally, students will begin to recognize the “waves” in an out-of-tune partial, and correct automatically.

Chorales have relatively few accidentals and rarely change keys, so students can also practice intonation by playing them against a tuning drone on the root and fifth of the key. The drone will give a beginning chamber ensemble the opportunity to check the intonation of each note against an external and infallible source.

In a large ensemble, it is often difficult for students to hear their own individual sound against the rest of the group. In a chamber ensemble, the group sound is more transparent, and the concept of blend is easier to approach.

Student chamber ensembles can improve their blend (and their listening habits) with the following exercise, intended to teach an ensemble to blend at various dynamics:

As students learn to make this process automatic, their newfound listening skills will make a big difference when they come back to the large ensemble!

One of the greatest benefits of chamber ensembles is that they can help develop student leadership skills. Student leaders work to continually improve their performance skills, communicate musical concepts to others, and demonstrate the ability to shift from leadership to followership. In order to facilitate the development of student leaders, we need to create opportunities for them to lead, allow them to lead, and give them responsibility for success.

First, you must create opportunities for students to lead. In large ensembles, the conductor is the focus and generally leads the performers. In chamber music, players are given responsibility for their parts, the scheduling and running of rehearsals, and finally, the overall product. These opportunities are seldom found in large ensembles, where even running sectionals depends on the musical direction from the conductor.

Second, you must allow the students to lead. It is important to act as a counsel, not the director. It can be beneficial to establish ground rules, but you have to be willing to let the ensemble fail and then help them learn from the experience without taking over leadership of the group. Simple tasks like selecting music and setting up rehearsals are good ways to permit student leaders to demonstrate initiative. Leading rehearsals offers another opportunity for students to develop leadership skills, but it is important to remember that rehearsal strategies are a teachable subject. Cueing and musical decision making may be new concepts to students and areas where your counsel may be needed. In our brass quintet, if there are different musical opinions, we try each option and then vote with a majority rule.

Finally, give them responsibility for their success. You might offer suggestions or contacts for arranging performances, but let them handle the coordination and details. This is a great way to learn how to set up a gig: when to arrive, how to get there, what to perform, how to develop a set list, the importance of lighting the music and the stage, what to wear, etc. Giving students opportunities to succeed on their own will allow them to learn many vital life lessons through that process.

There are a variety of ways for chamber ensembles to be utilized. You can schedule a chamber music recital, chamber ensembles can perform before or during large ensemble concerts, or they can perform the National Anthem at school sporting events. Trustworthiness is the hallmark of a leader and it is important to remember that students can’t demonstrate trustworthiness unless they are first given trust, and the opportunity and tools to succeed. 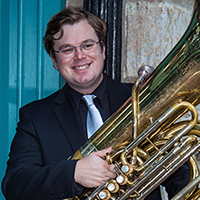 Paul Carlson has performed around the globe as a soloist and as a member of the internationally renowned Dallas Brass. Dr. Carlson has completed studies at the University of Illinois (B.M.), the University of New Mexico (M.M.), and the Indiana University Jacobs School of Music (D.M.). He has studied with Dan Perantoni, Richard White, Mark Moore, and Joseph Goble. Paul has performed with a number of symphony orchestras, brass quintets, and other groups. An active soloist, he has presented recitals at the last two International Tuba Euphonium Conferences. Paul also serves as assistant professor of tuba and euphonium at Grand Valley State University, and is a Buffet Crampon USA Artist performing on B&S, Meinl Weston, and Besson tubas. 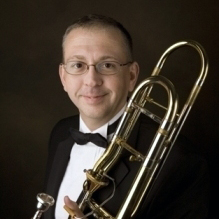 Mark R. Williams joined the faculty of Grand Valley State University in 2008. Previously, Dr. Williams served for 22+ years in the United States Air Force Band Program and achieved the rank of Chief Master Sergeant. As Principal Trombonist with the USAF Concert Band in Washington, D.C. for 14 years, he performed in all 50 states and throughout Europe and Asia. He was a featured soloist on numerous concert and national tours and was a guest soloist with the U.S. Army Band at the Eastern Trombone Workshop. Dr. Williams can be heard on more than 30 recordings with the United States Air Force Concert Band. Dr. Williams received the Bachelor of Music degree from Michigan State University under the tutelage of Curtis Olson. He received the Master of Music and Doctor of Musical Arts from The University of Texas at Austin, where he studied with Donald Knaub.