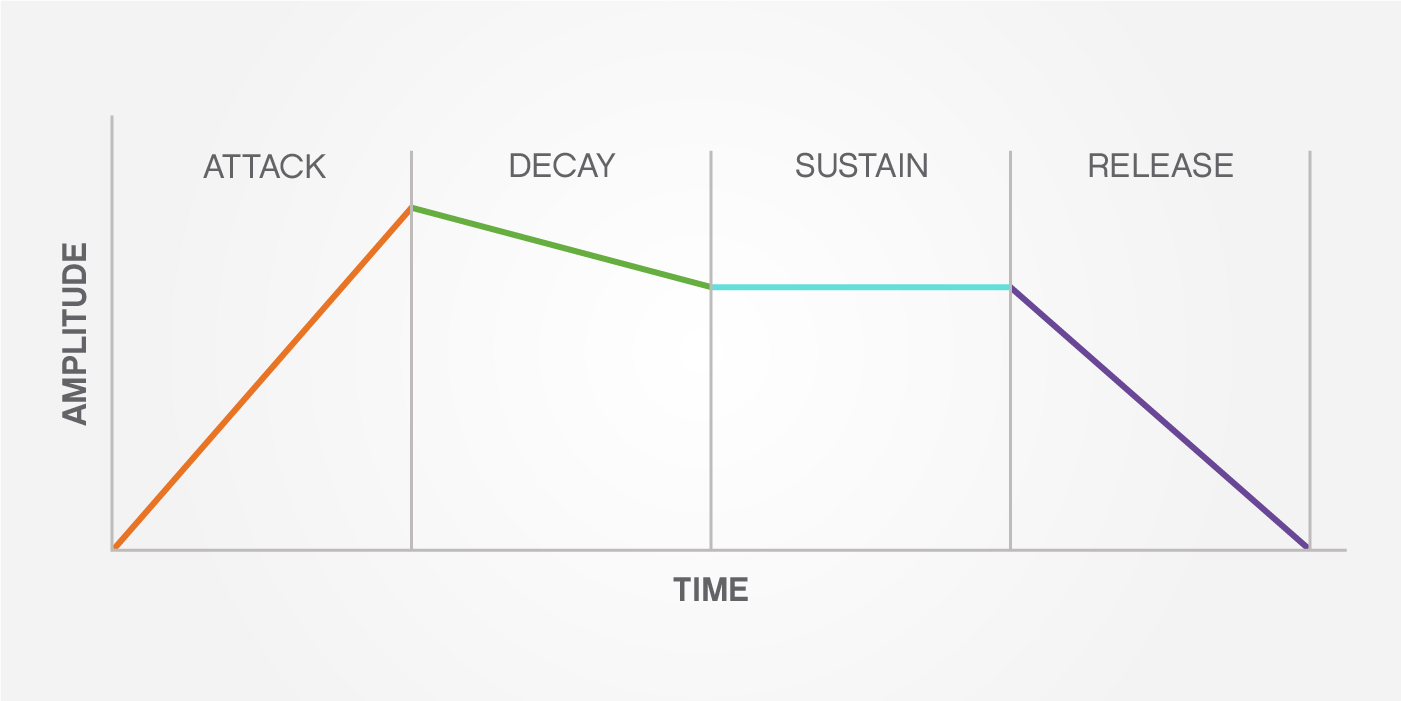 As a brass or woodwind performer, nothing is more important to your sound than complete control over your attacks. While it’s easy to make such a broad claim, I have some practical data to back it up, as well as some suggestions on how you can help your students improve their attacks.

As an undergraduate, I took an electronic music course. Because this occurred just after the Earth’s crust had cooled, we spent a lot of time with analog synthesis and sound manipulation techniques. The first digital synthesizers had just been released, and mere mortals like us were not allowed access to them. We had a (mostly broken) ARP 2600 synthesizer and quite a few reel-to-reel tape decks to play with. This, for me, turned out to be an advantage, because Dr. Douglas spent quite a bit of time on how sounds worked, were generated, and how to manipulate them.

One of his lectures focused on how the human ear perceives timbre, or tone color. He told us that what we hear the instant a sound starts is a huge part of how our brain determines what is making the sound. We had already studied the various shapes of sound waves, the most basic three being sawtooth waves, square waves, and sine waves, and that what gives each wave its basic shape is what overtones are present. Sine waves have no overtones, square waves have only the odd-numbered overtones, and sawtooth waves have all overtones present in equal strength.

So, when Dr. Douglas told us that the very beginning of a sound, i.e., the attack, is what determines perceived tone color, I raised my hand and asked, “But I thought it was the shape of the sound wave that determined tone color?” That turned out to be one of the most important questions I had ever asked a teacher (for my education anyway). He must have seen the confused look on my face when he reaffirmed his statement that color was determined by the attack, because he said, “I’ll tell you what, next class we’ll do an experiment. I’ll need you (pointing at me), and Bill, and Melanie to bring your horns.”

Next class, I had my trumpet, Bill had his alto saxophone, and Melanie had her oboe. We had already studied using the tape decks to manipulate sounds by cutting and splicing audio tape and making tape loops (look up Musique Concreté if you are curious). He recorded each of us playing a concert A for a few seconds, then cut the tape and made a separate loop of each of our three sounds. He mixed them up, then picked one at random and fed it into the tape deck. “Who is this?” “That’s me (trumpet).” “Ok, fine, who’s this?” “The oboe,” came the answer. “And how about this one?” “Me, Bill said.

Dr. Douglas then took each tape loop, ran it by hand over the tape playback head to find right where each sound started, and cut an inch off the very beginning of each sound. The tape deck speed was 7.5 inches of tape per second, so he basically removed about the first 0.14 seconds of the attack. He spliced each piece of tape back into a loop, then picked one and ran it through the tape deck. (If you’re interested, you could easily reproduce this experiment today with free software like Audacity.)

“Ok, now who’s this?” There was silence, then finally someone went, “Uhm…” “Well, let’s try another!” We could tell this second tape loop was a different sound, but none of us could tell you for sure what instrument was making it. The same held true for the third tape loop. We could tell it was different, but couldn’t figure out who it was. It turns out the shape of the sound wave from a trumpet, an alto saxophone, and an oboe, are basically identical if you see them on an oscilloscope screen. The only real difference is the attack.

The lightbulb moment for me was: Unless you have complete control over the attack of your sound, your instrument will not have the proper tone color. If you don’t control the beginning of the sound with proper technique, you will not sound the way you should.

I have tried to stress this to all my students since.

So, given the above, here is one technique I’ve used for years to help brass and woodwind students produce good, clear attacks.

Practice breath attacks, i.e., starting the tone with just the airstream, and no tongue stroke at all. The tongue should be placed in a relaxed position, forming whatever vowel sound is appropriate to the instrument being played. A well-formed embouchure and airstream should be able to produce a clear attack as soon as the air starts, with no interference from the tongue, and no movement in the jaw. If the attack isn’t clear, it often exposes problems with the airstream, embouchure formation, the reed, or the placement of the tone hole in the case of the flute.

A couple of common problems can creep up. Either there will be a puff of air before the sound starts, or there will be a delay in the sound, followed by the sound suddenly “popping” (or in some cases, exploding) out of the instrument. Without going into too much detail (or this article could quickly become a book), here are some common causes of each problem:

Problem 1: The puff of air before the sound begins

This is almost always caused by the embouchure forming too late in the Breathe, Set, Play process. In the case of the brass instruments or the flute, it could also indicate the aperture being too open. This could be a result a malformed embouchure, or of the lip plate pressing down on the bottom lip of the flutist, or the mouthpiece trapping the lips in an open position.

In the case of the reed instruments, poor timing of the embouchure set also can cause the puff of air problem. It could be due to a warped or chipped reed, incorrect reed placement on the mouthpiece, or not enough reed in the mouth. There may be other factors of course, but this paragraph covers most of the common causes.

Problem 2: The delay and pop

This is rare on the flute, so I will move on to the others. In the case of the brass instruments, this is almost always caused by the student pressing the mouthpiece into the lips far too hard. The air cannot escape due to the lips being “squished” together, and the air pressure builds up until the lips can no longer hold the air back, and “Pop!,” or sometimes, “Blat!” comes out at the beginning of the sound.

The problem can be worsened by the point where the lips come together happens to be lined up with the edge of either the top or bottom teeth. The point where the lips meet should be right between the open teeth. In the case of the reed instruments, one common cause is biting down on the reed too hard. That said, sometimes biting down too hard on the reed will cause a combination of the “puff of air” attack, followed immediately by a “Pop,” “Squeak,” or “Honk!” Again, these are not the only causes, but the most common.

Obviously, correcting the flaws of course involves figuring out what caused the undesired sound to happen, and then coaching the student to not do what caused the problem to happen. Yes, I know this is easier said than done, I started beginners for more than 20 years!

Tips for Working with Beginners

Speaking of beginners, I always started my beginning students with the breath attack method. It always made for some “interesting” sounds in class, but it allowed me to address breathing, airspeed, and embouchure problems right as the kids were starting out. This helped to avoid a lot of bad habits developing. I would not even mention the word “tongue” in class for the first few weeks, and I would only begin teaching tonguing when the class as a whole finally reached the pages in their beginning method book that introduced quarter notes.

Spending such a long amount of time without tonguing allowed the kids to develop good habits with embouchure formation and airflow. It also allowed me enough time to stay on top of the students individually and address their particular issues.

Thoughts on Working with Others

The breath attack technique is not only good for beginners, it can work wonders with more advanced students as well. It exposes the same flaws as it does in beginners, and almost all of the causes and corrections still apply. Starting the day’s warm-up and initial sounds with breath attacks only is something I’ve done with high school groups and brass sections of top-tier DCI corps. Sometimes even advanced players need the chance to “find” their embouchure and breath control on the first few notes of the day, and warming up that way allows them the chance to do so.

When I start hearing good, resonant sounds and pristine attacks, I know the musicians are ready to start adding the tongue back in. When working with a brass section, I will often have them start lip slur exercises with breath attacks to reinforce the need to have a proper embouchure set and airflow before starting the slur. Playing lip slurs without these things in place is often counterproductive.

I hope you find the breath attack method useful in helping your students learn to produce, or simply improve upon, great sounds!