Today, on National Teacher Day, we recognize the contribution that music teachers make in our lives and world. The students you work with today will go on to accomplish great things, and your influence will be a big factor in their success.

Every so often, a student gets an opportunity to show a teacher how much their work has made a difference. This is one of those stories.

Last fall we announced the Big Phat Jazz Challenge. This contest encouraged young performers to submit recordings of themselves playing along with tracks from Gordon Goodwin’s new album, “An Elusive Man.” Gordon then determined the finalists, with the grand prize recipient winning a trip to a master class with Gordon, in Boulder, for themselves and a guest or chaperone.

Last December we announced that eighteen-year-old Connor Jenks was the winner. We were intrigued when we learned Connor chose his middle school band director, Jamie Clark, to accompany him. We immediately thought that there must be something special about Mr. Clark.

And we were right.

Mr. Clark was my band director from 6th to 8th grade. He was a huge mentor and inspiration for me both personally and musically. Mr. Clark taught everyone in the program the importance of hard work, kindness, teamwork and much more.

He made the band room a safe and fun place where I made most of my friends, many of whom I am still really close with. Back then we called ourselves the “Bandies” because we always hung out at the band room. Before school, during lunch, and after school you would always find the band room alive with friends and music.

Mr. Clark was the person I knew I could always talk to no matter what and I’m sure I wasn’t the only student who felt that way.

Musically Mr. Clark pushed the bands to their best, never accepting any level of mediocrity. The big band rehearsed before school every Tuesday, Thursday, and Friday. When we didn’t practice enough he would let us know. When he could tell we put in the work we would have so much fun. His sense of humor was a big part of band experience. For all three years I was in the big band it was a second family to me. Absolutely without any doubt, it was the band that got me through middle school and made those years some of the best of my life so far.

Mr. Clark would always take time for me. If I made a really bad mistake during a concert, or thought my solo sucked, he always found a way to make me feel good about it and teach me the value of practice and hard work.

When I was chosen for the Gordon Goodwin Big Phat Band Challenge I was told I could bring whoever I wanted. I knew immediately it had to be Mr. Clark. He was the person that got me so interested in The Big Phat Band and always told us that in addition to practicing, listening was just as important. I would come home and listen to the Big Phat Band while doing homework and then grab my sax and practice.

It is thanks to Mr. Clark – and all of the other wonderful music educators – that I have dedicated my life to music and the saxophone.

I first heard about Connor Jenks when he was in fourth grade. Steve Curtis, the elementary school band director who started him on sax told me that he thought there was something special about Connor…and he was right. Connor is an extremely talented musician as evidenced by his recognition in the Big Phat Jazz Challenge. He plays with a maturity beyond his years and his improvised solos capture audiences’ imaginations with his storytelling abilities and his technical virtuosity.

Any music teacher who has a few years under their belt will tell you that many students have a great deal of talent but few take advantage of their natural abilities. To me, this is what separates Connor from most other young musicians. In more than 25 years of teaching, rarely have I seen a student with such dogged determination to succeed.

There are two reasons for Connor’s ability to focus and work as hard as he does. First, he genuinely loves music. He adores it. Second, he learned the value of hard work and persistence when he in the early years of elementary school. As a young boy, Connor was diagnosed with dyslexia and it was a tremendous challenge that he had to overcome and he did so with resolve and dedication that has served him in everything he has done since. The combination of talent and a remarkable work ethic has allowed Connor to play far beyond his years.

I remember Connor always having a smile on his face…he just loves playing. Connor never had any interest in putting himself above or before the band. He was and is a great team player. Often, other students would be intimidated by his improvising and would be hesitant to solo when he was around. Connor always took this opportunity to build his fellow band members up and encourage them to take the chance to improvise and applaud their efforts. He makes any band he’s in better not just by his ability but also by his attitude.

As a teacher, I am incredibly proud of the musician Connor has become. I think he’s going to have an exciting and successful career and I’m looking forward to seeing what he does. I’m even more proud of the kind of person he is today. He is a great player and will continue to improve but he is already a genuinely good person and that to me is more important than what you can do on your instrument.

The mutual admiration that Jamie and Connor share is in itself a great story to share on National Teacher Day. But, like all great teachers, Jamie’s dedication to his students goes beyond music.

The story of how Jamie taught students music and how to deal with the loss of a classmate is told in Mr. Clark’s Big Band: A Year of Laughter, Tears and Jazz in a Middle School Band Room. Author Meredith O’Brien followed the Trottier Middle School big band during the 2012-2013 season. Her book gives us insight into the award-winning director’s unorthodox approach.

“Mr. Clark’s Big Band celebrates the power of music and team camaraderie, of the big heart of a risk-taking teacher, and of a small town which closed ranks to help its children emerge on the other side of grief.” 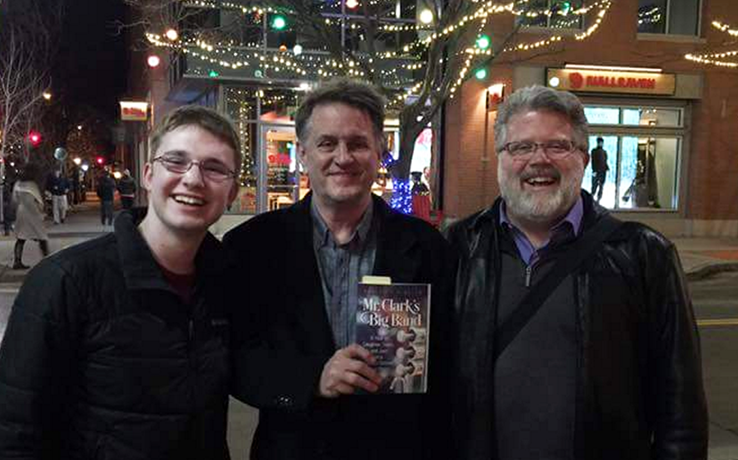 While not every educator gets a book written about them, they all make a difference in the lives of their students.

From all of us at MakeMusic, thanks to all of you for all you do, this month and every month.