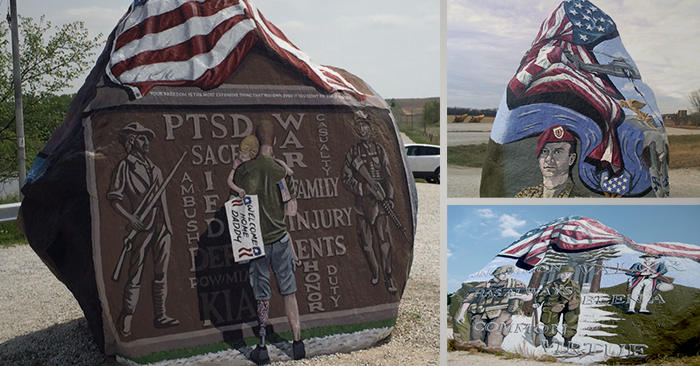 In honor of Veterans Day, I would like to share an interdisciplinary project that was incredibly meaningful for my students as well as our veterans and their families. Perhaps it will inspire you to consider similar projects for future Veterans Day, Memorial Day, or other celebrations.

The Message on the Rock

I first came to know “The Message on the Rock” after talking with its composer, Robert Sheldon, at the Midwest Clinic in Chicago. He told an amazing story of being asked to write a piece for the East Central Middle School Honor Band for a 2004 performance in Brookings, South Dakota.  Shortly after receiving this commission he traveled to Iowa. While there his host suggested he go see a field west of Des Moines for inspiration.

In the field he found a rock that had been covered with graffiti for years. An artist, Ray Sorenson of Greenfield, Iowa, decided that the rock should be painted properly once and for all.  Ray covered the rock with battle scenes from the history of the United States – all the way back to Washington’s crossing of the Delaware.

The story Robert told about his inspiration captured my imagination. On first listening to the piece, I knew I wanted to perform it. You can hear it below.

The composition begins with 37 measures of original material by Mr. Sheldon. Measures 38 to 54 contain short narrations by Thomas Jefferson, John F. Kennedy, and George W. Bush that explain what our Veterans have contributed to our country.  The last quote is “All gave some – some gave all…”

The remainder of the score combines Mr. Sheldon’s original music juxtaposed with fragments of numerous patriotic melodies.  The piece culminates with the Battle Hymn of Republic and America the Beautiful.

The narrator parts offer opportunities to include faculty and community members to be a part of the performance. Glenn Pohland shares his experiences in building community support in this way in a recent blog post. It also doesn’t hurt that “The Message on the Rock” is in SmartMusic, too.

How We Used the Piece

After showing many photos of the rock’s images, I asked my 8th grade students to pick their favorite three sides of the rock. I bought 4’X6’ art canvases onto which my students and I drew and painted these pictures. We hung these paintings in the foyer of the auditorium where the audience saw them as they entered. These paintings now hang in the band room. 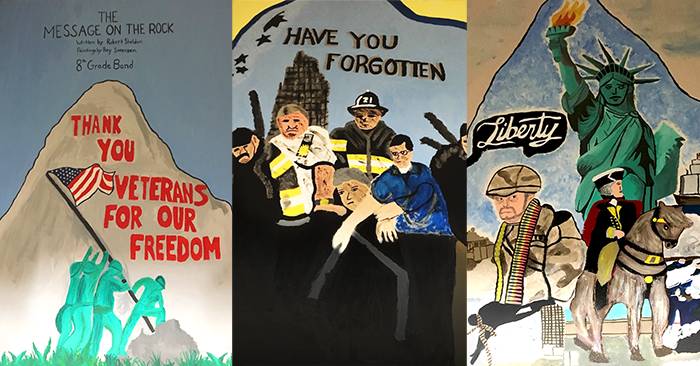 One of the students then suggested that we make a video of all of our family members who have served our country. That idea blossomed into a PowerPoint slideshow. This included images of the rock plus photographs of students’ family members who had served in the military.

At our concert we lowered the video screen to just above the performers’ heads, the lights on stage went blue, and the band played “The Message on the Rock” while the PowerPoint played in time with he music.

When the piece was finished, we asked the veterans in the hall to stand. The audience erupted in applause and there was not a dry eye in the house. Immediately after this piece, we ended the concert with “American the Beautiful” played by all of the members of the 6th, 7th and 8th grade bands.

I hope our experience inspires you to check out Robert’s wonderful piece and to begin thinking of how you might observe Veteran’s Day next year. I’d like to conclude with my personal thanks to all our veterans. 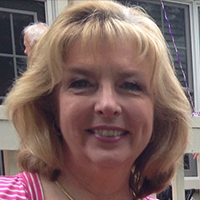 Martha Boonshaft is the director of bands at the Garden City Middle School in Garden City, New York. She received both her degrees from the University of Hartford, with her bachelors from the Hartt School of Music and her masters in educational administration from the School of Education. Martha has been a proponent of SmartMusic for the past nine years. “SmartMusic has had a huge impact on the quality of playing in my program.  It provides each student with the opportunity to progress at their own rate while giving me the opportunity to have intimate knowledge of each player’s strengths and weaknesses. I would never want to teach without it.”