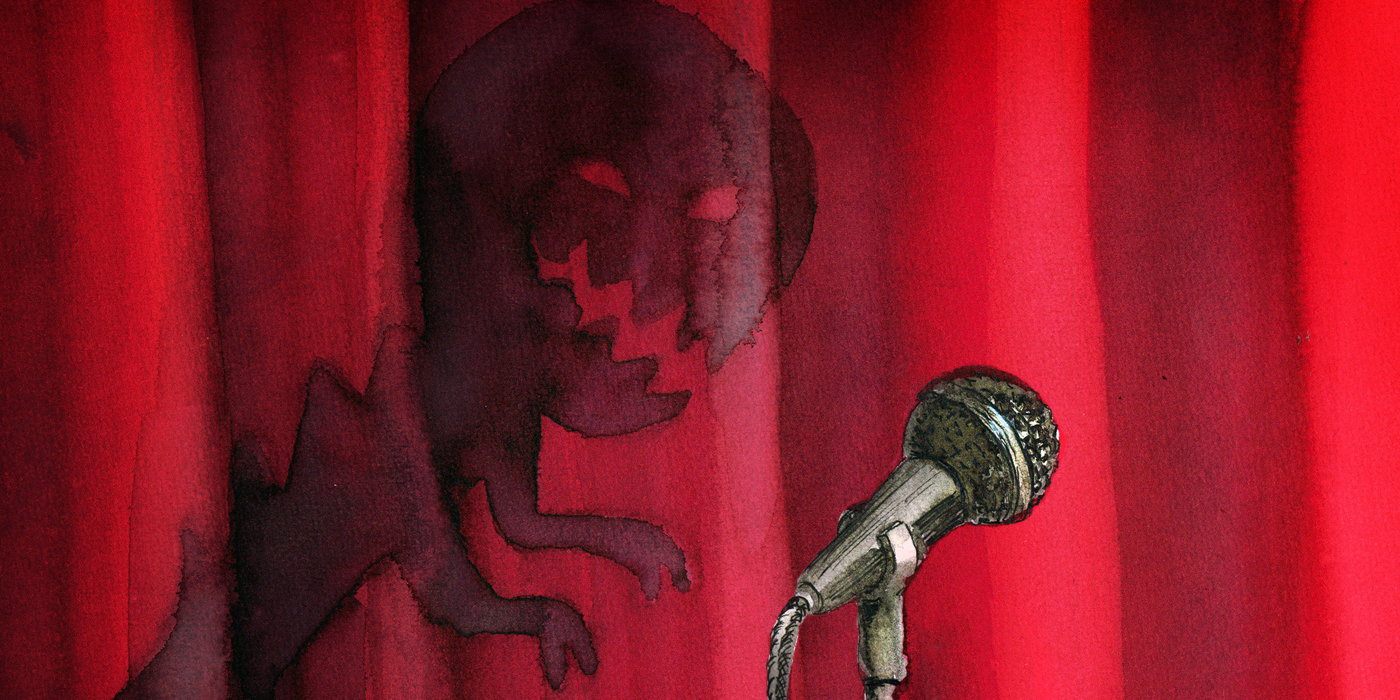 Students are often surprised to learn that music educators experience stage fright, too. “Teachers are supposed to have the answers,” they think! The problem is universal and must not be dealt with lightly.

Some call it “stage fright,” while others call it “performance anxiety.” Whatever you call it – it is very real! People will say, “It’s all in your head.” Obviously, everything starts or stops in the brain, but that’s not what they mean. What they mean is, “Just get over it!” Those who say that have never felt the shaky knees, the knots in the stomach, the urge to vomit, or the trembling hands. Anxiety of every sort is real and must be treated with real methods.

Instead of starting by discussing how to minimize these symptoms once they have begun to occur, let’s learn how to help students to avoid it in the first place! The more they focus on having stage fright, the more they will have it! Just tell someone, “Don’t think of the red car” – they can’t get it out of their mind! Dwell on it and fail – Deal with it and succeed.

In order to deal with anything in life, we must first “own” it. “Admit it, I am scared and I’m afraid I will bomb it!” Once you take ownership of the problem you can then start to deal with it. Part of this ownership involves asking and answering essential questions about where these feelings come from, why they happen to me, and what can be done about them.

Where do these feelings come from?

The physiological causes of stage fright come from your body reacting normally to anticipated stress and preparing the “fright, fight, and flight” hormonal response, due to some or all of the items listed above. This is an absolutely normal process.

Stage fright is the end result of external cues sent to the brain, which become internal messages, to which the brain becomes pro-active. The self-preservation instinct says, “strike first for protection against the unknown.”

To deal with this, we must understand, practice and teach, knowing that most people:

What can be done about stage fright?

This is where the educator and student must take charge. There are many things that can be done to combat stage fright. Many of them must be repeated until they become second-nature. Stage fright will always be a problem when it is the primary focus. When the focus is elsewhere, our body/mind resources are automatic and dispel fear, release powerful enabling hormones, and bring self-confidence.

There is a well-known “slippery slide” to performance failure and an equally powerful “positive approach” to performance success. We can plan to be self-confident or self-condemning. It’s our choice! We are in charge of our mind and body – and must practice doing taking charge. It is a decision that is always made, whether consciously or unconsciously.

In order to get to the bottom of our unique response to stress and anxiety, we must first take care of the obvious reasons for its presence. We all know that insufficient practice, poor rehearsal ability, and simply not being prepared will produce negative results – this is normal and should be expected.

Preparation involves the whole body and the whole mind, lifestyle, and environment – and much more. Anxiety is a teacher and must be welcomed then turned into energy. Is it not reasonable to assume that if others are going to give their time to listen to you, that you be just a little anxious to do a good job? Of course, it is.

What then must we do? Modeling and teaching the following will help.

Be prepared as a musician

Know the music, the composer’s intent, the intended mood, and of course, have it as close to memorized as possible. “Own” the music.

Does eating have something to do with performance anxiety? Absolutely. Caffeine stimulates, many foods produce too much acid, others too much mucus, others (including spicy foods) dull the taste buds and reduce production of saliva, some produce too much saliva, others cause flatulence. Eating too closely to performance time can impair efficient breathing, bodily urges, and thirst. Typical “fast foods” have excessive amounts of sugar and salt, both of which cause brain changes from the “sugar-high” to thirst and water retention in body tissues, as well as normal physiological functions which are inconveniently timed.

Take only medicines that are prescribed by your doctor! Attempts to treat yourself, even with “harmless” pills are rarely if ever successful. Often medications you think are harmless are not harmless at all. All drugs, prescription and over-the-counter, produce unwanted side-effects. If you doubt this, talk with your doctor or pharmacist.

Allergy medicines tend to produce dry mouth and body. Nicotine and alcohol are extremely harmful in that they produce massive reactions in the cardiovascular hormonal, neurological, and physiological systems, which in turn can cause nervousness, drowsiness, inability to focus, memory gaps, and confused thinking.

Some people attempt to deal with stage fright by using drugs called Beta Blockers (propranolol, atenolol, metoprolol, etc.) which should never be used except by a physician’s prescription for a specific problem. These are powerful medicines for heart problems.

All other means of dealing with anxiety should first be found totally unsatisfactory before using medicine, and even then, leaning on external means to fight an internal problem, often leads to dangerous drugs, alcoholism, and drug addiction. Even “proper” medicines can become “gateway” doors for developing addiction.

The average person requires 7-8 hours of sleep per night. Sleep deprivation leads to DNA malfunction, unfulfilled body tissue repair, brain-rest deprivation, and unconscious anxieties, which often then become evidenced when under stress, such as performance.

“Sleep-debt,” i.e., attempting to make up for sleep loss by sleeping overtime later, does not work. Sleep is used as it is acquired, and only minor benefits come from delayed “catch-up.” Body and mind growth, maintenance, and repair depend on sleep. One hour of sleep before midnight is worth two hours after midnight for most of us who are diurnal/nocturnal creatures.

Breathing is an unconscious mechanism 24/7 except when you need to control it, understand it, and use it wisely. There are many theories about “diaphragmatic” breathing and other approaches. Take a good look at Arnold Jacob’s fine book “Wind and Song” and forget the mechanics – the body will do what it is instructed it to do. Over-breathing is just as harmful to musical playing as is under-breathing.

The Alexander Technique and other mind/body approaches are often helpful. Even if a teacher is not certified in these techniques, learning about them will help students to develop proper standing and sitting posture, breathing, and thinking in ways to promote health and musicianship.

Finally, as you teach and/or practice ask:

If this routine is followed, if it is understood at a deeply personal level, and conscientiously “owned,” many of the causes of stage fright will be tackled.