At the start of each semester I always find myself reflecting on the importance of good beginnings. These can include the way we start playing an instrument, the way we set up our practice habits, the way we begin a new school year, or the way we begin a new job. When starting a new flute student, there are so many hopes and goals that it can be difficult to decide what to focus on. For band directors who start multiple students on different instruments, this is even more challenging. As I have gained experience as a teacher and clinician, I have found that there are really only a few things that are critical for flutists to establish when they first start playing. Below are my suggestions for creating good habits in your beginning flute students, as well as how get your returning flute students back into shape.

Holding the flute properly is one of the most critical habits I instill in my beginners. Embouchure placement, tone development, and technical development all depend on a student’s ability to hold the instrument securely and without tension. For example, is impossible to produce a good tone if the flute is slipping every few seconds. It is also impossible to play fast passages if the hands are tensed to keep the flute still. This is especially challenging on the flute because it is held asymmetrically. Because of this, I spend a significant amount of time establishing proper posture and hand position. I discussed several aspects of hand position in my previous blog post.

Making a sound on the flute is notoriously difficult for some, and embouchure refinement can continue well into a student’s college years. So what should teachers focus on in the beginning stages? For me, the answer is headjoint placement and alignment. To check for this, be sure that the tone hole is lined up left to right with the center of the student’s aperture. This is not always in the center of the lips! When the student blows across the flute, you should be able to see a small area of condensation on the opposite side of the tone hole. This area of condensation should be directly in the center of the tone hole. Since this is visible, students can verify this alignment in a mirror fairly easily.

The headjoint should also be placed so that the lip plate sits in the nook of the chin. This allows the bottom lip to cover part of the tone hole. The majority of students will place the flute too high on the lip. I have my students roll the flute all the way in so that tone hole covers the center of their aperture. Next, I have them slide the flute down the chin (it is still rolled in at this point) until they can feel the bottom edge of the tone hole just BELOW their bottom lip.

Finally, I have them roll out so that the tone hole is more or less parallel to the ground and the bottom lip is covering about a third of the tone hole. From here they should be able to make a sound, but if they struggle, make sure that the jaw is open enough to aim the air into the flute and that the aperture is small enough to focus the airstream. For more on this topic, check out this video as well as others by Whitney Reagan and Sir James Galway.

Use the Tongue to Articulate

With a large flute section it can be tricky to catch the students who aren’t  using their tongue to articulate. Many students will use their throat or simply break the airstream between articulated notes. Once they slip into this bad habit, they often blend into the cacophony of the band (or blend into the top chair players who are articulating properly) without realizing that they are not tonguing. This habit manifests in a flute sections that sounds muddy and diffuse. To make matters worse, this habit is incredibly difficult to fix if it has gone unchecked for several years. To combat this, I monitor my students very carefully in the first several months to make sure that they are tonguing consistently.

As any professional musician knows, it is much easier to stay in good shape than it is to get back into shape after a hiatus. The reality is that even though we may aspire to practice every single day of our lives, time off is often unavoidable and can even be beneficial. Likewise, students finish their spring semester in (hopefully) the best shape of their young lives, only to return from summer break with rusty lips and questionable memory. While there are many ways to get students to practice over the summer, some amount of time away from the instrument is likely.

Over the course of 23 (yikes!) years of playing the flute, I have taken my share of time off. Some of the breaks were short and some, like the weeks leading up to my wedding, were a bit longer. By now, I know exactly what I need to do to get my chops back to performance level. My routine focuses on regaining any lost precision in embouchure and breath control since these are the things that suffer most when I do not play regularly.  In this article, I will introduce three of my favorite exercises for getting back in shape. Once a flute student has learned these exercises, the complete routine can be played in less than ten minutes.

Whistles tones, also called whisper tones, are a soft whistle-like sound produced by blowing a very faint airstream across the blowing edge. Many students have probably produced whistle tones accidentally at the end of a dimuendo. Learning to produce and control these elusive sounds can help students develop breath control and fine embouchure control. Practicing whistle tones is also an excellent way to bring back that control after a hiatus from the flute. Whistle tones are easiest to produce using the third octave fingerings, but they are possible to produce on any note. It may take a little time for students to be able to hold a whistle tone, but even attempting to steady these tones will snap a rusty embouchure back in few practice sessions. For a demonstration, check out this video.

The flute, like other instruments, can produce four or five harmonics by overblowing a single note in the low register. Most flutists include some form of harmonics in their daily practice routine because they are excellent for improving embouchure accuracy and tone quality. There are many different versions of harmonics exercises available. My favorites combine accurately hitting each harmonic and then matching the tone of the regular fingering for that pitch to the harmonic. Harmonic fingerings are more resonant than the regular fingerings for many notes, but their timbre and pitch make them impractical in most musical contexts. By attempting to match the resonance of the harmonic fingerings while playing the regular fingerings, flutists can develop a more resonant sound overall. Below is a harmonics exercise that I learned while studying with Christina Jennings at the University of Colorado. 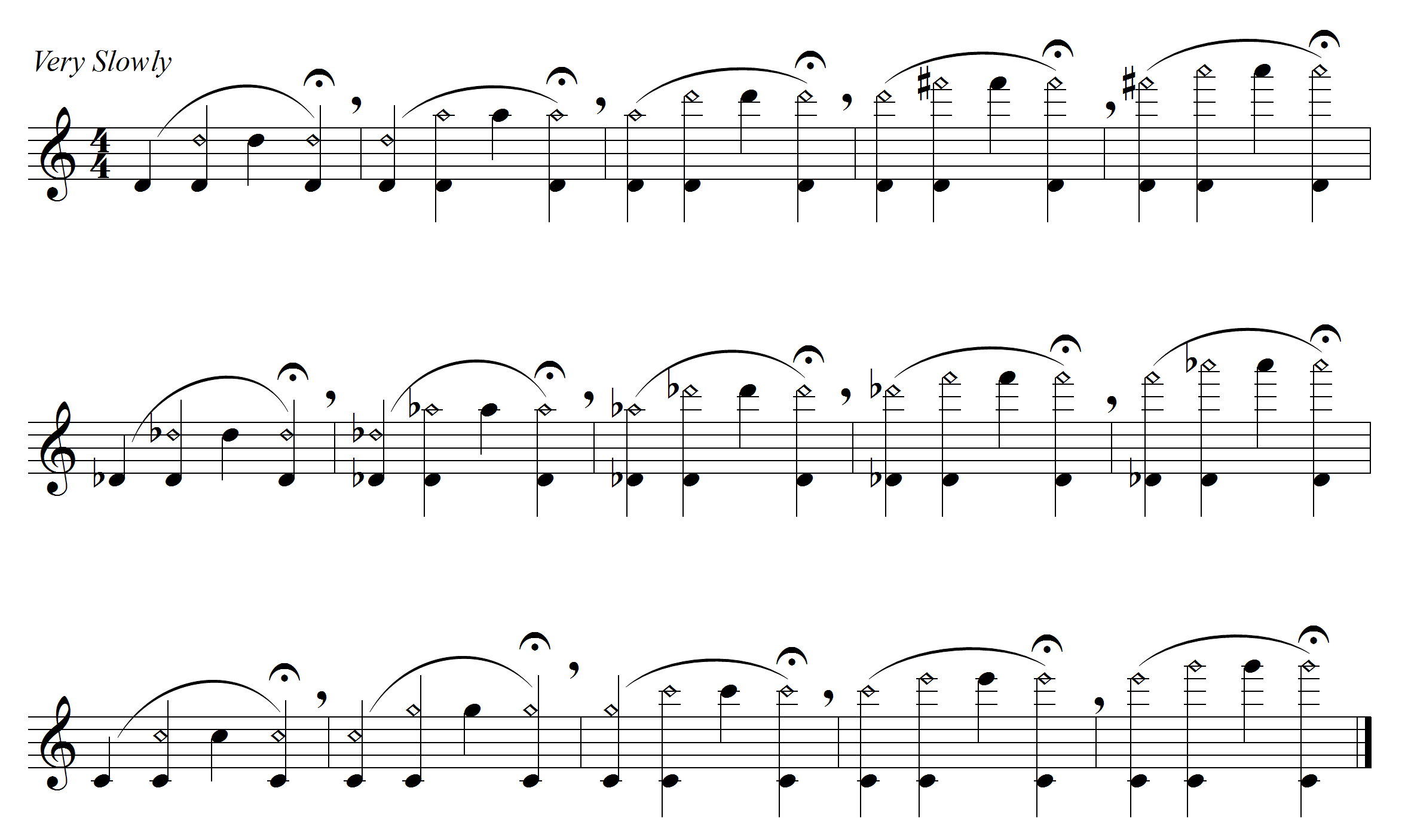 Tongueless attacks, also called breath attacks or ha pulses, are also a staple exercise for many flutists. The goal of these exercises is to produce a quality tone from the very beginning of a note.  Too often the embouchure doesn’t focus all the way until slightly after the articulation. By removing the articulation, flutists can hear if their embouchure is in exactly the right spot at the very beginning of the note. I always have young students follow up a series of tongueless attacks by playing the same notes with proper articulation, just so they do not accidentally develop a habit of leaving off the articulation. This should not be necessary with advanced students.

Here is an example of an exercise using tongueless attacks on a major scale, but one could easily substitute an arpeggio or the notes of a piece instead. During the fermata, students should find the best part of the note and remember exactly how it felt when they were producing that tone. Next, the students will play a series of four attacks on the same note using no tongue and thinking the syllable “ha.” The goal is to get back to the best part of the sound right away. Finally, the students will add the tongue back in and play a series of four regular attacks. Here, the goal should be to add the tongue back in without compromising the good tone that they have discovered.

Best wishes to you and your students as you begin the new school year!

Dr. Carolyn Keyes is a flutist, educator, and arts advocate whose love of performing has taken her around the United States: most recently to join the faculty of Cameron University in Lawton, OK.

She has been a member of the Longmont Symphony (CO), the Lone Star Wind Orchestra (TX), and was a frequent performer with the Cheyenne Symphony (WY). A finalist and prize winner in the Bruce Ekstrand Memorial Competition, Carolyn also received honorable mentions in the National Flute Association Masterclass Competition and the Texas MTNA Woodwind Young Artist Competition.