Conducting a jazz ensemble is a contradiction in terms for some. Many of the bands that we study, respect, and admire feature no conductor at all. The only “conducting” might be the lead alto player cutting off the final chord. Most professional big bands are not conducted in the traditional sense, although modern bandleaders such as Maria Schneider and John Clayton are very animated conductors.

The conductor of any ensemble is responsible for all aspects of preparation and performance, and in this way the role of the jazz ensemble conductor is not different than that of a concert band or orchestra conductor. The gestures and activity from the front of the ensemble, however, are different in a number of ways. I would like to share a few of these differences.

Start the band with a count off. Say it loud and say it proud. A count-off is usually two bars long, although at very fast tempos four bars is used. Slower tempos often require only a single bar of count off. Let your ear and your sense of rhythm be your guide. Any pickup notes should be included in the count-off bars. This means that if there are pickups on beats 3-4 before the first full bar, the count-off will only be one and a half bars long.

Establish a tempo with handclaps or finger snaps. Style and tempo will determine if you snap quarter notes or half notes. Aside from a ballad tempo, most anything in a swing style will be snapped as half notes, and usually on beats 2 and 4, as this helps to indicate the swing feel. Non-swing styles may be snapped or clapped on quarter or half notes, and usually on beats 1 and 3. Once the tempo is established, verbalize the count-off by saying 1 (x) 2 (x) – 1 2 3 4. The “(x)” indicates a silent beat.

2. Less Is More – Don’t Conduct All the Time

Once the band is started, encourage everyone to listen to the rhythm section for tempo, and to one another for balance and blend. The ensemble should maintain consistent tempo by listening to the rhythm section, not by watching you present a flawless conducting pattern. Sometimes it can be hard to know what to do once the band is counted off. Many successful jazz ensemble conductors simply step to the side. If your ensemble is mature enough to allow that, go for it. Most young bands appreciate someone standing in front, though, for security if nothing else.

Feel free to give cues or make dynamic adjustments but your gestures will be much more limited in front of the jazz ensemble. A big band is really a large chamber ensemble and should be treated as such. Too much conducting is not only distracting, it does not encourage students to develop the necessary listening skills needed to be successful musicians.

3. Keep It Together – No Conductor Likes a Train Wreck

A jazz performance can ebb and flow, and sometimes a conductor is necessary to hold things together or to get things back on track. Stay out of the way as much as you can, but sometimes things happen that require a conductor to prevent a train wreck. Listen carefully and make certain the tempo remains steady. If adjustments are needed, make eye contact with the bassist and drummer. Those are the instruments best equipped to change the tempo of the band.

Open solo sections can also get tricky. Encouraging many improvisers is a very cool thing to do, but sometimes things can go awry. Make certain that you have the order of soloists penciled in your score, and that you keep careful track of who is playing and cue who is playing next. The players should have all of this information also, of course, but nerves often take over during a performance and may cause forgetfulness or a lack of concentration. Even though we have been encouraging listening and personal responsibility among the players, someone has to be in charge. That someone is you.

Large ensemble conductors are notorious for walking off stage after every piece, only to re-enter again and again. The first entrance is dramatic and exciting. By the time this happens for the sixth time I begin to wonder if it is just an excuse to milk more applause out of the audience.

Modern audiences already have short attention spans. Unless there is a huge change of personnel or set up happening, there is no reason to leave the stage until the performance is completed. Count-off – play – cut off, and then get ready for the next one. Keep it moving. Your audience and the band will thank you for it.

5. Don’t Be a Stranger – Talk to the Audience

So what to do between tunes? Engage the audience! Audiences crave connection with the performers, and you are in a unique position to do just that. Talk to them about any element of the performance (Who were the soloists? What did they learn to be able to do what they did?); the music (why did you choose that particular piece? what about the composer or arranger?); or other things happening in the music department (advertise upcoming concerts, recruit younger students). These are just a few of the things you can talk about. Keep it brief and to the point. While you don’t need to read from cue cards, it does help to sketch out in advance what you plan to say between each piece. Recall the previously mentioned nerves from #3. They can affect us, too!

Even better than you talking to the audience – have students talk to the audience. Assign a student or a group of students to do a little research on the music being played and have them share their findings with the audience. The audience gets to engage with the performers, the students learn communication skills, and everyone learns a bit more about the music. Everybody wins!

At the end of the day, the conductor of any ensemble exists to help the group sound better. It is best accomplished with a combination of careful listening, clear gestures, and good direction. As a smaller ensemble, a jazz ensemble can assume more collective responsibility for the music than what may be practical in a larger concert band. Adjust for this difference, and ALL of your ensembles will benefit. 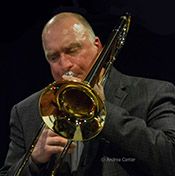 Dean Sorenson is Associate Professor and the Director of Jazz Studies at the University of Minnesota as well as a prolific and highly sought-after composer, arranger, trombonist, educator, and clinician. Dean’s latest project is Colors of the Soul, a CD of original music for sexet. His most recent book is First Place for Jazz, a new and innovative method for beginning jazz players published by the Neil A. Kjos Music Company. Look for the new EXCELLENCE IN JAZZ PEDAGOGY series, a new collection of books dedicated to the art of teaching jazz, also from Kjos. Dean is frequently featured at festivals and conventions around the country and abroad, and maintains a full schedule of concert and recording dates as a Yamaha performing artist. For more info visit www.deansorensonmusic.com.

Photo of the author performing with Buffalo High School’s Jazz I (in February 2015) is used with permission.