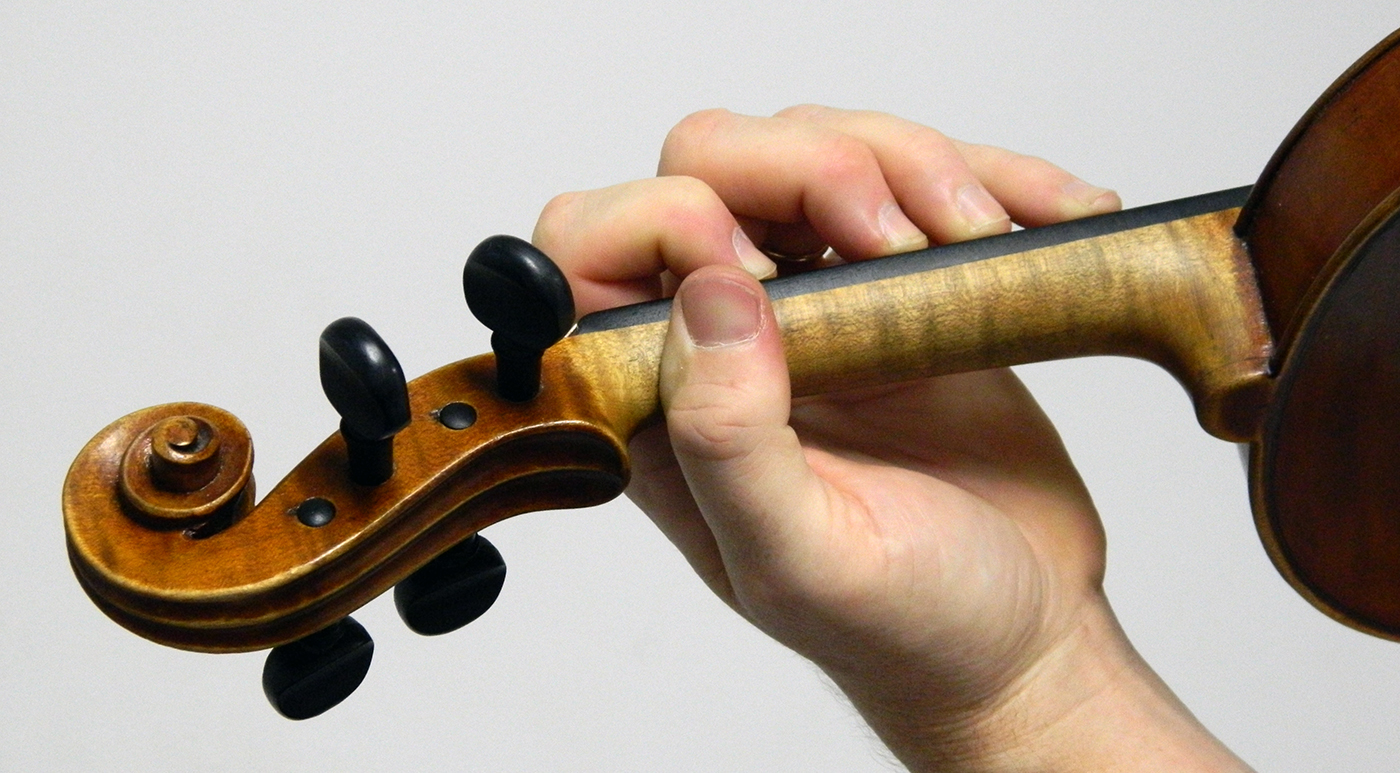 Do your students seem to find a thousand creative ways to thwart your attempts to get them to use their fourth finger? Do you often wish that your violin and viola students would play with a better left wrist position without you having to constantly remind them? Many of us have gone to great lengths to encourage students to play with a straight wrist. Some of these approaches are comical. For example, pretending you are holding a little baby chickie in your left hand, or holding a “chickie funeral” once the hand has collapsed and killed the poor creature.

What if there was a way that we could be more proactive at the front end of instruction that would prevent us having to correct and nag so much on the back end? Is there anything we could do differently in the initial instruction of the left hand that might allow our students to conceptualize the hand and arm position differently and lead to greater success later on?

These are the questions I have asked myself often throughout my years teaching in the public schools and in starting students on secondary instruments in higher education.

In 2009, I had the perfect opportunity to explore this issue more deeply. I was working on a master’s degree at the University of Georgia while teaching orchestra at River Trail Middle School, a public school in Atlanta, GA. I decided to do some action research with my students in which I started an experimental group of beginner violin and viola students with all four fingers down.

I introduced A, fourth finger on the D string, as the first fingered pitch in my instruction. Students then learned G (third finger), F# (second finger) and E (first finger). This meant that each time they positioned their hand to play, they would place all four fingers down and then subtract any finger not needed (a subtractive method). This was in direct contrast to the method of adding fingers one at a time used by most popular method books. Many heterogeneous class methods start students by introducing each finger on the D string one at a time in the following order: E1, F#2, G3. Most class methods do not address the fourth finger until much later (usually more than halfway through the first book). Even those that start with the third finger (G on the D string), delay fourth finger until much later.

Interestingly, over months of reading I discovered that many of the most well-respected private lesson pedagogues did not approach the left hand in this way. Many teachers, including Ivan Galamian, Leopold Auer, Samuel Applebaum, Francesco Geminiani, and Leopold Mozart, focused on setting the left hand by placing all fingers down simultaneously. This forces the elbow into a position that allows every finger (including the pinky) to be dropped into place easily without excessive extra motion of the hand or arm.

This realization prompted me to consider the implications for adapting this approach to group instruction. While we all know that not everything that works in a private lesson will work in a class, we also know that eventual mastery of any musical instrument depends heavily on the quality of early instruction on that instrument. Furthermore, the mental concepts and physical habits formed within the first year of instruction can have a significant influence on all subsequent efforts.

Introducing the fourth finger earlier in instruction is beneficial for several underlying reasons. Physically, placing all four fingers down forces the elbow into a position where students can easily reach fourth finger when they need to without having to readjust the twist of their hand or arm. Not developing the strength and agility of the pinky (which is naturally the weakest and shortest finger of the hand) means that the fourth finger only becomes weaker and more difficult to play in relationship to the other fingers over time.

Cellists and bassists usually have no fear of fourth finger as they play it from the very start and consider it no more difficult than other fingers. On the other hand, violinists and violists often fear and avoid this finger. We may exacerbate this effect by delaying its introduction and failing to physically strengthen this finger at the same rate as the others.

Students who play for half a year before encountering the fourth finger may not only become more fearful of the finger, but may also develop a fundamental misconception of how their instrument is fingered. It is possible for them to spend a good portion of their first year of playing believing violin/viola to be primarily a three-fingered instrument (with the elbow being placed to conveniently reach those fingers). Many may treat the fourth finger like the fine china that you only need to pull out on special occasions for guests. This is a fundamental misconception of how the instrument is played. It is a four-fingered instrument with all fingers being equally important.

When students finally do encounter the fourth finger, the finger is weak and their entire arm and elbow may have to be repositioned to reach it. This can reinforce the fear and apprehension of playing it as well as make it difficult to convince them later of the value or need for it.

The good news for me was that when I reversed the order of finger introduction with my students, their success did not seem to be hindered by either physical or psychological factors! Students who started with fourth finger first outperformed others significantly on correct positioning of the left hand, wrist, and arm as well as in their voluntary use of thier fourth finger. In fact, even in sight-reading tasks, students chose to play fourth finger over open strings (since four had become their “default” fingering for these notes)! These students also scored higher on intonation in every performance task given them, including sight-reading.

Skeptical? I encourage you to give it a try with your own students using whatever method book you currently have. Simply take an exercise that students have previously played using open A and teach them to play the same exercise with fourth finger on the D string instead. Then, select exercises that introduce G (third finger), F# (second Finger) and E (first finger) in that order. In doing that with a heterogeneous string class, you will find that you have just introduced fourth finger first to every instrument in the orchestra and not just to upper strings. For me, this made a big difference in successful left hand, wrist, and arm position, more voluntary use of fourth finger (without nagging) and more accurate intonation.

Before I tried it, I would never have guessed that simply changing the order of the fingers could produce such significant improvements. Please try it out yourself and let me know what you find with your students! I would love to hear your feedback.

I wish you and your students all the best as you strive for technical and musical excellence!