Change happens. Students move, graduate, or are abducted by aliens. Whatever the reason, at some point you’re going to need some students to switch to tuba. Here are some ideas that can help make that switch more productive for you, your students, and your band.

Why do you need tubists?

Tubists provide the bass voice for your ensemble. Yes, there are other low brass and there are low woodwinds. But if you really want to hear the root of that chord, check the tubas. Along with the percussion they provide the groove for the rest of the band to “listen down” to. Think of them as the bass player in a rock band or a jazz bassist in a rhythm section. So, for intonation and time – tubas can be your best friends or the source of your struggles. Let’s get the right kids into those seats behind those large brass tubes!

When the tuba section is rocking, you’ll be surprised how much better the rest of your band picks up on their parts. Even your soloists will be able to play more confidently with a strong musical foundation under them.

Playing the tuba is a significant undertaking for a middle or high school student. It is large, unwieldy, makes sounds often mistaken for flatulence, and is difficult to transport in a sports car. Despite these setbacks, we need tubists, so let’s select students who are not faint of heart.

You will need leaders here. Leadership is so important because the entire ensemble is going to be listening to them. These students need to be confident in their decision-making because every note on the tuba is heard. Intelligence is also helpful. They will have to learn new fingerings quickly and will regularly read several ledger lines below the staff.

Where do you find these students? Let’s start with where you don’t.

I don’t recommend switching students who are struggling with moving air and are not strong band students. If they haven’t been successful on their current instruments, it makes no sense to assume they’ll succeed on the more cumbersome tuba. Switching students who are low on confidence, and are falling behind on their current instruments is only setting these students up for failure, which is the last thing any educator wants!

Leadership and confidence are really the most important attributes a future tuba player should have. If the gumption is there, the tuba playing will follow.

Additionally, let’s not ignore physical attributes. The ability to move air is paramount. Swimmers, runners, and athletes in general make good tuba players because their cardiovascular system can handle the airflow required of the instrument. With this in mind, switching students from other high-flow instruments such as the flute and euphonium/baritone make sense. Switching from the trumpet or oboe can be difficult because of the great difference in air speed and the quantity of air that needs to be moved to play the tuba well.

In addition to a good respiratory system, it certainly helps if students can comfortably hold the instrument. While it helps to have larger students with long arms, many tuba stands are available. This can greatly help smaller players, and would probably be a smart thing to consider when setting up any new tubist. Posture is so important, especially when you have to move the amount of air necessary to play the tuba!

You’re going to have to sell the switch to tuba. Even if students are cool with switching instruments, you are going to need to get them fired up about the switch so that they really take to it like a fish to water.

Talk to them about how important it is!

We already discussed a couple ideas for this, but I suggest tailoring the message to each student. Play some cool tuba solos, funky sousaphone playing, rock/funk/hip-hop/tuba recordings, tuba quartets, etc. YouTube is an amazing resource. With about 10 minutes of browsing you can probably come up with several ideas that will make the tuba seem very appealing.

Also, keep pointing them to recordings of great tuba players! A little inspiration goes a long way. If they keep hearing great sounds, it will be easier for them to pick up the new instrument and make great sounds.

Sing, Buzz, Play – Get that Sound!

The old “sing, buzz, play” approach is still the fastest way for students to improve (assuming they have the sound concept from the recordings you’ve shared with them). This is easy, and they can do it on their own for a large number of teaching cycles in a short period of time. Teaching them to practice more efficiently (while always maintaining a high quality sound) is going to pay off more than simply telling them to practice more.

Having students sing melodies, tuba parts, etudes, etc. will help develop their sense of pitch and musicality. These aural skills will be utilized every day in creating the foundation of your band! Then buzzing these parts will make their problems clear. If they aren’t getting a good buzz, they won’t sound good on the tuba. Easy enough; good buzz = good sound.

To get a good buzz, move more air. This makes more vibration, which creates more buzz! Because tuba mouthpiece buzzing takes so much air (there is no added resistance of the tuba), I recommend that students only buzz for 30 seconds to a couple minutes at a time (to avoid hyperventilation), then rest (study their music), and then resume.

Once they get some good buzzing going, they should play on the tuba and get the best sound they can produce. If they get to where they work on their sound for even two minutes a day, their sound will improve a little bit each day.  Best of all, this improvement will transfer to whatever style of music they are going to play.

Get a good mouthpiece

It can be tempting to simply grab a tuba mouthpiece that has been sitting around the band room, clean it up, and give it to your new tubist. Instead, do your student (and your ensemble) a service and take a little time to seek out a better mouthpiece. There are many variations on the Conn Helleberg and the Shilke Helleberg II available today with sharper inner rims to help tubists with cleaner articulations and better response.

Also, take some time with your new tubist to try multiple mouthpieces together. Students with a small mouth or teeth will require a smaller rim size. Many students flounder on the tuba because they were handed a bathtub of a mouthpiece. No one should be surprised when they can’t focus their sound or get a clean articulation.

Get them solos, etudes, etc

This is true of any of your students, but especially new tuba players. Get them music to play! If the only thing they’re given to play are the whole notes and “oom-pahs” of their band parts they will quickly become disinterested. If they have some solos and other material to work on, they will be challenged and will continue to improve.

Think of how much your students improve during the month they spend preparing for solo and ensemble competitions. What would happen if you gave them a solo every month or two to work on? Or perhaps a book of etudes, or something else to play outside of band? While you are on this blog, why not check out everything they can be playing through SmartMusic?

Having tuba students play more than their band parts is so important to their development as musicians. Even if they are playing oom-pahs in their band parts, if they know how melodies are shaped and phrased, they will be more active accompanists instead of just hammering out their parts. The Sing-Buzz-Play methodology also helps them play more musically in everything they do. If they play more music, they will be more involved and active musicians, which is a good thing for you since they are harmonically steering your band!

Challenge and appreciate them

Of course, as good educators, we work to challenge and recognize all of our students.  But give that new tuba player an extra shout out.

I know it’s tempting to prioritize work with the higher instruments on active parts and solo lines.  But take the time to make sure that your low brass feel included. They need to know they are critical to the musical output of the group. It’s important to provide them with a steady stream of challenges to keep them focused through class and working on things on their own.

May you never find yourself in the lurch, scrambling for tuba players. However, should you find yourself in this situation, I hope the above suggestions will  help your  new tubists (and you) make the transition as smooth as possible. Also, please feel free to apply this information to all your beginning tuba and low brass students. As a result you may retain more students from your beginning band all the way through high school. Good luck! 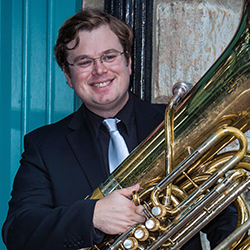 Dr. Paul Carlson has performed around the globe as a soloist and as a member of the internationally renowned Dallas Brass. He has completed studies at the University of Illinois (B.M.), the University of New Mexico (M.M.), and the Indiana University Jacobs School of Music (D.M.). He has studied with Dan Perantoni, Richard White, Mark Moore, and Joseph Goble. Paul has performed with a number of symphony orchestras, brass quintets, and other groups. An active soloist, he has presented recitals at the last two International Tuba Euphonium Conferences.

Paul also serves as Affiliate Professor of Tuba and Euphonium at Grand Valley State University, and is a Buffet Crampon USA Artist performing on B&S, Meinl Weston, and Besson tubas.