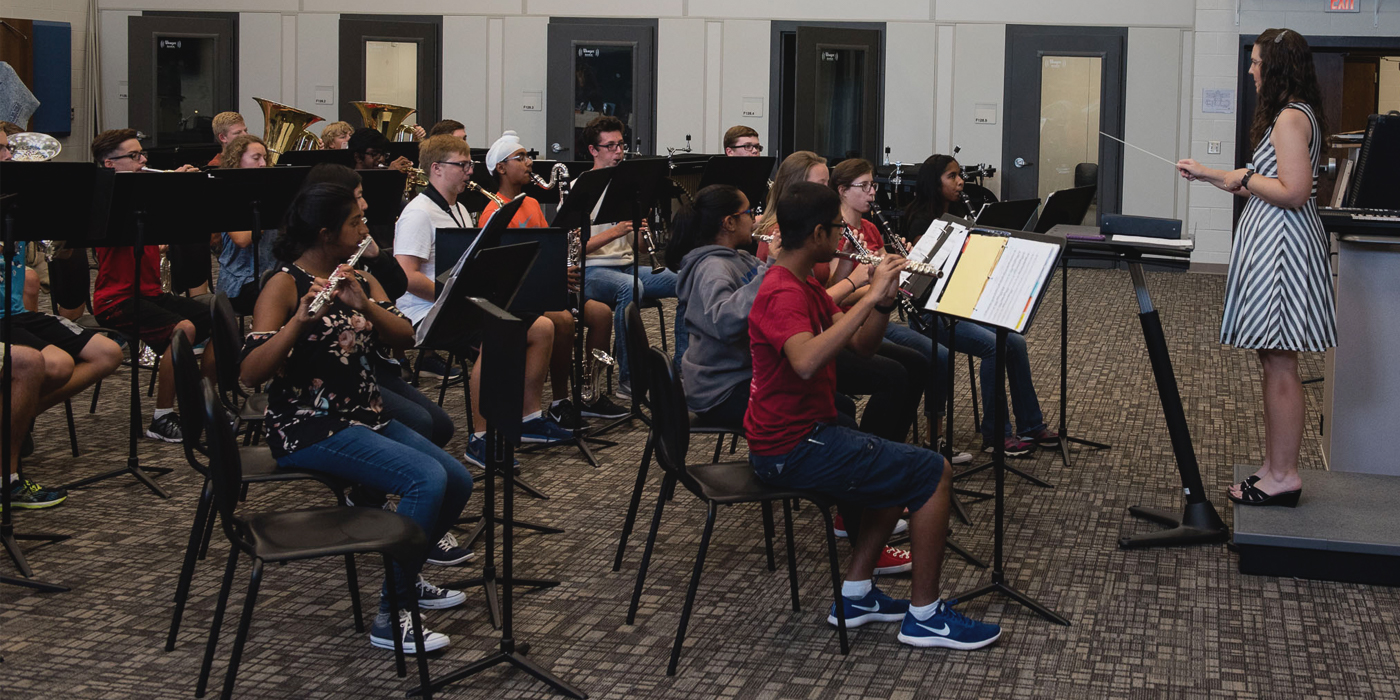 The strength and depth of a program that has multiple bands depends on the vitality of its non-varsity ensembles. Many band programs have excellent varsity bands, but I believe that in the best band programs, every band is strong, whether there are two bands or ten. Band should be just as much fun, educational, and important for students in the non-varsity band as it is for those in the varsity ensemble.

Setting the non-varsity band up for success begins with the band placement process. Whatever process you use, publish the specifics so that students and parents understand how students are placed into ensembles.

One question you must answer is how seniority should factor into the decision. Should students be placed into higher bands simply because they are older, even if they don’t play as well as some of the younger students? There are challenges in having older students in a non-varsity band. These students often feel embarrassed by their placement and may act out, becoming disruptive or apathetic. These negative attitudes may influence younger, more eager students, making it difficult to create a culture of excellence. At the same time, though, when it’s obvious that an older student who hasn’t done the work has been rewarded simply for seniority, what kind of message does that send about the importance of work ethic? Every situation is different, and you must make a case-by-case decision based on what is best for the student and for the band program as a whole.

Inevitably some older students will end up in the non-varsity band. Prevent negative reactions by appointing these students as leaders and models. Talk with them about their important leadership role in helping the younger students understand the expectations. They still may not be your strongest players, but find something they can do well (tone quality, counting rhythms, scales, etc.) and have them model it. Helping these students understand the importance of their role in the non-varsity band can keep them from becoming a negative influence.

I strongly caution against placing students into bands based on discipline or behavior problems. Often the director of the non-varsity band is younger and less experienced and may already struggle with classroom management. When you take all the students with behavior problems and put them in the same room, you aren’t setting that ensemble up for success. If a student is prone to being disruptive and is placed in a band below their ability level, they’ll become frustrated and bored because the music is too easy for them, making them even more likely to act out. Things run most smoothly when students are placed in the band that most closely matches their ability level and thus students who may exhibit poor discipline are spread out among all bands.

Similarities to the Varsity Band

Students in non-varsity bands can easily perceive they are being looked down on or treated as unimportant. You can combat this by treating the non-varsity and varsity bands similarly as often as possible. This starts with having the same fundamentals or warmups for all ensembles. Clearly these can be modified to fit each group’s ability level (range, tempo, number of keys, etc.), but it’s important for students to know that all bands are working on the same concepts. This can extend to repertoire as well.  You could perform a mass band piece at a concert once a year with all your bands, or the non-varsity band could perform one movement or an easier arrangement of a piece that the varsity band has played.

Furthermore, the expectations for all bands should be the same. If the varsity band does pass-offs, objective sheets, or recordings of Region music, the non-varsity band should do the same. The material will be different (easier or fewer objectives, shorter cuts of the Region music), but the expectations should be the same. The methods to reach these expectations and hold the non-varsity students accountable will also be different. Varsity students will often be more independent and proactive in submitting recordings and passing off music and objectives.

With non-varsity students, you may have to work with them individually to help them get these things done. You may have to bring them into your office to pass off objectives when you see them just sitting in the band hall before school. You may have to modify their marching music or break it into smaller chunks to help them pass it off. It may seem like by doing these things you aren’t holding them accountable for their actions, but I believe it’s the opposite. You are letting them know that expectations of the band are not optional. These strategies take more time and effort on your part as a director, but they are worth it.

How do we motivate our non-varsity students to love making music, to be committed to band, and to always improve as musicians? Often these students need a lot of encouragement. They may lack confidence and believe that they lack musical talent. Look for the good qualities in these students, musical and non-musical, and share with them what you see. Perhaps they count rhythms well, have a good tone quality, catch on to theory concepts quickly, or do a great job setting up chairs and stands each day. Make a big deal out of whatever they do well!

Furthermore, help your students develop healthy attributions for their successes or failures. Guide them in evaluating results and understanding the causes. If we can help our students attribute their results to factors over which they have control, such as effort (amount of practicing) and strategy (practice methods) rather than unchangeable factors such as talent (I’m just not a good trumpet player) or luck (my directors just don’t like me), we will motivate them to work harder in future musical endeavors.

Work to develop a sense of team pride in the non-varsity band. This often comes naturally during marching season but takes more deliberate work in the concert setting. Celebrate musical and nonmusical successes, both of the ensemble and individuals. Never fail to recognize a member of the band who earns an award or achieves success, whether in band or another activity. Celebrate birthdays! Perhaps consider doing a service project together as an ensemble. These ideas will promote a spirit of teamwork and create a stronger investment in the band program.

Building for the Future

The non-varsity band often consists of many younger students who are the future of the band program. Talk with these students about the future and about the roles they will play in the band in the coming years. Tell them about their leadership potential, and offer them stories about students who were in the non-varsity band and who were excellent leaders and outstanding musicians in the band. If a former member of the non-varsity band became a drum major or an All-State musician, make a huge deal out of that! Always emphasize what these students did to attain great success. This will help your students connect their actions with their outcomes.

If possible, find a time to sit down with each of your non-varsity students near the end of the year. Talk with them about their goals for the upcoming year, and guide them in setting specific, attainable goals. Then help them create a plan to reach these goals.

If you’re a director of a non-varsity band, don’t just bide your time waiting until you get to conduct the top band. Your non-varsity students need you to create a culture of excellence for them today. When you do that, you will have an enormous impact on these students and on the entire band program.