Many commonalities exist between the band and orchestra, yet an unnecessary divide can develop between the two. As leaders of large ensembles we are united by many common factors. Some of these factors are quite obvious and others may be less so. It is clear that critical listening skills are mutually important; however, we propose that some less obvious commonalities between the band and orchestra become evident when critical listening is employed across the divide.

Regardless of ensemble age or stage of skill development, critical listening ability is fundamental to all music-making. Musicians must listen to other players in their section; musicians must listen across sections to know how their part fits in; the conductor must listen to the ensemble (in multiple senses) to appropriately guide it; and conductors must listen across disciplines, genres, and styles to what their colleagues are doing. It is easy to become immersed in only the sound of our specific ensemble and only the culture of our area, yet there is much we can learn from each other.

What follows are some observations from the perspectives of both a wind and an orchestra conductor. In both of our experiences, we have learned to be better teachers by critically listening to other types of ensembles and by discussing the fundamental strengths and weaknesses of both the band and orchestra.

In this first of two posts, we will focus on a wind conductor’s view and look at things that bands can learn from orchestras.

A string section is capable of producing a far more transparent sound through which featured winds can easily project. In the band world, supporting voices are often large in number (perhaps a full clarinet, saxophone, flute, or brass section). The larger the number of wind players on supporting material, the harder it is to bring forward the intended leading line. Large numbers of strings do not create as dense a sound as large numbers of winds.

The first step to a transparent band is to imagine a sound that one can hear through rather than the typical thick, heavy sound that is produced easily. Some possible means of working towards this transparency include altering dynamics, blend, and/or balance of sound to improve the overall clarity and balance of the band. These elements of a score cannot be fully communicated through notation.

A clear internal image of a transparent end result will require altered dynamics, careful decisions to balance and blend sections of the ensemble, and awareness of the hierarchy of layers in a score. Realizing that sometimes supporting content in a score should be more felt than heard can make an enormous difference.

Often times supporting lines can be quite technical. Wind players can subconsciously force this sound while strings in a similar role remain transparent. Understanding that ornate material may be intended to remain in the background can greatly improve the transparency of bands.

The nature of string playing tends to be more horizontal versus the vertical tendency of wind playing. As a result of the construction of string instruments, an entire string section resonates fairly easily. Each instrument is itself a resonating body, as the wooden instrument sympathetically vibrates with the string, allowing a large string section to create a truly sustained, legato sound when appropriate. There is a considerable amount of sound “left over” after the musician has ceased his/her efforts to make it.

The same cannot be said for woodwind and brass instruments. Bands often underachieve in establishing a clear legato, especially when a passage is articulated rather than slurred—the sound stops when the air stops. What this can mean is that the band must actually work even HARDER than a string section to create a truly resonant sound. Essentially, the goal is to create the illusion of resonance because it will not occur naturally. Note length in the band can be dry and short when unnecessary (vertical) and attacks can be too strong with little resonance that follows. Making attacks/releases more round by controlling the speed of the air in relation to the tongue can help create the illusion of resonance. The Art of Wind Playing by Arthur Weisberg provides a fantastic resource and visual guide to illustrate these concepts.

In the band, the need to breathe and the quality of air speed can interfere with a horizontal sound. The use of stagger breathing when possible can create the illusion of long resonant lines when they are not physically possible. An end of a phrase does not necessarily mean a breath. Increasing an awareness of long lines and connection of notes is important. Perhaps visual examples (drawing note shapes or using metaphors) and aural examples (a string section) can be helpful.

In the orchestra, a string section with small numbers of winds has a tremendous capacity to play at extremely soft dynamics as well as strong. Because the dynamic comfort zone of wind players is much louder than their string counterparts, bands tend to play at primarily strong dynamics. As a result, they settle for piano dynamics that are actually much closer to mezzo forte or stronger. In addition, many wind players strive to hear themselves, whereas string players tend to hide within the section (also adding to overall balance and blend).

It is of great importance that wind players are pushed to develop their soft extreme in order to contrast their forte extreme, all while not sacrificing tone quality, intonation, or technique.

Visual aids such as imagery, simile, metaphor, can make this concept tangible. For example: “The brass must be a shadow of the oboe,” or “Imagine the intensity of air needed to inflate a water balloon.”

At soft dynamics, breath is critical. A tremendous intensity of air speed and support is needed to achieve piano dynamics in wind playing. In addition, the concept of “hiding” in the sound of others is relevant in this case. An individual must strive to hear the surrounding musicians rather than him or herself.

As a side note, the notion of a section player “hiding”—blending in, fitting in, producing a sound that doesn’t stick out, etc.—is one of the central questions of ensemble playing. It can manifest itself both positively and negatively, depending on the context. Determining the context is key for both conductors and students, as is the ability to perform as both a leading and a hidden voice.

Orchestral wind parts are usually not doubled, forcing the individual musician to be independent. Multiple players per part in bands allow students to hide in a section (especially young bands), developing fewer skills of independence. In this case, hiding becomes negative. Programming band repertoire that demands more independence can help develop greater individual musicianship as can rotating parts within a section. In addition, the large ensemble rehearsal process can be approached as a series of chamber interactions to develop greater individual musicianship and engage musicians. Guiding their listening, having students take part in the musical decision-making process, expecting students to recognize when they are primary or secondary material, and rehearsing without a conductor at times can all bolster a sense of independence.

In keeping with ensemble independence, string sections move together with unified bowings and often display phrase elements in their body movements. Principal strings also have a great deal of responsibility in making musical decisions and communicating these to their section.

Bands are usually still and often rigid in their physical execution. The awareness of expressive movement will not only improve individual musicianship, but will also increase individual responsibility. Reading physical movements, especially of principal players, will help to unify the ensemble and increase musical communication. Guide their eyes as well as their ears to engage the need and willingness to move!

Parallel of Breath and Articulation to Bowings

For string playing, the weight and speed of the bowstroke have a direct correlation to the attack and speed of the air in wind playing. Awareness of this correlation can influence the technical approach of the wind player. For example, a sfz in central European repertoire tends to requires a faster bow speed but not an attack of the string. Similarly for a wind player, a sfz in this style requires a faster burst of air but NOT a harsh tongue.

The vocabulary of bowings from which strings draw create sonic variety. An advantage in string playing is that this technique is visible, while in wind playing the technique is internal and therefore can be difficult to identify.

In the band setting, a discussion of different bowings (such as arco, pizzicato, spiccato, detaché, etc.) can provide a broader and more visual model of possibilities for wind players. A wide variety of syllables, consonants, and air speeds to attack and sustain (or lack thereof) can be applied for stylistic results. This is a common technique in jazz rehearsals, but many concert bands stick with ta, which creates more problems than it solves.

In part two of this discussion, we’ll take the orchestra conductor’s view and explore what orchestras can learn from bands. 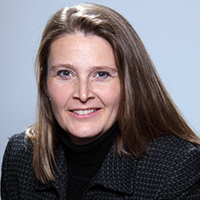 Dr. Erica J. Neidlinger is associate professor and wind conductor at DePaul University in Chicago. Her additional responsibilities include teaching courses in wind history and repertoire, conducting courses, and instrumental music education courses. Dr. Neidlinger’s conducting experiences are broad, ranging from chamber ensembles, contemporary ensembles, symphonic bands, and wind ensembles. She has conducted performances across the United States and in Europe and has traveled to Singapore and Canada as an ensemble adjudicator and clinician. Neidlinger has been a featured guest conductor and clinician in Latvia and in 2017 will be featured as a guest conductor and clinician in Moscow, Russia.