I was honored this year to present a talk at both the Midwest Clinic and the IMEA (Indiana Music Education Association) conference entitled “Foundations for Successful Oboe Students.” I decided to propose this title because of my experience teaching beginning oboe students, and my understanding of the challenges they face in the first few years of playing the “ill wind that no one blows good.” (I disagree with this quote, of course!) In addition, many band directors and music education majors have asked for help, sometimes in confidence (“the oboe scares me” is not an uncommon sentiment).

Avoid this Common (and Serious) Mistake

I believe many directors make a huge mistake with middle school-aged oboists in their first years of playing; they ask these beginning oboe students to “play quietly.” While other wind/brass instruments are encouraged to play out in order to achieve full sounds, the oboe section of a beginning band, most often in the front row, is given “the hand” and told to play softer, lest their beginning tone quality completely dominate the band! This is understandable, as a loud beginning oboist has what even kind people might call a “strident” tone. However, by shushing a young oboist, the director is inadvertently causing multiple bad habits, horrendous intonation, and poor articulation/response that will be difficult to undo in future years.

The reasons for this are simple to understand if you play the oboe at a professional level, but many directors are not oboists. A dark, warm, pleasing oboe sound comes from resistance of the reed, first and foremost. An “easy” reed (or beginning/student/soft reed) is almost always scraped too thin, making the vibrations easier to achieve without much air support. The result is a loud, quacky oboe reed that is unstable and can easily be overblown. Give this reed to beginners and ask everyone to use a strong stream of air, and you have a gaggle of young oboe-ducks who can be heard for miles and miles.

The answer to this dilemma is not as simple as putting a beginner on a professional strength reed. Beginning students do not have the embouchure/air combination to play on a reed that a professional would use. Neither is the answer found in giving a beginning student a too-easy reed with no resistance built in. They will never learn the proper air support/embouchure combination needed to eventually develop a mature sound.

My solution lies in between. There are modified reeds, made by professionals, which are stable yet manageable for younger students. Also, harder strength reeds can be adjusted to have a smaller opening for beginning oboists, especially if there is a professional oboist who is available for working on reeds, during lessons or for the band. The most important thing a band director can do to encourage good habits in young oboists, though, is to tell them to play “loud and proud.” Move them into the second or third row of your band, if necessary.

Understand that the mechanics of playing softly on the oboe are different from other wind instruments – playing softly on the oboe requires air to be held back, or filtered, in the throat, mouth, or lips, and sometimes all three. This makes playing softly feel like MORE work than playing loudly, due to increasing the already high amount of back pressure that is inherent to a good oboe sound. Until proper diaphragmatic support is established, there is no way to play quietly in the correct way. Instead, the “shushed” young oboist will bite the (too easy) reed, which will make the pitch soar and close the opening of the reed, which greatly reduces their ability to articulate notes. A year or two of this type of playing can take MANY YEARS to undo – well into high school or college, if at all, and only with the patient help of a professional oboist.

High school directors – do your oboe students play incredibly sharp, especially while playing quietly? Are you afraid of clean attacks? Do you program music that does not prominently feature the oboe? If so, you are not alone! In many cases, you can trace these problems to the beginning years, bad reeds, discouraging proper air support, and general queasiness over the beginning oboe sound. Trust me – establish good habits in the first few years with smaller yet resistant reeds, full support, and confidence, and (instead of ducks) you will have a wonderful gaggle of oboe swans for your advanced ensembles. 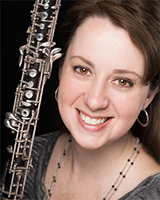 Professor Pamela Ajango (French) teaches at Butler University and the University of Indianapolis, and is a freelance oboist in Indianapolis. She performs as a member of the Indianapolis Chamber Orchestra, the Indianapolis Symphony Orchestra’s quintet, with visiting Broadway shows, and as a recording artist for FJH, Alfred Publishing, and others. From 1996-2002, Ms. Ajango was a freelancer in NYC, playing with top orchestras, in recording studios, and on Broadway. She studied with Malcolm Smith, Ralph Gomberg, Joseph Robinson, and Stephen Taylor. She received degrees from Boston University and the Manhattan School of Music. Active at the International Double Reed Society’s conferences, Ajango has lectured on creating/sustaining a music career, presented a recital of new quintet arrangements, and recently commissioned a work for oboe, bassoon, and piano, Variations, by Matthew Bridgham. In 2011 Pamela premiered the solo oboe piece The Empty Sky, which was written for her by Frank Felice.