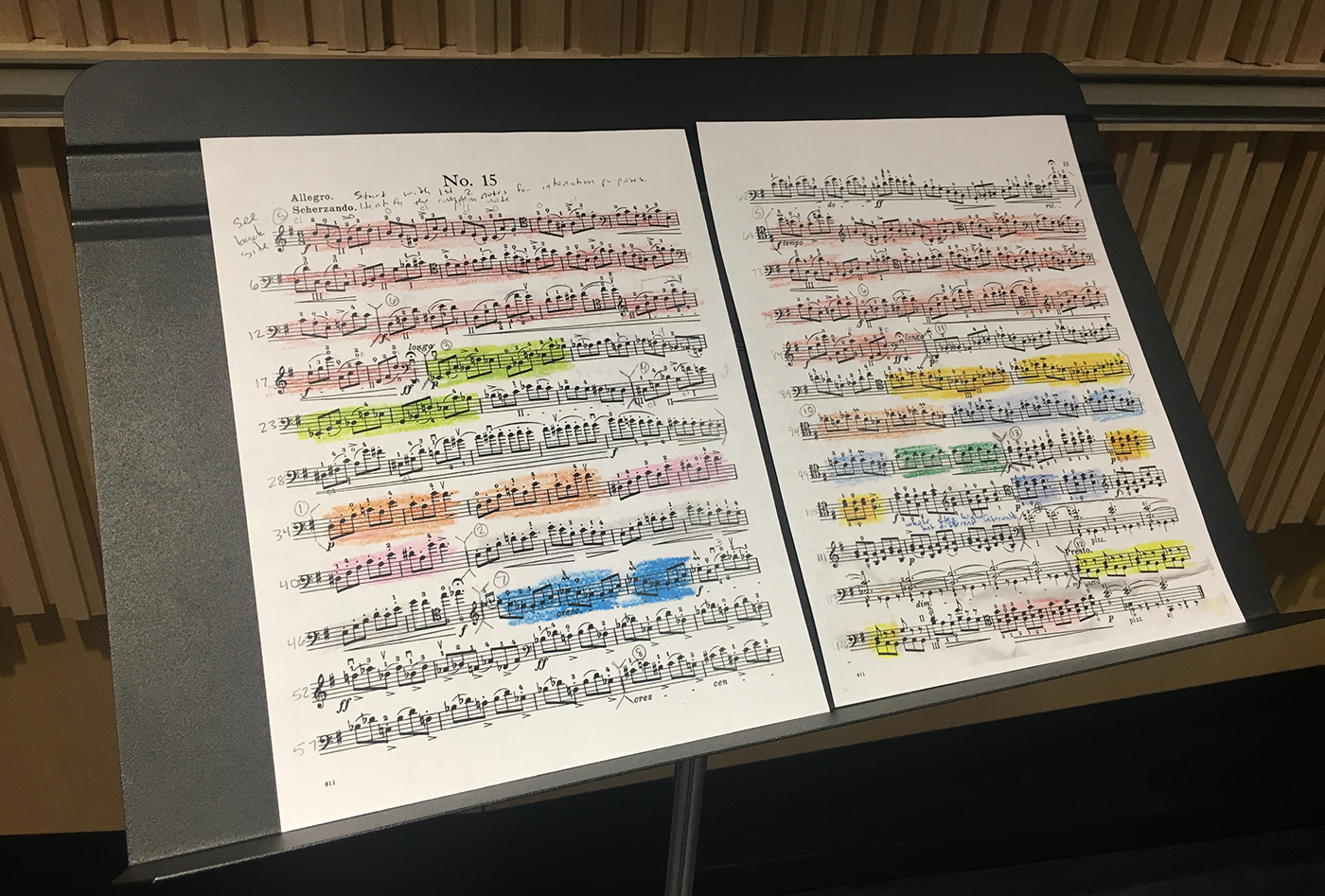 Opening a book of cello etudes such as those of Duport, Popper, Piatti, etc. can bring about a sense of fear and panic in our students. “How do I approach this? Where do I begin?” Like most endeavors, the secret is in breaking the work down into smaller tasks. As students experience success with some of these smaller tasks, they’ll realize that they are making progress towards that goal that may have seemed unobtainable. I use a process of bracketing with my students that helps them identify how to break the work of preparing a piece for performance into smaller, bite-sized tasks. While my focus is on playing cello etudes, much of the process is the same for any other instrument or music preparation challenge.

One of the first things I ask of my students is to purchase their own set of the etudes we will be working on, in order to respect copyright laws. Then, I will ask them to make a copy of the particular etude we will be studying, so they can make whatever markings they want to on it. In that way, they will have a practice copy and a performance copy. Ideally, the practice copy will be marked up so much that they would not want to use this in their performance, yet they won’t have to spend time and effort erasing markings later. In addition, this also ensures they will retain something to refer to later. This can be helpful if they choose to subsequently rework the piece themselves, or as a reference when working with future students.

Isn’t Homework Only for Core Subjects?

Not exactly! Though most of a musician’s homework is to practice, devoting some time to “book study” prior playing a piece for the first time can be time well spent. In fact, this study can reduce the need for rehearsal time and reduce frustration. Taking time to draw a “road map” of the etude will help to heighten the understanding of what the composer was trying to create when writing it. For students considering going on to music study in college, this “book study” will also introduce them to the Form and Analysis classes they may have to take. All etudes, from the simplest to the most advanced, can be broken down into smaller passages to facilitate learning.

I recently presented a clinic titled “From the Couch to the All-State Cello Section” at the Texas Music Educators Association conference in San Antonio. In that session  I specifically detailed cello etudes No. 15 and 17 of David Popper, and No. 16 of Merk, which were recently used as audition material for the Texas all-state orchestras. In my own analysis, I bracketed these entire etudes into smaller sections, mainly by eight-measure phrases, or where there were natural breaks. Some sections had as few as six measures, while others had as many as 10-12 measures.

The main reason for the bracketing is to prevent students (and myself) from “rambling aimlessly” through the entire etude, and instead to focus on working on one section at a time. It is more efficient to do more repetition with fewer measures than to do more measures with less repetition. Doing one small section more often enhances muscle memory, which results in a faster and more efficient way of learning.

According to statisticbrain.com, the average attention span of an individual is less than 20 seconds. If one were to practice an etude only from the beginning to the end consistently, the end would always sound weaker, as the average length of most etudes is more than four minutes. Also, because muscles don’t have brains, they will do what we repeatedly have them do. If they are always learning something (like an ending) at a tired state, they may likely learn it incorrectly.

How and Where to Bracket

My students and I find it most helpful to place the brackets around similar ideas. For example, imagine a descending sequence of arpeggios in which the downbeat of each measure is a step lower than the previous measure. Such a sequence would be bracketed from its beginning to its end. If the next section is a sequence in the opposite direction, it would receive another bracket, and so on. Other factors that can determine where to place the brackets include a similarity of left-hand shapes, melodic and/or rhythmic sequences, and technical passages that are completely different from anything else.

After bracketing the entire etude, I will number each section. How you number the brackets depends on the learning style of each teacher and/or student. I like to number the sections from what I see as the “easiest” section (bracket 1), to the most difficult. I will also have my students begin their learning and practicing of the etude with bracket 1, just because it is a confidence builder and gives one more motivation to continue on. If they were to start with the most difficult section, frustration and doubts are more likely to set in, possibly making one feel inept, incapable, and more likely to give up.

Have Fun with Colors

After the bracketing task is complete, I will color-code my copies of etudes, and encourage my students

to do the same. I use color-coding to identify things that are EXACTLY alike, from a one-half measure fragment that repeats, to several measures. Many etudes have identical repeated measures; when a student can identify them, they are often encouraged. These are measures they already know — they’re this much closer to working through the entire piece!

In comparing this idea to a textbook in any other school subject, students tend to spend more time with books that are colorful and visually appealing. Having colors on a copy work in the same way, versus just looking at hundreds of black notes on a white page.

I prefer crayons to colored pencils as crayons are easier to color with, just make sure to use light colors. A Popper or Duport etude can have as many as 15 different colors, so when purchasing crayons, one should buy at least a box of 24 colors. While highlighters are attractive they typically do not offer enough color options.

Slow and Steady Does Win the Race

Once the bracketing and coloring are complete, one can begin the actual practicing. I have my students

work on no more than one or two sections a day when initially learning a new etude. I suggest they play one section several times, slowly, including all correct rhythms, bow directions, articulations, tone, and pitches. I save working at final tempo until several weeks later, allowing correct muscle memory to develop before speed.

Once a performance date has been established, we set up a calendar to have the etude fully memorized and performable a month prior to the actual audition or performance date. About a month before the day of performance, I suggest they take a week to 10 days away from that music.  Such a rest will ensure it doesn’t sound worn out at the audition. Two weeks before the audition, they will practice perform it only once each day as they are allowed only one performance the day of the audition. With a few days to go before the performance, I suggest that they play everything through completely under tempo, as a way to relax, yet completely detail intonation and tone.

Great results are the product of great preparation. Instead of wondering if they have done enough preparation, I encourage my students to create and complete a 100-performance page to help them track and recognize the extent of their preparation. This is a page with 50 numbered lines on each side, with columns for the name of each etude or orchestra excerpt being studied. (Each time students practice perform one of the pieces they mark the date in the appropriate column.) Walking into an audition knowing you have performed something 100 times – to the best of your ability – is a great way to counter insecurity and boost confidence.