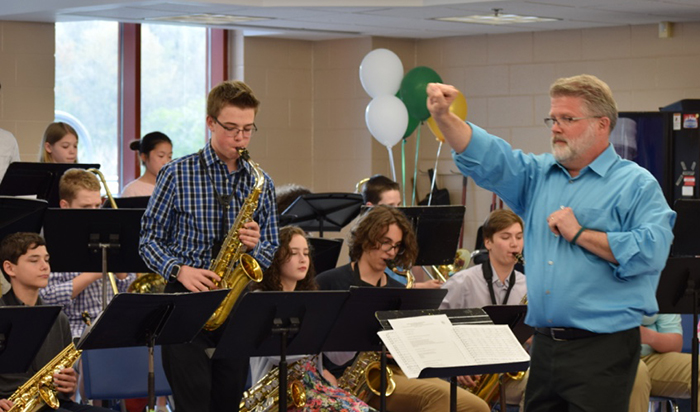 He doles out hugs like they’re candy. In fact, he doles out candy too. And Pop Tarts, Wheat Thins and ramen noodles. He lets students eat, hang out, and listen to music in his middle school band room during lunch. He once gave a student rides to early morning Big Band rehearsals when her suddenly-widowed mother couldn’t. He often shouts at his musicians—ages 11 through 14—when their playing offends his musical sensibilities. At least once a year, he kicks members of his Big Band out of the band room if he thinks they haven’t been putting in their best effort.

A student teacher observing Jamison Clark at the Trottier Middle School in Southborough, Massachusetts during the 2011/2012 school year said he was stunned by what he saw there. Clark—Trottier’s jazz/concert band and orchestra director— “Broke all teacher rules,” Scott Morrill said he was learning in graduate school. But Morrill, now a band and instrumental teacher at a Massachusetts middle school, came to see Clark as a role model. “Jamie has taught me so much about the importance of being music-focused or student-focused,” he said.

Ultimately, the unorthodox and risk-taking exploits Clark has employed during his 15 years as a music teacher have largely benefitted his students. Several examples are highlighted in my  new book “Mr. Clark’s Big Band: A Year of Laughter, Tears and Jazz in a Middle School Band Room.” Clark’s unusual teaching style was just what the 2012/2013 musicians needed to navigate the first year after the sudden death of one of their own, 12-year-old trumpet player Eric Green, who had an undiagnosed heart ailment. Clark guided the members of the Big Band through the anniversary of Green’s death, through jazz competitions, and through an emotion-laden memorial service for Green where the students mastered a complex piece, “Kaleidoscope,” written in his memory.

In an era when teachers are often expected to soften their language so as not to offend, to keep physical distance from students, and to refrain from raising their voices, Clark is an outlier. However Southborough parents, students, and fellow teachers laud Clark’s teaching techniques, particularly as he applied them in the year after Green died. Here are five lessons teachers can learn from Clark:

Torie Shakespeare, currently a college student, said when she was in middle school, she viewed the Trottier band room as a safe haven for conversations. “There was always food there. You could talk if you wanted. There was always someone, guaranteed, who was going to be there who cared about you,” she said.

There were many occasions when Clark gave her the freedom to vent, cry and worry and shared quotes and books with her to buoy her spirits. “He is the kindest person I think I’ve ever had the pleasure of knowing,” Shakespeare said.

#2. Try to Give Students What They Need

After the seemingly healthy Eric Green died in January 2012, the Trottier music students needed many things including assurance that their friend wouldn’t be forgotten and that their deep feelings of loss were acknowledged. In the band room, students needed help dealing with their fears that when they played the two pieces written in Green’s honor at a memorial event a mistake would be tantamount to dishonoring their friend.

The school planned an Eric Green celebratory event in June 2013, where the Trottier bands played original compositions. The then-Northborough-Southborough School Superintendent Charles Gobron said the unusual event was a healing moment which Clark helped orchestrate. “I was absolutely blown away by it,” he said. “How do you ever put a price on that morning? It was unifying around what’s important in life, unifying, hopeful, I think helping. I thought for the students, they got a sense of priorities in life.”

“Whenever I think of him [Clark],” Gobron said later, “I think of complete and total engagement in music and education. He reaches kids. What he brings out in students is phenomenal.”

Trottier Principal Keith Lavoie, who was initially reluctant to green-light the event, said the celebration was an important factor in giving his students closure. “We did it because that’s what the students wanted to do and what they needed,” Lavoie said. “You can’t go wrong if you take care of the kids in your school.”

For his part, on the day of the memorial event, Clark assured his young musicians that there was no way they would dishonor their friend with their performances, adding that their tremendous efforts were an expression of love.

Danielle Doherty’s father died unexpectedly at the beginning of her seventh-grade year. Her mother Julie needed Clark’s assistance if Danielle was going to continue playing in the Big Band.

Clark frequently drove Danielle, now a college student, to school and made sure she had lunch each day. “He kind of took care of her when I was struggling to keep my head above water,” Julie Doherty said. “… I always knew he was right there taking care of her.”

Tom Griffin, a teacher at Trottier, said students are drawn to Clark’s honesty. “I think they adore him,” he said. “He is so open with them and truthful. They are willing to go to the ends of the earth to do what he wants. … They trust him beyond all belief.”

Former student-teacher Morrill said students tolerate Clark’s frankness about their playing because they say he cares deeply about helping them perform their best. “I think, a lot of time, teachers sugarcoat,” he said. “You know something, they needed [the honesty]. A lot of times, you get from teachers, ‘That’s good.’ What is ‘good?’ Sometimes you need colorful, graphic language.”

Brady said Clark’s propensity to yell on occasion comes from a place of authenticity. “There’s a level of sincerity there,” he said. “They’re probably playing lousy. He’s not going to lie to you. He’s truthful.”

Students say they believe his unvarnished honesty and shouting is driven by his affection for his students and desire to motivate. “When he’s yelling, I always feel like it’s for our benefit,” Natalie*, a 2012/2013 member of the Big Band, said.

#5. Be Your Authentic Self

Brady said Clark does not hold back on his humor, his goofiness, his enthusiasm or on his mischievousness. “The way I think of Jamie is my Robin Williams. He’s the genie in ‘Aladdin.’ He’s our permanent comic relief,” he said.

Danny*, a 2012/2013 Big Band saxophone player, relished Clark’s genuineness: “He uses a lot of sarcasm. He tells us a lot of jokes. He yells a lot. He treats us like his kids. In his room, if you want to hang up a sign, go ahead. You can write on the whiteboard.” This student added that he didn’t “hug anyone else [in Trottier] other than Mr. Clark.”

Clark’s inclination to allow students witness his entire range of emotions—from angry, disappointed and sad, to happy and playful—makes students feel as though they too can freely express themselves in his band room.

“He puts himself out there,” Shakespeare said. “I’ve seen him cry on multiple occasions.” When she got waitlisted at a school and was devastated, she went to the band room in tears. “He just cries with you. How many teachers would do that?”

*Students interviewed during the 2012/2013 year were given pseudonyms.
Jamie Clark photo by Sharon Shoemaker, Meredith O’Brien photo by Nancy Gould.